I am definitely someone who enjoys going to the theatre and so when a chance to go and see Macbeth (there I've mentioned it - whoops) came along I couldn't resist!﻿  The production was put on by the Singapore Repertory Theatre Company and marketed as Shakespeare in the Park (so a good excuse to bring a picnic) as it is being performed in Fort Canning Park.  I've written about the park, on a more general level, previously and you can read about that here. 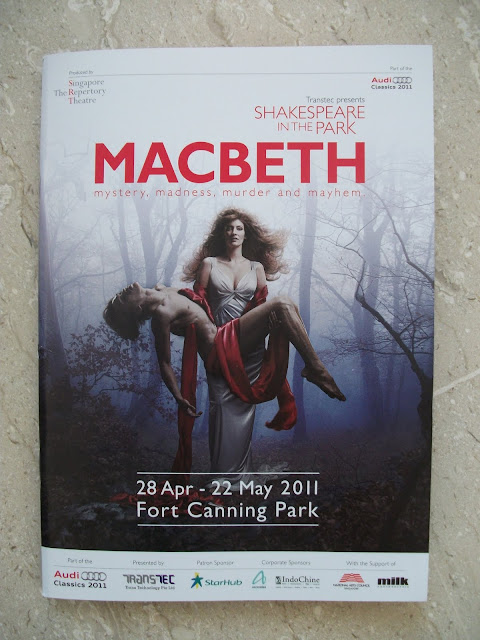 The big advantage of going to an open air event here, in comparison to the UK, is that even when the sun goes down it is still wonderfully warm and you don't suddenly wish you'd bought a thicker coat with you.  As long as it doesn't decide to rain .... fortunately for us that was not the case.  There was some distant lightening which coincidentally was when the witches were on stage but this just added to the atmosphere.

The theatre company stuck true to the script but modernised it with up-to-date costumes and props.  I studied Macbeth at school so knew the play but even for those not familiar with it, it is a play that is easy to enjoy and has as much relevance today as it did when it was written.  The cast were a mix of local, American and British actors and were all very good.  I certainly got the impression, from everyone sitting around us, that they were all fully engrossed and enjoying their night out.

As I said like many outdoor events I've been to in the UK this was a good excuse to take a picnic (though we actually bought some food and drink there - we weren't very organised so were glad they had food etc. on sale).  The one thing we did do beforehand was make sure we drenched ourselves in bug spray, as many people were also doing when we arrived, which fortunately seemed to pay off.  We've definitely learnt the hard way previously and been covered in bites.

Afterwards we actually made a chance discovery of a hotel we did not know even existed, the Fort Canning hotel which not surprisingly is in the park.  The building is big enough and although I've seen it I'm not sure how I never realised it was actually a hotel!  In my defence though I don't recall seeing or reading anything about this hotel but they have a good bar which made a nice location for post theatre drinks.

A thoroughly entertaining night and if, by any chance, you manage to get to see it before it finishes go go go!
Email Post
Labels: concerts and plays drinking festivals and events food Fort Canning Park parks and gardens photos places to visit Shakespeare Singapore things to see weather wildlife
Location: Canning Rise, Singapore