No I haven't suddenly moved to Mexico and not mentioned it but this post is connected to that event celebrated on the 5 May each year.  I actually was not even aware of this occasion until a last minute open invite by a fellow blogger saw us join her and her husband at one of the bars along Boat Quay to enjoy the fun.

Having now done a bit of background reading on this festival I gather it is a celebration to commemorate the Mexican army's unlikely victory over the French at the Battle of Puebla on the 5 May 1862.  Sounds like a good enough reason to have a party to me.

The bar we went to is called the Prince of Wales which serves, what I'm told though I haven't tried it, good, reasonably priced Mexican food.  Obviously therefore a Mexican celebration was a good reason for them to hold a special night at their bar.  It was a fun evening with a band, live music and singing and the bar had also organised a pinata.  In case you don't know a pinata is a brightly coloured decorated container which is full of sweets and other treats.  It is usually hung up for people to hit it with a stick to attempt to break the pinata and get the sweets out. 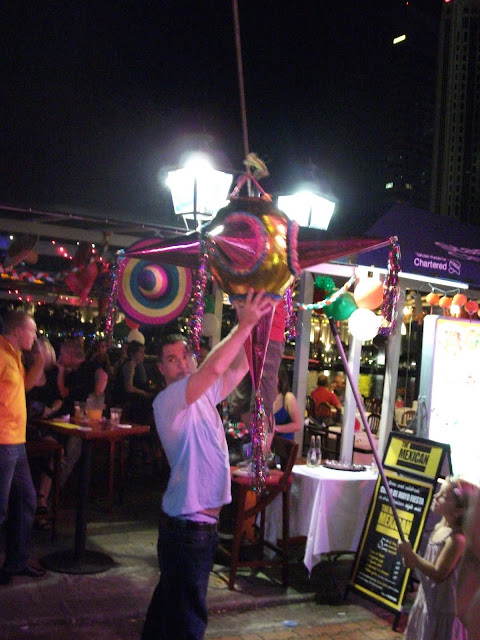 For those not familiar with the layout of Boat Quay, the bars and restaurants along this stretch are housed in the old shophouse style buildings.  There is a pedestrianised walkway between the bars etc. and on the opposite side each bar and restaurant has more seating stretching towards the river which then provides a nice view.  Hopefully the photo below will give you an idea of what I mean even if you cannot see the river or view in this one. 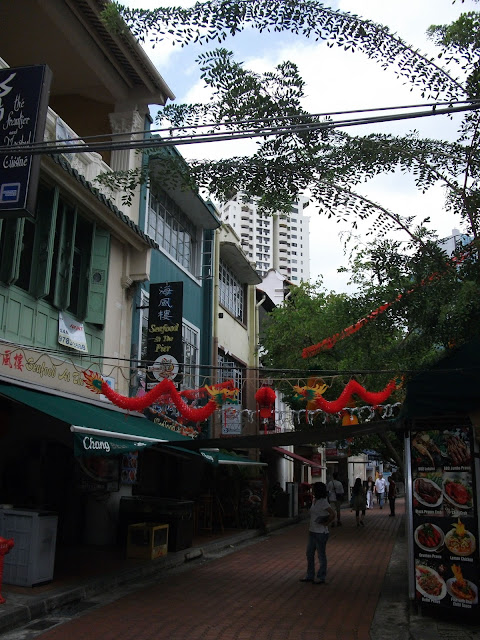 So the pinata was strung between the bar on the one side and the additional seating on the opposite, a number of willing volunteers were selected to be blindfolded, spun around and then left to see if they could hit it.  Eventually after several people had had a go the pinata was broken and there was then a mad scramble to pick up the sweets, money off vouchers for the bar etc. as you can see in the photo above.  What was totally unplanned turned out to be an unexpectedly fun night out, isn't that often the way though?
Email Post
Labels: Boat Quay Cinco de Mayo drinking festivals and events food nightlife photos places to visit shophouses Singapore things to see