We recently went jungle trekking (kind of) in Bukit Timah nature reserve.  We've previously been to the MacRitchie Reservoir so, unlike then, when I don't think I really realised what I was letting myself in for I was slightly more prepared for this trip.  I knew I would get very hot so to take plenty of water and that it would probably mean a fair bit of walking.  However it was still a bit of a surprise to be greeted with such a steep initial climb to reach the summit.

I should explain that the nature reserve actually boasts Singapore's highest point, Bukit Timah.  It's only 163m so, alright, is not that high, but when you've got used to living in a relatively flat place and in the heat and humidity here I certainly knew I'd done that climb when we reached the top. 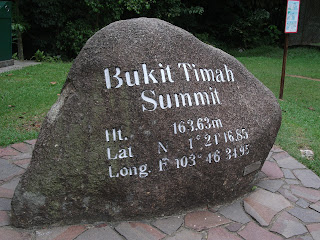 Bukit is the Malay word for hill and Bukit Timah translates as Tin Hill.  The hill has no links to tin (although there was a granite quarry here for many years) but it is suggested it got its name through a misunderstanding.  Its original Malay name was Bukit Temak, meaning 'hill of the Temak trees' due to a tree that grew in large numbers in the area.  However to the untrained Western ear Temak sounded like Timah and the hill was named as such.  There is also a suggestion that Timah is an abbreviation of Fatimah which is a popular girl's name in Malay.

The reserve is the last remaining area of primary rainforest in Singapore. I imagine this was what Singapore used to be like. Albeit without the carefully laid out paths through the jungle. 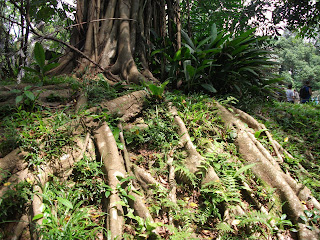 The reserve houses a vast array of species of plants and is considered a haven, with one naturalist estimating that there are more species in this area than in the whole of North America. This area and the Central Catchment Nature Reserve besides it are said to be home to approximately 840 species of flowering plants and 500 species of fauna. There is also plenty of wildlife here, we saw long-tailed macaques, beautiful butterflies and heard many cicadas and other insects in amongst the foliage. 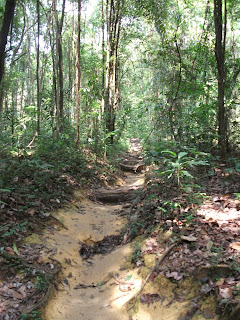 When we reached the summit I was a little disappointed by how restricted the view is there considering it is the highest point on the island but it still felt an achievement.  We took a fairly straightforward route to the top (there are a number of paths you can follow) which included several rest points which were warmly welcomed.  For those who know the reserve we took the option of not climbing the steps to the top but took them coming back down again instead.  Before then deciding to venture off on to some of the other narrower paths to see more of the jungle.  This certainly meant being aware of where we trod as we negotiated the many tree roots, rocks and steep steps along the paths.  These paths were a lot quieter than the main routes up to the summit and the summit itself so, we hoped, would give us a greater chance of seeing some wildlife.  As we went at a weekend it was very busy and not everyone out walking was being that considerate of others who were perhaps hoping to see the wildlife there or just enjoy the tranquility of the place.  I would definitely suggest venturing off the main tracks if you want to really enjoy the contrast from the bustle of the city.

Although I think we got a bit lost whilst walking around we eventually found our way back to civilisation. By that point I was more than ready for some food and refreshment so welcomed the sight of roads and cars again. It still seemed strange, when we did though, to know that literally just behind us was a rainforest and such a contrast to the ﻿the world we had returned back to. 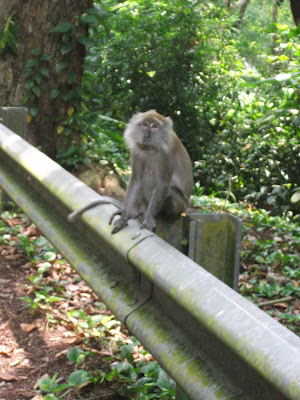 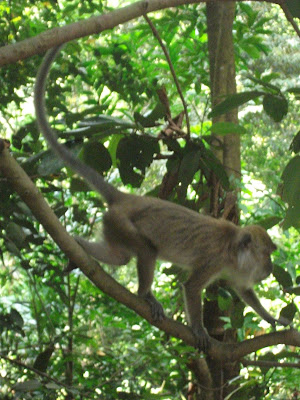