I have to say that my husband is generally a little more adventurous with food than I am and not so long ago he decided, along with some friends of ours, to try something he's been curious about for a long while. Here's his post about his first experience trying Sup Tulang.


Earlier this year we had some visitors from the UK and I took the opportunity to try a dish I’d been meaning to have for a number of years but never seemed to get around to. That was Rojak, which was consumed in the excellent Satay by the Bay part of the Gardens by the Bay complex, (we had done the Flower Dome and were on the way to the Supertree Grove Skyway) it was tangy, crunchy and wonderful, why did it take so long to have? As a result I began to wonder what else I’d been missing out upon and vowed to be more adventurous and eat new stuff (or new to me anyway). First on the list was Sup Tulang.

Sup Tulang is essentially a bright shockingly red coloured soup made with mutton shanks. The shanks are served whole with the marrow still inside the bone cavity. One is expected to peel the remaining meat off the shank and suck the marrow out of the bone with a straw. Given the colour, the dish looks reasonably gruesome.

Attention to the dish was peaked by its inclusion on one of Anthony Bourdain’s Singapore TV travel programmes that was recently shown again on the travel and leisure channel, TLC. In the show the anchor tries Sup Tulang with fellow celebrity chef Bobby Chinn.

So having roped in a couple of very willing volunteers (the owner of this blog decided that she could miss out upon the experience) we set off in search of culinary adventure. The dish is available within the Golden Mile Food Centre, not to be confused with the Golden Mile Complex across the road. Initially and mistakenly we started our search here, however and with rising spirits of failure, relief and escape we realised our mistake and found the correct location. 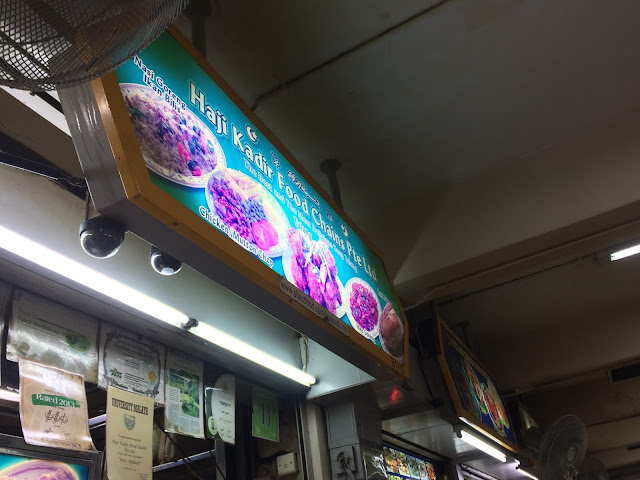 Once in the right place we quickly found the stall, Haji Kadir (run by an extremely affable chap, who may have been surprised by the adventurers wanting to try his dish) and the said dish was ordered. The adventure was about to begin, but not before two large bottles of Tiger had been purveyed from the drinks vendor across the other side of the food centre’s basement.

When the dish arrived it was indeed bright red, almost vampire blood like in its appearance, and was served with French bread (a sliced up baguette if you are sophisticated) that was a tad stale, this didn’t matter as the bread is dipped in the red sauce and mixed with the chili and vegetables (white cabbage). Given that the sauce was bright red we had assumed that it would be hotter than Hades but were pleasantly surprised by the flavour of this gruesome looking dish, reckon it would be great to serve up at a Halloween Feast. The meat falls off the bone and is incredibly tender as it has been braised (as opposed to roasted) and tastes of wonderful lamb. The next stage of the process is to suck the marrow out of the bone cavity with a straw acquired from the drinks Auntie or the proprietor of the sup tulang stall. The technique is to bash the marrow into a liquid in the cavity tube with the straw (or a plastic spoon handle) and suck it up quickly without looking at what you are doing, it looks like mushed up brain but tastes of intense mutton. 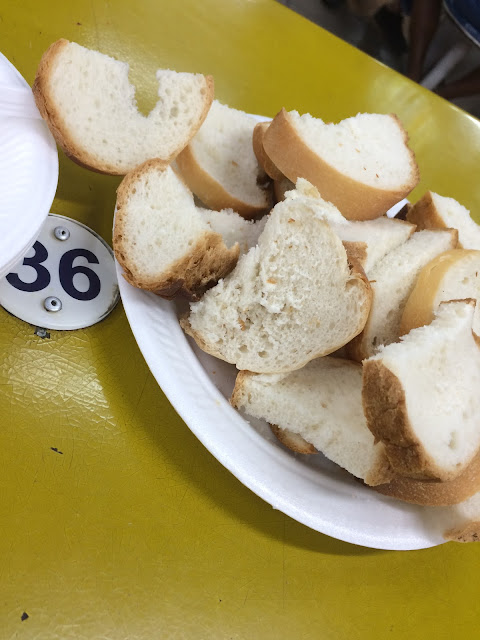 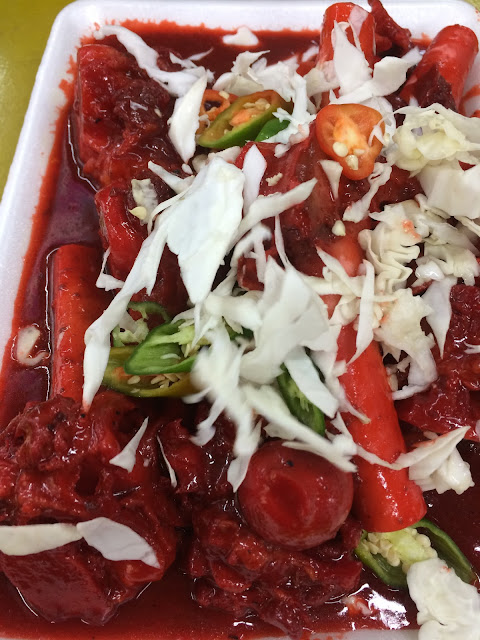 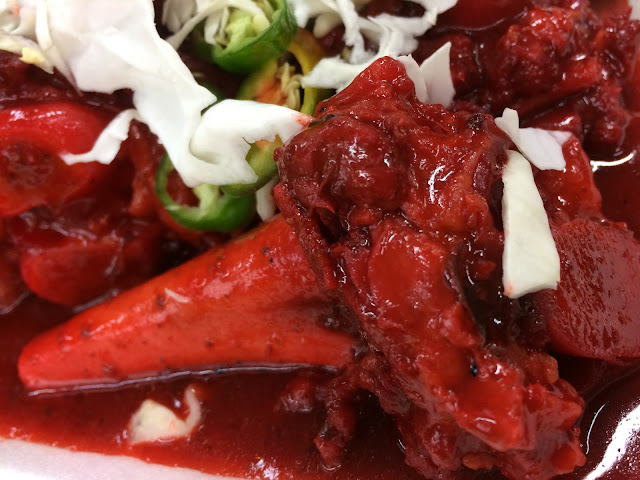 The dish is messy to eat and stains your fingers so you look like you have committed a terrible crime. Take many many tissues or buy them from the Auntie or Uncle that will come to you and lastly don’t wear white!

The Golden Mile Food Centre is on Beach Road, past the Park Royal Hotel and lots of fishing tackle shops, with the nearest MRT probably being Nicoll Highway or a trek from Bugis.