I've had a long held interest in cemeteries and so the Japanese cemetery park had been on my list of places I wanted to get to for a very long time. Although not on the doorstep of Kovan MRT I decided it was still a doable walk (in reality about a twenty to twenty-five minute, very pleasant walk at a steady pace) and decided to make that my next Red Dot Roaming stop. 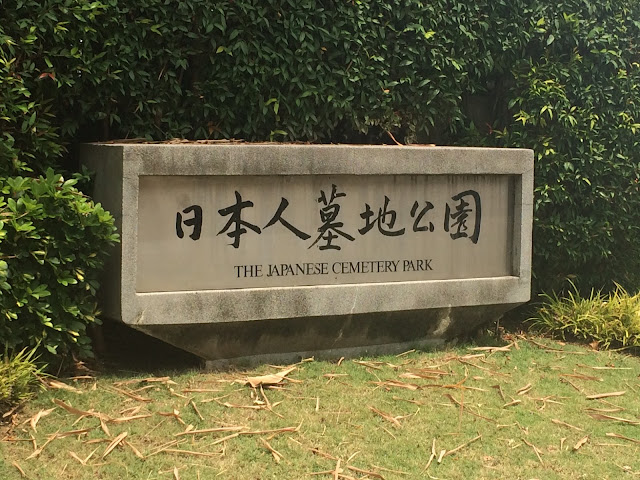 The Japanese cemetery park is the largest in South East Asia and contains within it the remains of Japanese prostitutes, civilians, soldiers and also convicted war criminals who were executed at Changi prison. It was established in 1891 to serve the burial needs of the Japanese living in Singapore. Three brothel keepers got the original government approval for a cemetery for the destitute Japanese prostitutes known as karayuki-san, who made up the biggest percentage of the Japanese population working in Singapore at that time, to have a final resting place here. The founders of the cemetery also owned rubber estates and so combined some of their own land with some public land to establish the graveyard. Gradually the cemetery was subsequently used to bury other members of the Japanese community from a whole variety of professions.

At the end of the Japanese Occupation of Singapore a number of tombs and memorials were erected to commemorate the war dead. This includes a memorial for a number of Japanese war criminals who were executed at Changi prison for war time atrocities including the Sook Ching massacre, a military operation aimed at removing anti-Japanese elements from the Chinese community in Singapore. The cemetery was closed for burials in 1973 and named a memorial park in 1987. 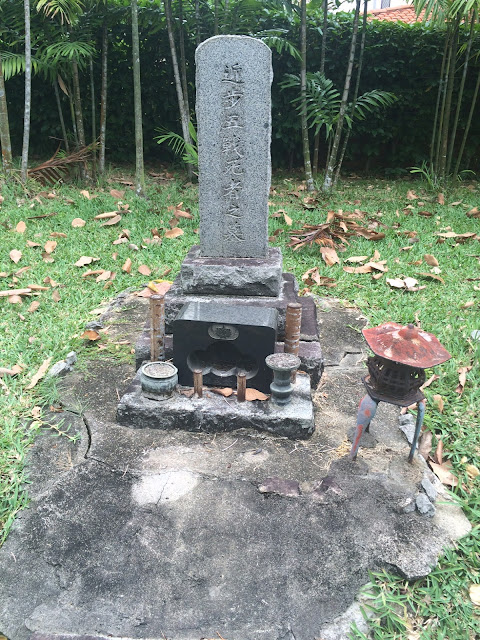 As you might expect there are also a few notable graves and memorials within the cemetery. These include one for Yamamoto Otokichi (also known as John Matthew Ottoson) who is recognised as the first Japanese resident of Singapore, living here from the late 1840s up to his death in 1867. He played a crucial role in opening up relations between Japan and the west and, from reading more about him since, seems to have led a fascinating life. 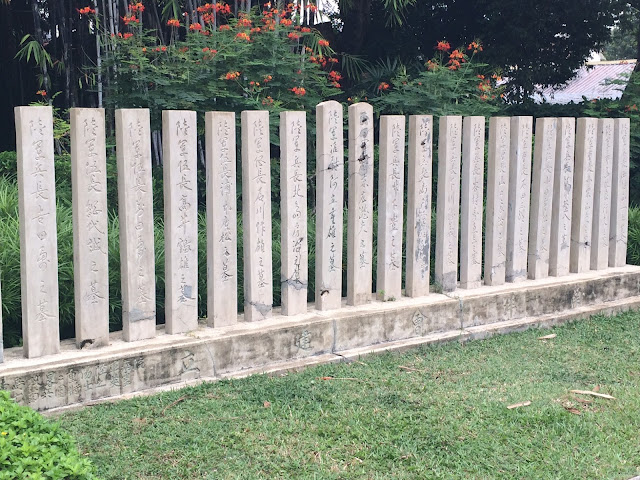 As I mentioned previously the walk from Kovan MRT to the cemetery park was very simple and takes you initially past a couple of condos and some shops and then through a number of quiet roads dotted with large houses. Although it's quite a twisty route through these residential streets it's easy enough to follow and in no time at all I was almost at my destination. The road that the cemetery park is on seems quiet and unassuming but the entrance is easy to find once you arrive. The park itself has a peacefulness that you'd expect from a cemetery and although surrounded by houses seems remote and distant from them once you enter inside. 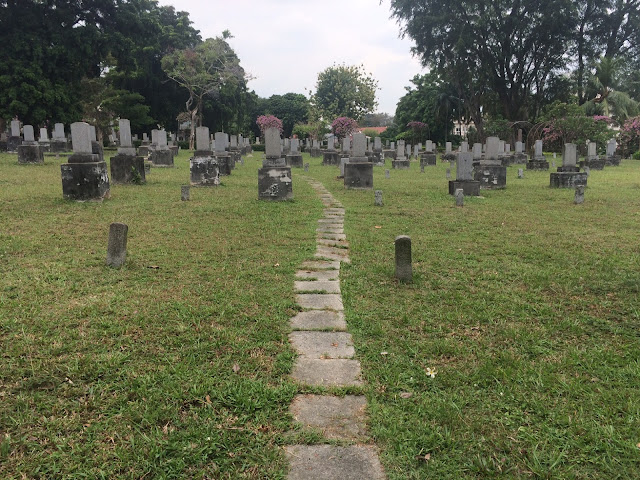 The cemetery park is the perfect size for a leisurely stroll and helpfully included close to the entrance are some information plaques about the history of the cemetery as well as a diagram highlighting the different areas of the cemetery, notable graves etc. Most of the graves are naturally inscribed with Japanese characters but a few (like the one in my photo above) have their inscription written in English. I also noticed a few graves with photos of the deceased on them. I remember seeing graves with photos like this in Bukit Brown cemetery and although I couldn't read the gravestone inscriptions there or here seeing their photos gave me a connection with the person who once lived and worked here too, albeit many years ago in a very different Singapore. 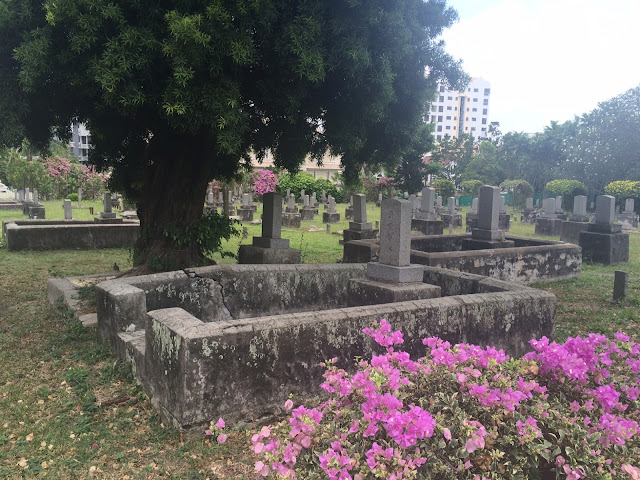 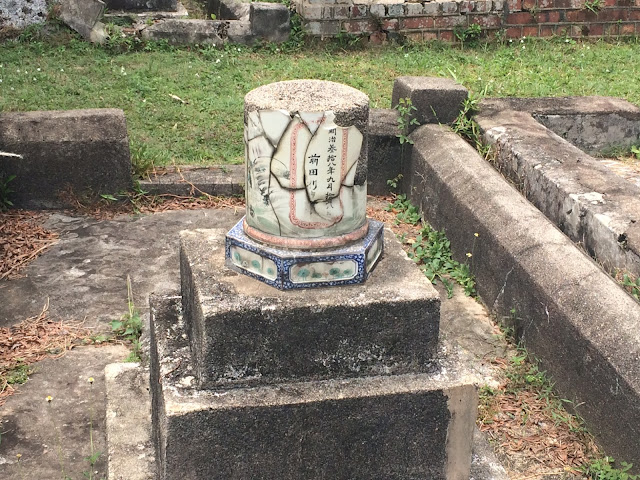 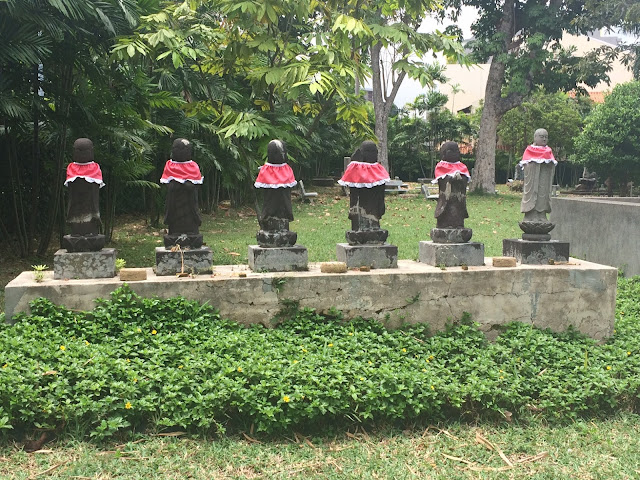 Tucked away down a residential street the cemetery seems almost forgotten by everyone, even those living on its doorstep. It gives an interesting insight into a part of Singapore's history and that of a particular community living here. It also touches in part on very difficult times in Singapore's history which are nonetheless very important. It's good to know that the graves here are safe from the threat of development and that those buried here can continue to rest in peace.

If you missed any of my previous Red Dot Roaming posts, check them out here and, of course, let me know if you think there's anywhere else I should be visiting!