During last year's festivities for SG50, Singapore's 50th anniversary of independence, a new walk route was laid especially to celebrate this. This follows an 8km route taking you through some of the history of Singapore right up to the modern day. We like walking and exploring so decided to give this route a go.

The walk begins at the National Museum of Singapore, somewhere well worth visiting too if you haven't been. Although there is the marker in the photo below outside the museum one thing I would say is that the start and end of the walk are not that obvious. Whilst the trail of SG50 markers to follow the route around are generally good, though we did lose them at one point and looking at the map afterwards it seems we also missed a part of the walk so maybe in hindsight they weren't so clear, the start and end could definitely be better marked. Regardless though we still had a good walk!

Back to the walk ... from leaving the National Museum of Singapore we headed towards Fort Canning Park and on past here towards the Peranakan museum and past the National Archives of Singapore. As we walked along Armenian Street I spotted this graffiti or street art on a wall, quite a rare sight in Singapore so it definitely caught my attention.

Then we walked on towards the Central Fire Station, Singapore's oldest operating fire station which also houses a heritage gallery. Along the route are several plaques with information about some of the places of interest you pass. I'm not altogether sure whether these were put in place for the jubilee walk or if they were already there. I suspect some of them were already there. The information was a bit limited though and it would be good if there could be a little more along the route.

As we approached the Singapore river I have since realized that this may have been where we missed part of the walk. It was around this point that a section of the footpath by the river was closed off for work so this may have been why or that the markers were not too clear at this point. Either way we followed markers that took us straight towards the Esplanade area and on to the Helix bridge rather than walking near the Padang and National Gallery etc. Regardless though the walk we took at that stage, that obviously didn't quite follow the set route, was still very pleasant.

As I mentioned we completely lost the markers near the Helix bridge, maybe in hindsight because we took a slightly wrong route. However we headed on over the bridge and managed to pick up markers again on the opposite side which we followed into Gardens by the Bay. 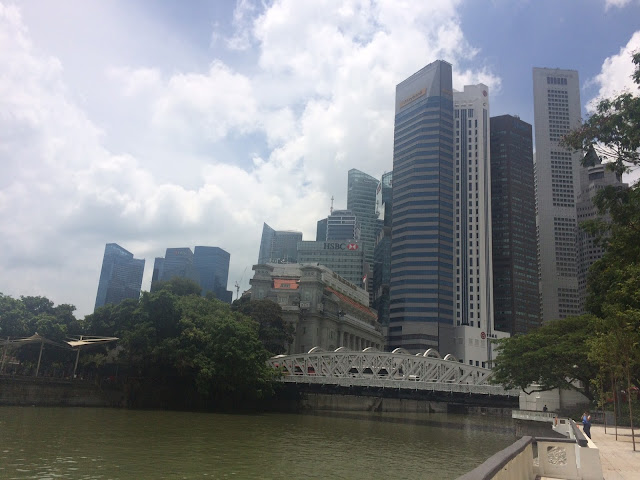 Once we were in the gardens we followed the route around towards the Marina Barrage, walking past the domes and also near where the family of otters live. I'm still waiting for the day I see them but I suspect it probably is not going to happen now! The walk ends at the Marina Barrage but, as I said previously, it wasn't terribly obvious. Regardless though of these minor issues (which in no way spoilt our walk) and despite us taking the incorrect route the walk is very pleasant and lets you see both the historical and the more modern sides of Singapore. It's worth doing if you enjoy walking.