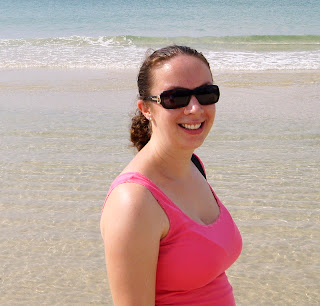 I moved to Singapore from the UK in July 2010, never having previously given any thought to moving and living abroad.  It was my boyfriend's job that brought us here and we subsequently got engaged and then married in October 2011 (back in the UK).

My husband actually moved here in January 2010 but we were renting a flat in the UK at the time and as the 'break out' clause of the lease was the June of that year we decided I'd remain behind until then.  This also gave me the chance to get my head around a move to the other side of the world, especially as this was not something we'd planned and discussed for months beforehand.  It just happened!  I initially took a six month career break from my job in the UK, but when it came to decision time about whether I quit my job completely or return to it I knew the right thing was to stay here.  It was hard to leave my job knowing I had nothing to replace it but I also knew I wanted to be with my fiance (as he was by that stage) and build our life and our future together wherever in the world that was.  I don't regret those decisions one little bit!    The good news is that despite being out of work for close to two years and, I admit, worrying at times that I was going to end up unemployable I finally managed to secure a part time job for myself in May 2012.  I'm more than happy it is only part time and even though it is I still have to plan a lot more now as to when I'm going to get things I need to do done.  More importantly though I've proved to myself I can get a job here and I'm sure the opportunity to work here will bring a lot of additional experiences and hopefully some fun too.

At the moment we are here for the foreseeable future, but I try not to take that for granted as so many people I've met here have already moved on.  We too nearly did the same in the summer of 2011, but another opportunity presented itself in Singapore allowing us to remain for now.  The UK will always be my home but for now at least I see Singapore as my home too.  By writing this blog I hope to share my experiences, both the good and the bad, during my time on my expat adventure here.

When I began writing this I never imagined I would receive much interest in it, other than perhaps a few family and friends in the UK keen to know what I was doing.  I'm not really sure how many people back home do read it, but through writing it I've met many fantastic people here, helped others (a little) in making the move to Singapore themselves and had wonderful opportunities as a result of it.  I thoroughly enjoy writing it and welcome any comments you may have on things you'd like to see here, things I can improve on, should stop doing and so on.

Away from blogging I'm a huge animal lover and we now have our lovely cat, George sharing our home too, enjoy reading practically anything, listening to pretty much any kind of music, show jumping, National Hunt horse racing, nights out, nights in, the supernatural and unexplained, eating and trying new food, exploring the region when we can and anything to do with history.

Thank you for reading my blog and I hope you'll return again.  If you are a regular reader and perhaps you occasionally comment on posts too - thank you!
Email Post