As I mentioned in my previous post we had a public holiday in Singapore recently for Vesak day.  This proved to be an ideal opportunity for us to visit somewhere new and we decided on the Changi Prison Museum.﻿

I was not able to take photos at the museum, but as I expected it proved to be an interesting and moving visit.  The prison was originally constructed in 1936 by the British as a civilian prison.  The prison subsequently became a Prisoner of War camp during the Japanese occupation of Singapore.  It is believed that the name Changi derived from the name of a tall tree prevalent in the area called the chengai but it is a name that is now synonymous with the World War Two camp.

The museum gives an insight to life in the camp and in Singapore at the time from a variety of first hand accounts including letters, photos, personal belongings and a number of paintings and sketches done by the prisoners.  It also details the experiences of those who were transferred out of Singapore as PoW's to go and work in various other labour camps including, amongst others, the Burma railway.

After the exhibition you walk into a part that looks like a recreation of the chapel built by the Allied PoW's in 1944 during their internment which became a place of solace and comfort to them.  There is also the chance to see replicas of the beautiful religious murals painted by a British PoW, Stanley Warren, during his incarceration.  They were only rediscovered several years after the end of the war at which point a search was undertaken to find the artist responsible for them.  Which, I'm glad to say, they managed to do.  There are replicas too of the Changi quilts on display.  These were quilts embroidered by the women prisoners who were encouraged to add their own personal touches to the part of the quilt they embroidered.  As there was only very limited contact between the male and female parts of the camp these personal touches to the embroidery were especially important.  When the blankets were eventually given to the military hospital at Changi it was a way of the men knowing whether their wives and loved ones were still alive.

Once you have finished in the exhibition there is a chapel where visitors can take time to reflect.  There are candles that can be lit and also many moving notes left by visitors who had relatives incarcerated here or who simply wish to express their sorrow.  Sadly the museum was moved from the actual site of the original PoW camp in 2001 to make way for an expansion to the modern prison but despite that it truly is a place for contemplation and reflection.

Although we do not live that far from Changi village and this far part of the island it is an area we haven't really visited previously.  So after our visit to the museum we thought a visit to the village would be a pleasant way to spend the afternoon.  As the guidebooks say it certainly does have much more of a village feel to it than anywhere else I've been to in Singapore but there wasn't as much there as I'd hoped there might be.  Just a hawker centre, a few other restaurants (which we were too early in the day for I think), a large hotel and a golf course.  I guess this is why it has a village feel and although pleasant I was hoping for a little more.

We ended up going to Changi ferry terminal where you can get boats to some of the outlying islands (we did not do that - hopefully another time) and from there following the Changi Point Coastal walk for a while.  After our visit to the museum this did seem to make a fitting end to the day as Changi beach was where thousands of Singaporean civilians were executed by the Japanese during the occupation.  Fittingly, as well, the sand that lit candles are placed in to at the chapel in the museum came from this beach to act as a reminder of the cruelties suffered. 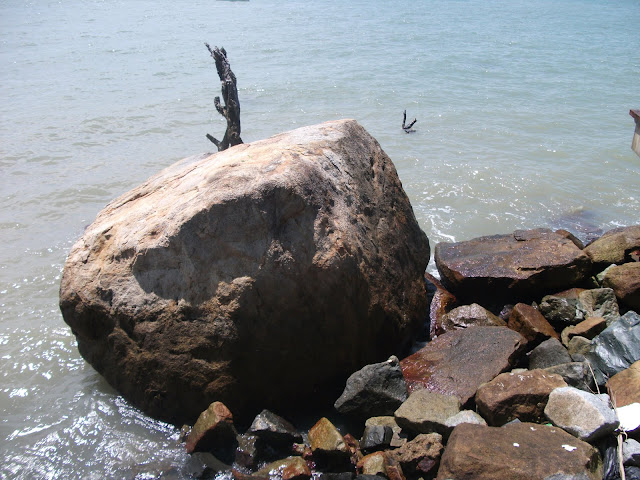 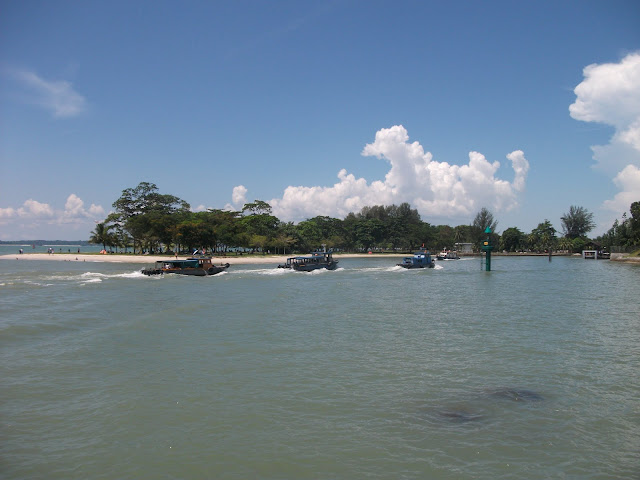 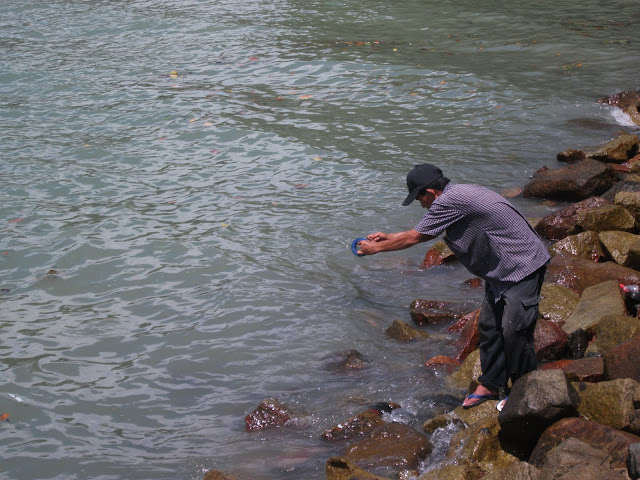