Unless you've been hiding under a stone in the remotest spot on earth I don't think it can have escaped your attention that last Friday was a very special day in the lives of Prince William and Kate Middleton - their wedding day!

Now as someone who is also getting married this year I was interested to see what Kate's dress would be like, what hymns they chose (actually they picked two the same as we have) and so on.  I am also a Royal fan and make no secret of that and think the UK would be a lot worse without them.  I adore watching all the pomp and ceremony of grand occasions such as this and being so far from home this was even more important to me.  I certainly think the Brits do a good job at it and not just when the world's eyes are on them as they were last Friday.  In many other events they do it just as well, changing of the guard at Buckingham Palace, the service of Remembrance each November, the Yeoman Warders at the Tower of London, trooping the colour, the Proms season and in particular the last night and many many more throughout the year.  For this reason I was very keen to be able to witness Friday's wedding.

I can't say Singapore was awash with bunting but fortunately for those who wanted to watch it, it was shown at several pubs and bars as well as the British Club and the Cricket Club and it was also available on TV here too.  So I was tuned into the TV for much of Friday afternoon watching all the build up. 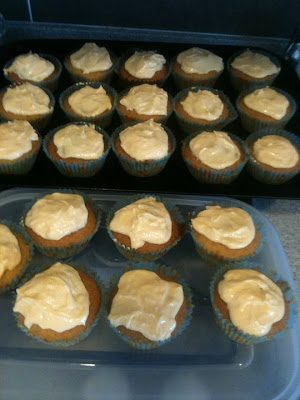 How did we spend the time when the wedding was actually on?  Well I baked the cakes in the photo (which for me was a big achievement as I do not remember the last time I baked) and we headed to friends for a Royal Wedding watch and a party afterwards.

Fortunately for us with the time difference the wedding was on in the late afternoon / early evening here so was a good excuse to crack open the bubbly and toast the happy couple.  After the wedding we then enjoyed the rest of the evening with delicious curry and meeting some new people.  Including a couple of fellow bloggers who, despite never having met them I instantly recognised and felt like I knew them already.  Despite a shower mid afternoon the weather perked up and we enjoyed it all in typical Singaporean temperatures too.

It was a lovely day, the bride looked radiant and I loved hers and her sister's dresses.  It was a day to be proud to be British and I certainly was.  All that is left is for me to wish William and Kate (or the Duke and Duchess of Cambridge) a long and very happy marriage!
Email Post
Labels: day to day life drinking festivals and events food local food and drink me photos royalty Singapore UK wedding