Korean food is not something that I think I'd ever tried until the other evening when we went to a Korean BBQ restaurant called Seoul in Chijmes.  Chijmes was originally a Catholic convent called the Convent of the Holy Infant Jesus and it was from these initials that the name Chijmes was partially formulated.  It was used as a convent for 131 years before being converted, whilst retaining many of the features of the convent, and now hosts many bars, restaurants and shops.  The complex was preserved as a national monument in 1990 and  I think it is one of the nicest conversions of a place from one use to another that I've seen in Singapore.  Once you are inside the complex it is easy to forget how central you actually are.  Especially when you are dining in the restaurants on the upper level and enjoying a warm Singapore evening and good company.

Before we went to the restaurant I knew that Kimchi (fermented vegetables) was a very popular Korean dish but other than that I knew very little else.  I actually thought kimchi was always made out of cabbage but I've since discovered it can be made from several other vegetables too including onions and cucumbers.  Kimchi is the most popular side dish in Korean cuisine and we definitely had plenty of it the other evening as well as soup dishes and noodles.  A lot of the kimchi side dishes were fairly hot and flavoured with chilli's but were all very pleasant.  The photos below show some of the side dishes we enjoyed.

Obviously as it was a BBQ we did have some meat with our meal as well (beef and pork) but I did not get any photos of this.  Mainly because we had a waitress cooking our meat for us and by the time she'd finished we had pretty much eaten all the meat.  I understand that in most Korean BBQ restaurants in Korea the diners will cook the meat themselves, but we were not given this option.  Perhaps because it was a charcoal grill built into the table and we may possibly have got carried away......  Fortunately I've been able to experience this in other restaurants here, when we enjoyed Japanese steamboat for example, and also when we went to the Hot Stones restaurant on Clarke Quay where you cook your own choice of meat on, as the name suggests, a hot stone.

It was a fun evening, the food was all delicious and I'd definitely return for more. 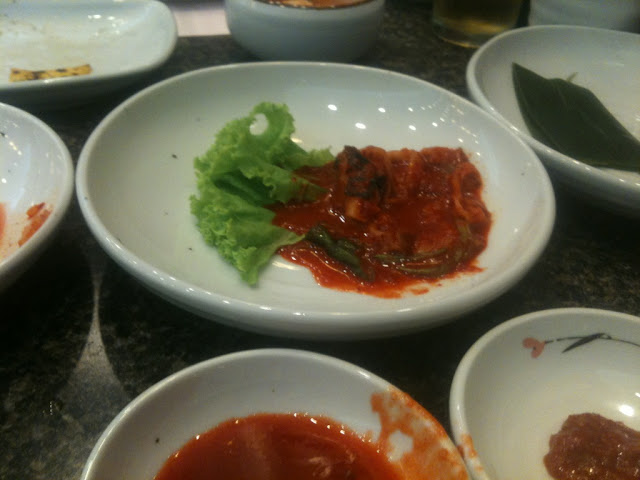 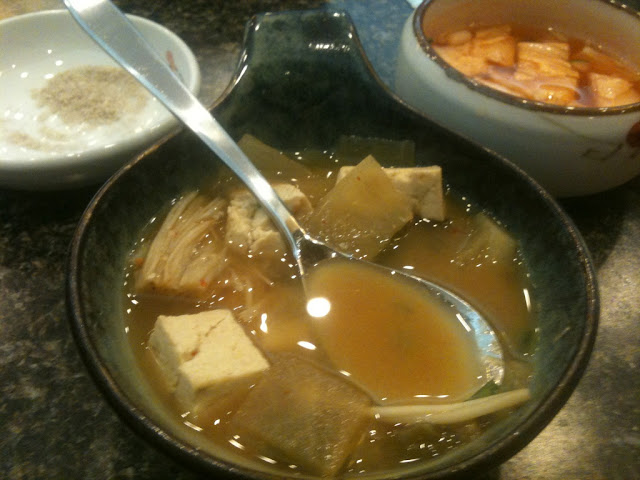 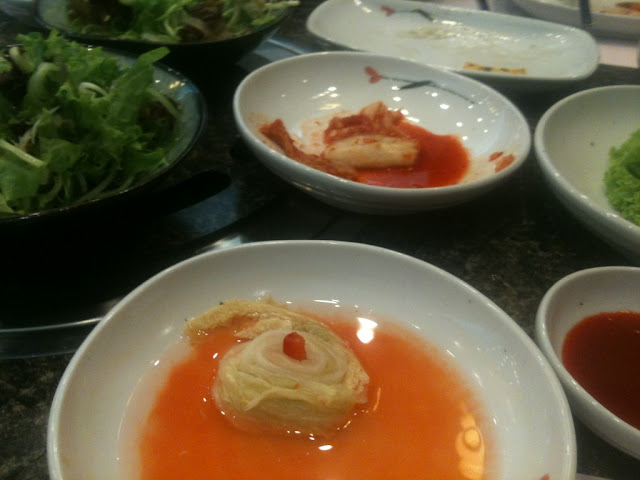