Quite by chance I've recently been to two restaurants which share an unusual common theme, they are both named after children's fairy tale and nursery rhyme characters.  The first one being Bar Bar Black Sheep and the second Big Bad Wolf.  There is no link between the two places other than that they share original names and are both places I would suggest to others to visit.

Bar Bar Black Sheep was recommended to me sometime ago but it was only with the news that another one of this chain is shortly due to open in Boat Quay that we finally got around to visiting.  There are already a couple of this chain of bars/restaurants on the island and we chose to go to the one on Robertson Quay.  This quay generally seems a little more relaxed than the party quay that is Clarke Quay or Boat Quay which is very much the place to go for drinks and food during the week after work (especially if you work close by).  We often end up on Robertson Quay on a Sunday for brunch at another place called Boomarang just because this quay has a nice Sunday relaxed vibe to it.

The bar/restaurant serves Thai, Indian and Western food, we opted for Thai and shared a few dishes, all of which were very good.  I'm not sure about the other menus available but I did notice above the Thai food counter, at least, there was a sign indicating that they had begun life as a hawker stall and prided themselves on the quality of the food served.  At the Robertson Quay branch you can choose to sit inside or out, the outside tables overlooking the Singapore river.  We picked an outside table and enjoyed a relaxed evening at a place with a nice ambiance and good food.

Last week we then went to another restaurant/bar called Big Bad Wolf, this place is very close to us on Tanjong Katong Road and although we'd eyed it up a few times we'd never actually been.  It was well worth the visit, the decor is quirky and in keeping with the theme of the big bad wolf and Little Red Riding Hood story the walls have trees painted on them and all the seats have a wolf design on them.  The menu consists of burgers and a few other traditional dishes such as bangers and mash.  I picked cottage pie, it was really good and came in a bowl with a ceramic pig on the side (perhaps another fairy tale / nursery rhyme theme as the lady near me had a sheep on hers).

Something which is a bit of a rarity is that we then decided to have desserts, I had ice cream with chocolate sauce which was delicious but my fiance had a Baileys infused chocolate tart as the photo below shows.  It was a very alcoholic tart (definitely not one for the children) however I thought the best part of this dessert was the fabulous wolf silhouette in cocoa on the plate.  Definitely attention to detail.  The service here was great too something that always makes me want to return to a place.  Asides from the eating area there was also an area that you could sit if you just wanted to enjoy a drink.  I think this is somewhere we'll be returning to before long. 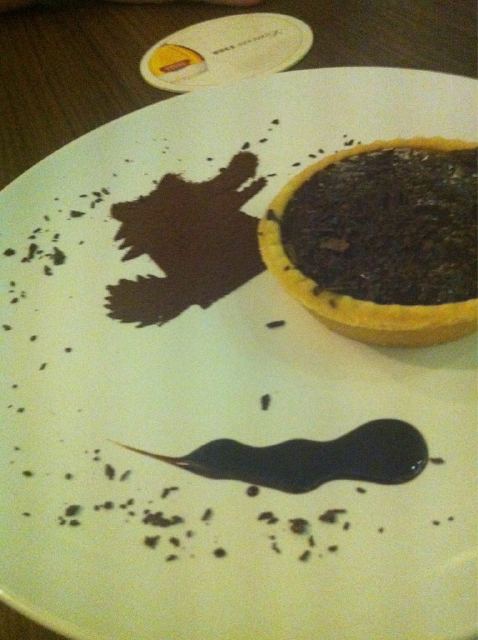 Sadly since writing this Big Bad Wolf has now closed down.  A real shame, in my opinion, as it was a great local place to go for a couple of drinks and some food.

There is, however, now a Bar Bar Black Sheep on Tanjong Katong Road as well as the one mentioned above, serving good Thai and Indian food.