I was recently fortunate to be invited to go on a Makansutra Food Safari and following on from that I received an invitation to attend a Makansutra cookery masterclass with KF Seetoh - how could I say no to that??  Apart from a little trepidation given my complete lack of culinary skills I did not hesitate in saying yes!

Our cooking class was held at Tools of The Trade or ToTT as I've discovered it is also known as.  This was a place I'd actually heard about (thank goodness) via Twitter from fellow Tweeters who are no doubt far more at home in the kitchen than I am.  Having now visited I can appreciate what a draw this place is to cooks and those who love pottering in the kitchen.  So if you are a fan of cooking, baking and hosting, are in Singapore and have not yet found this place I recommend you go and take a peek sometime.

Anyway back to our masterclass, when I arrived I was given a booklet with details of the three dishes we would be making, these were, Rojak, Hainanese Pork Chops and Bubur Cha Cha Ice Cream.  Quickly glancing at the dishes I was glad to see they all were things I'd happily eat, somehow I imagine it harder to cook something that you personally would not want to eat and that they all seemed fairly straightforward.

As it was a class led by KF Seetoh he filled us in a bit on the history of these dishes and then demonstrated each dish in turn before letting us loose on them.  Thankfully I was not the only novice cook there and he is an incredibly relaxed, fun individual so I figured that if I made some terrible error I would not get a Gordon Ramsay style roasting for it!  As we were making three dishes in only a couple of hours we did have some help in terms of pre-chopped and prepared vegetables etc. and some very helpful people tidying up after us.  If only cooking in real life (or at least my life) was so organised! 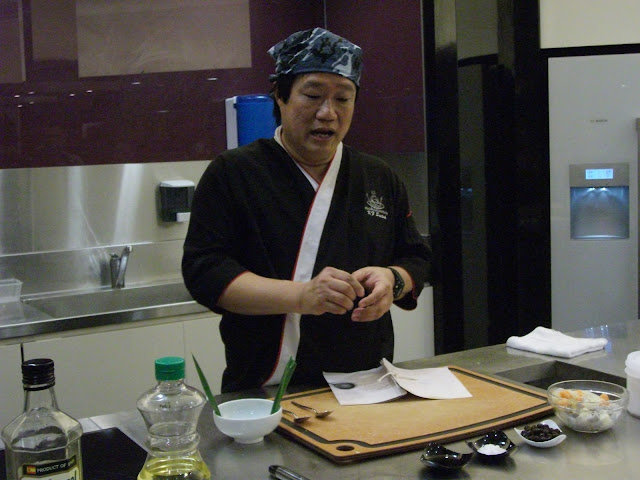 We began with the Rojak, something I'd heard of but to be honest was not exactly sure what it was.  I've now discovered it is a fruit and vegetable salad and is common not only here in Singapore but also in Malaysia and Indonesia.  Rojak actually means 'a mixture of' in Malay and traditionally the ingredients include bean sprouts, turnip, cucumber and  pineapple.  It seems like anything goes though!  The salad is served in a spicy dressing (and it definitely had a kick to it) made of prawn paste, tamarind, sugar, lime and sambal chili.

The verdict on this dish was that I'd missed out by not trying it before.  At least now I know what it is so I can order it again.  Luckily we were given little 'doggy bags' to take our dishes home and I finished eating the salad the next day.  I personally think that was a mistake though as by that stage some of the ingredients had gone a bit soggy.  In hindsight a dish that needs to be eaten when it is freshly made.

Then we moved on to the Hainanese pork chop.  I was probably a little more daunted by the thought of cooking this one than either of the other dishes just because of the preparation involved, despite us having some help as I mentioned before.  I think though I was just letting my tendency to convince myself I can't cook and there is no hope for me take over and I was thankfully pleasantly surprised by the end result.

As for a bit of history about the dish, the Hainanese were one of the last dialect groups to migrate to Singapore in the late 1800s.  By that time most of the jobs available had been monopolised by the other dialect groups and therefore many of the Hainanese ended up working as cooks in the British homes.  As a result they learnt to cook western style dishes as well.  You still see in Hawker centres a lot of what you may think of as western food but with a quirky twist based on the ingredients that are more readily available.

Personally I'm not sure you'd want to eat this dish too often though.  It was delicious but given that the pork chop is deep fried (in more oil than I've ever cooked with in my life) I don't know that it is the most healthy option.  Isn't it always the way that the best tasting food is not necessarily the best for you!  The chop was served with potato wedges and smothered in a tangy tomato based sauce which contained of all things Worcestershire sauce!  Fantastically yummy though and a dish I've promised to attempt for my husband soon.

Our final dish of the evening was Bubur Cha Cha Ice Cream.  Given that we only had limited time to make all this food our version was slightly adapted from the traditional and we did not make the ice cream ourselves.  We were shown how to decorate the ice cream to our taste and of course with this dish we had to then eat it straight away before it melted!

The dish, which is traditionally prepared during the festive seasons is a Peranakan dessert made with sweet potato, yam and tapioca pearls.  It is sweetened with Gula Melaka (palm sugar), this is incredibly sweet but tastes divine, it reminded me a little of golden syrup.  I could have happily eaten it by the bucket load!

I was a little uncertain if I'd like this as I've had yam in a dessert before and it was not something I enjoyed.  Despite my reservations though I actually quite liked it and the Gula Melaka certainly helped it to go down.


Our evening ended and we headed off home with our 'doggy bags' of rojak and Hainanese pork chop.  I thoroughly enjoyed myself and came away quite inspired to have a go at these dishes again.  If they don't turn out exactly as I expect at least I can always go to the local hawker centre instead!

Thank you to notatourist.sg, GOODSTUPH, SingTel and, of course, Makansutra for a wonderful evening.