This cafe is now closed.

Kopi Luwak (or civet coffee) is something I was unaware of until arriving in Singapore.  I like coffee but I guess I'm not really a connoisseur of all things coffee related.  Upon hearing about it though and subsequently discovering that the production of the coffee is fairly unique my curiosity was peaked to see if perhaps I could find an opportunity to try it at some point.

Just in case you do not know kopi luwak is made from coffee beans that have been eaten and partially digested by the Asian Palm Civet.  These civet's are cat like animals native to South and South East Asia, they can even be found in Singapore.  They are omnivores eating a variety of berries (and the coffee beans) as well as small mammals and insects.

Back to the coffee though and as I mentioned the civets eat the coffee beans which is the start of the kopi luwak production process.  Whilst in the civet's stomach various enzymes seep into the beans and chemical changes occur to the partially digested bean.  After they are passed by the civet the beans are collected from the animal's faeces and once gathered are thoroughly washed, sun dried then lightly roasted and brewed to make what is currently one of the most expensive coffees in the world (hence my husband and I deciding to share a cup).

The origins of the coffee are linked to the history of coffee production in Indonesia.  When the Dutch established plantations in their colonies the native farmers and plantation workers were prohibited from picking the coffee fruit for their own use.  The locals wanted to sample some of the coffee though and upon realising that the civets ate the fruit but did not completely digest the beans they began collecting the beans to make their own coffee.  The fame of this coffee quickly spread from the locals to the Dutch plantation owners and it soon became popular with them too.  Even in colonial times though the coffee was expensive due to the rarity and unusual process used in its production.

On our Bali trip we did not get the opportunity to sample it though and it was only after reading this post by Singapore Actually that I realised it was possible to try the coffee here.  Naturally this meant a trip to this cafe, located in 313@Somerset, was in order at some point.

When the coffee arrived it was poured into a pretty cup and saucer (the type my Grandma used to own) from a small coffee pot.  It is obviously brewed to order and just the right amount for a cup is made I guess.  Taste wise it was a little bitter, but this was as I expected as it is served black but it was not unpleasant and between us we drank the cup.  To be honest at the price of it we could not afford not to finish it. 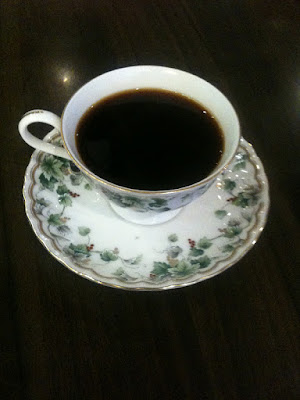 My husband has actually had it again since whilst on a recent business trip to Jakarta.  This time it was served in a cup and tray with a civet design on and in a coffee pot that looked more like, as he said, something out of a science experiment.  He commented that it was pretty strong but not as bitter as what we had sampled here in Singapore.  Is it better in Indonesia I wonder??  I'm glad I've sampled it though and would happily do so again, perhaps next time somewhere in Indonesia. 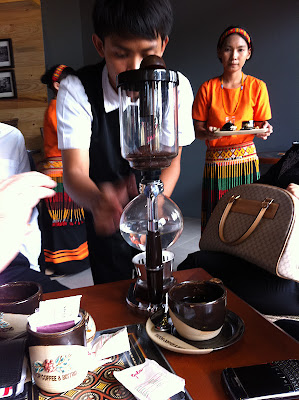