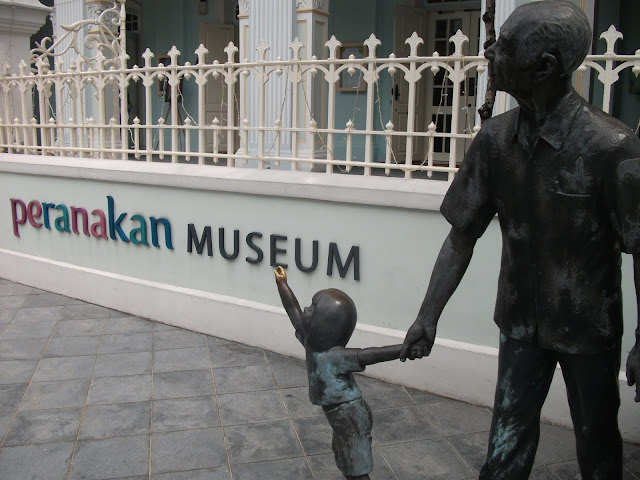 I've visited the Peranakan museum previously but made a return to visit a specific exhibition about the Sarong Kebaya.  The Sarong Kebaya was the chosen clothing of the Peranakan women (nyonya's) for many generations.  If you are not sure what this style of clothing looks like have a look at the uniform of the air stewards on Singapore Airlines, their uniforms were inspired by this clothing.

The exhibition traces its history by looking at the Middle Eastern, Indian, Chinese and European influences and how the styles, materials and decorations used altered accordingly between the 16th and 20th centuries.  It is a staggering collection of original pieces (many on loan) all exquisitely and painstakingly designed and made.  The colours and designs are beautiful and the exhibition shows how the clothing developed from a very basic functional piece to carefully designed high fashion pieces of their day and culture.  Where wearing your best pieces was very much a part of demonstrating to others your standing and position as well as the overall elegance of the nyonya's.

As I wandered around the exhibition I was struck by how many of the designs could still be considered very wearable.  Many of the later designs, in particular, would not look out of place for sale in a high street store.  They really were stunning and the designs on many of them unique and with much symbolic meaning to them.

The exhibition is on now and runs until the 26 February 2012.  I gather that around October time they'll be replacing many of the current sarong kebaya's on display with new ones (possibly worth a further visit).  The museum is on Armenian Street and is open on Mondays from 1pm to 7pm and Tuesdays to Sundays from 9am to 7pm (9pm on Fridays).  As well as this exhibition there is a whole range of exhibits about Peranakan culture at the museum.  It is well worth a visit if you are interested in finding out more about the Peranakan communities of South East Asia.
Email Post
Labels: exhibitions history museums Peranakan Peranakan museum photos places to visit Singapore things to see
Location: Armenian St, Singapore