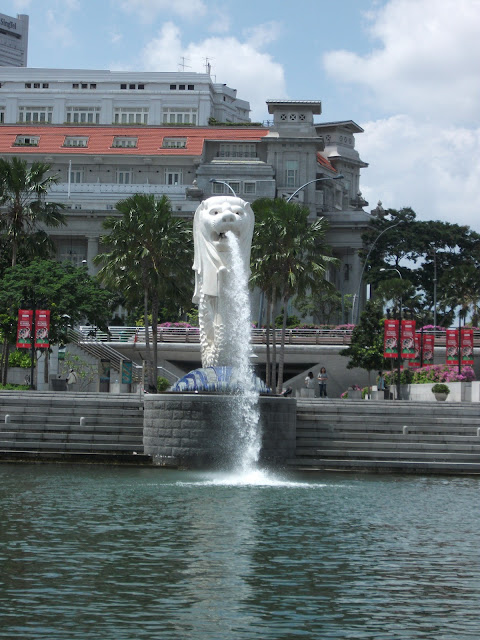 I've fallen a little behind in my postings lately for a very good reason.  We've had two visitors staying with us since the beginning of July (my fiance's two sons, my stepsons) and so we've been taking them to various places on the island.

One of the first things they wanted to see was the Merlion.  I realised this was one of the tourist things I did when I came here on a pre move holiday but I've never really mentioned or acknowledged it on this blog as a result.  I wrote about what I consider to be another icon of Singapore (Raffles Hotel) a while ago and I think the merlion can also be classed in the same category.  It is one of the things that most people (even those who haven't been to Singapore) will be aware of and will recognise.

It is a mythical creature with the head of a lion and the body and tail of a fish.  The fish body is said to represent Singapore from the time it was a fishing village known as Temasek.  Temasek means sea town in Javanese.  The lion head represents Singapore's original name, Singapura which means Lion City.  I've mentioned this before but when an ancient prince landed on Temasek he believed he saw a lion on the shore and named the place Singapura.  As there have never been lions in Singapore it is more probable that he saw a tiger but still the name stuck and the island was renamed Singapore.  The merlion symbol was designed in the 1960's so despite it being instantly recognisable as a symbol of Singapore it is not as old as you may first think.

Although the one in my photo above is probably the one you are most likely to have seen in photos of Singapore, this is the one near the Fullerton Hotel at the mouth of the Singapore river.  There are a number of merlion statues dotted around the island including one on the island of Sentosa.  This one is big enough to go up in and has a viewing platform, personally I think this one looks a little scary.  I haven't been up on to the viewing platform so I don't know how good the view is.  There is a smaller merlion behind the one in my photo above (which also spouts water) and another at Mount Faber amongst others on the island.

Whilst thinking about this post I had a bit of a look on the Internet for merlion references and did stumble across one thing that amused me.  According to Wikipedia, so please correct me if this is wrong, Singaporeans often use the term 'merlion' in place of vomiting, due to the merlion's constant gush of water from its mouth!  It is, apparently, now used by Singaporean medical staff as a slang term for a patient suffering with this condition - lovely!

Earlier this year the merlion found a different kind of fame as a temporary 5 star hotel suite.  For a month from April to May the merlion was obscured from view as it became the centre feature in this one luxury room.  To the casual observer it could almost have looked as if the merlion were undergoing some form of maintenance work.  It was however part of the Singapore biennale 2011 organised by the Singapore Art Museum and was a piece of art by Japanese artist Tatzu Nishi.  I should clarify that for the duration of this the water gushing from the merlion's mouth was temporarily turned off!  You can read a little more about this here.  The merlion is now back to how it looks in the photo above with water gushing from its mouth.

The merlion really is an iconic Singaporean mascot, countless souvenirs can be found either of merlions or with the merlion featuring on them.  There are bars with cocktails served in merlion shaped containers and in merlion shaped glass holders.  At the Youth Olympics last year one of the mascots was a character called Merly who was based on the merlion.  The list is endless.  You would certainly find it difficult to avoid the merlion, or at least something linked to it, on a visit.