Krish - a plush venue for a quiz night

Update 22 March 2013
Another update I should have done a while ago but Krish is yet another restaurant in Singapore no longer in existence.  However in the same place is Nosh the new restaurant concept by the owners of Krish.  I haven't been yet but please get in touch and let me know what you think.
This is a bar / restaurant in the west of the island in a complex known as Rochester Park.  It was described to me recently as similar to Dempsey and I have to agree with this.  There are colonial style buildings and that same feeling of tropical lushness with the place full of restaurants and bars to while away your free time.﻿

We actually came here for a pub quiz and I have to say this must be the poshest and most pleasant bar I've ever gone to for a quiz.  The quiz takes place every Wednesday evening, it is best to call and reserve a table in advance and teams have a maximum limit of eight people.  The quiz was, as expected, fun though the questions were very hard, that said though we still managed to win. 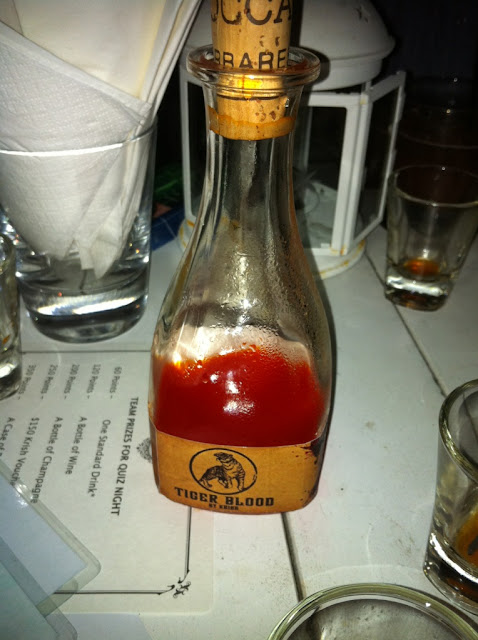 The quiz night was actually being relaunched the evening we attended and so during the course of the quiz there were a few additional perks that we benefited from.  Firstly we were given two free cocktails from a selection on the menu.  There was a free shot based drink given to every table.  The drink was called 'Tiger Blood' and as you can see from the photo was bright red.  I'm not sure what was in the drink but mint definitely was.  Asides from the drinks we were also given several plates of snack food to share throughout the evening too.  Although we did not eat in the restaurant area, the bar food alone was very good with plenty of selection.

Whilst I believe all of the freebies were just a perk for the relaunch the quiz is free to enter and if you like quizzes was a lot of fun.  The ambiance and environment though with plenty of tropical lush greenery, make it worth a visit at anytime.
Email Post
Labels: drinking food nightlife photos places to visit restaurant Rochester Park Singapore
Location: Rochester Park, Singapore