As these posts seem so popular with my readers (and it's Friday so a few beverages after a long week are most definitely in order) my fiance has again been busy writing about various bars in Singapore that are worth a visit.  His latest best five bars are detailed below.  If you are on Instagram and you like what you read follow him at @nomadiclancashirelad.

On Beach Road, is the absolute colonial bar with dark wood, ceiling fans (motorised in this day and age, although I imagine at one point there must have been a poor unfortunate urchin sat in the corner pulling a cord in order to keep the establishment cool and comfortable), slickly dressed barmen and bar women and easy chairs.  It is located on the first floor at the back of the hotel, above a courtyard bar.  It is, of course, the home of the Singapore Sling (designed as a drink for the ladies sometime before 1915 by Ngiam Tong Boon and now every tourists drink of choice, it would certainly be one for Del Boy, mange tout mange tout).  As previously mentioned there are two bars in Singapore where littering is permitted (with monkey nut shells) and the Long Bar is one of them (no prizes for knowing the other one, I have written about it before), it being common to throw the shells or whole nuts on the floor for fun.  Usually I prefer to sit at the bar, as opposed to one of the many tables (which I feel are rather too closely packed together) and people-watch (a fun pastime with so many tourists around) with a Tiger pint (flipping expensive here at $18++, added service and Goods and Service Tax, GST). When I first arrived in this was the haunt of choice, on a Sunday afternoon, as one could usually guarantee a conversation with a Brit, Aussie or Yank (Westerner chat, often craved by the fresh off the boat expat). 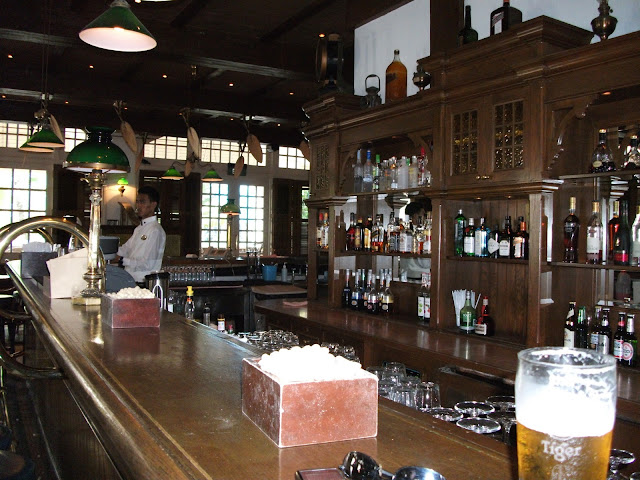 At the Swissotel, above Raffles City Mall, is a high rise bar with spectacular views across (including all the ships at anchor in the bay awaiting to load or unload) to and .  The best time to go is just prior to sunset, although it is often difficult to get a window-side table (incidentally the windows are the floor to ceiling variety so if you suffer from vertigo do not stand too close to them, else you may feel a little dizzy).  The drinks menu is very very extensive, extending over several pages of a very swish booklet, covering every conceivable cocktail under the sun (or sunset), a range of beers and good wines (it really is excellent supping champagne to celebrate a birthday as the sun slips gracefully beneath the horizon in the west). One such cocktail is served in a white porcelain merlion (I need one of these containers), although I do not profess to know what drink it contains.  On the beer front you can order a larger ale served in a half yard glass (on a wooden stand, similar in style to Kwak glass served in Oosters, Far East Square) with the challenge being to drink it without covering one self in beer as you get to the large bulb at the bottom of the glass.  Later in the night the bar turns in to a kind of dance club with many ‘big fish, little fish’ tunes (although not as hardcore as Stereolab or Zouk).

Scruffy Murphy's
Update 13 January 2013 - I'm a little late with this one but Scruffy Murphy's is no more. Sadly it closed last year.  Their website does indicate that they'll be back and to follow their Facebook page for updates.  So watch that space I guess and fingers crossed!

Within , is a great place for a Sunday afternoon chill out and brunch by the sea.  It is a fairly typical Singaporean Irish bar (operated by the Gaelic Inns chain, with other branches being The Penny Black on Boat Quay and Muddy Murphy's at Orchard Towers), serving food that generally hails from the emerald isle (or at least from the British Isles) and the standard range of beers (Tiger, Guinness, Bodies) and wines.  The food in general is good, a bit basic but does what it says on the menu.  Particularly excellent is the all day fry up consisting of the usual suspects, served on an enormous plate with toast etc.  One word of warning, if you order the fish and chips check that you get chips and not mash, really who the feck (Irish phrase there) orders deep fried fish with mash potato, apologies if you are that weirdo.  Anyway, it is a fab place to relax at the weekend with the sound of the waves in the background, the sights of people attempting to Rollerblade and girls on the backs of tandem bicycles not peddling whilst their boyfriends do all the work (top marks for loafing).  Finally the bar is ideally located, if you have been energetic and hired a bike (about $15 for three hours) and cycled up and down the East Coast Park (one can cycle to Changi Village, past the airport), for restorative pint before having a sleep.

On Boat Quay, is the second branch of the popular backpacker pub based on Dunlop Street in Little India.  The Boat Quay version is in an old narrow shophouse overlooking the river (there is also a terrace with seats next to the river).  The bar inside is made up of a solid slab of wood that looks as if it was cut out of one of the East India Company’s clippers and buffed up, giving the place a look of an oldie world back street boozer (in fact the first time I frequented the joint it was inhabited by a couple of old Navy boys telling tales of drunkenness on the high seas, that sort of place).  Drinks-wise the offerings are fairly standard, although the beer options are excellent, coming from small regional Aussie brewers (and a good range of bottled beers, anywhere that serves my old friend James Boags is worth a mention).  For food to compliment the drinking there is a Mexican franchise, serving , err Mexican food  (tacos, fajitas, enchiladas etc. with beef, fish or chicken) in huge tasty sumptuous quantities (a lunch time stop here and the afternoon may require a siesta), including wonderful apple based desserts.  My first evening trip to the bar we encountered a Mexican festival celebrating a victorious battle (led by a bunch of farmers) with French (always a reason for an Englishman to celebrate French defeats) that included a piñata filled with sweets and money off tokens (free food and beer) – a lot of fun was had by all with a few sore heads I imagine.

They have two branches in (the Red Dot on the South East Asian map), located on Boat Quay and on Dempsey Hill.  As a micro-brewery the beer served is generally excellent and extends across a wide range of styles.  There is an excellent style kolsch (I enjoyed this on a trip to the city’s Christmas Markets in 2009 and also on ’s Southbank), as well as a light English-style summer ale and a darker maltier stout.  The most unusual beer is the appropriately named Monster Green (I am sure this was also a character in one of my kids’ story books) which is unsurprisingly green in colour (a herb with health bringing qualities has been added).  I will say that it takes a leap of faith to drink but once sampled there is no going back. Given the green nature of the beer, the bars ran out on St Patrick’s Day this year.  Of the two bars, I have frequented the Boat Quay branch more regularly (in fact I am probably considered a local by the usually brilliant staff).  It is situated nearer the Raffles Place end of the quay and is again in an old shophouse (or more accurately several old shophouses) and also has a terrace onto the Singapore River (one can often observe fish nibbling at the quay stones below one’s drinking perch).  The food at Red Dot is good, ranging from bar snacks (chicken wings, wedges etc) to more substantial meals.  The Dempsey branch is based in the lush rainforests of the former British Army barracks and is where the actual beer is brewed (more Monster Green is needed for next March, guys).  The branch also includes a kids cookery school on a Sunday which will be sampled soon (Laura will report upon that escapade in a future blog). 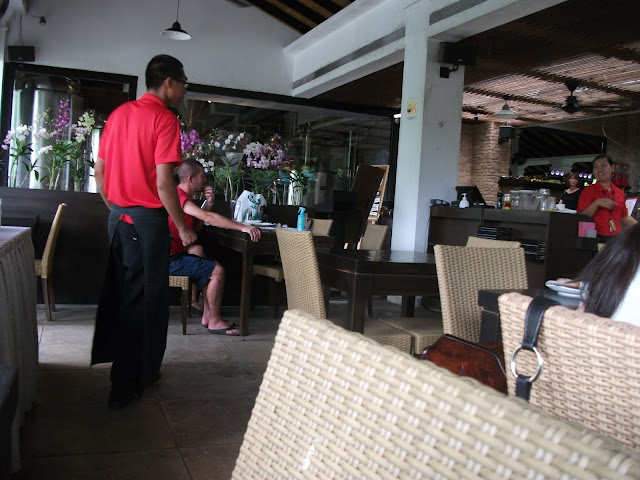 You can read the previous two posts about some of the best bars in Singapore here and here.