I met up with a friend in Chinatown to visit the Chinatown Heritage Centre recently, a place I've visited previously and really enjoyed but she had not been to.  After our visit and some lunch we decided to have a look at a couple of the temples that were close by as well.

Firstly we visited the Sri Mariamman Hindu temple on South Bridge Road.  Being in the heart of Chinatown this temple seems even more striking in comparison to the other buildings around.  Having different religious temples in close proximity of each other is not that unusual here and is frequently seen, an example of how the differing cultures in Singapore have harmonised?

The temple is Singapore's oldest Hindu temple built originally in 1827 by Nariana Pillay.  He arrived in Singapore on the same ship as Sir Stamford Raffles.  The present form of the temple dates from 1843. 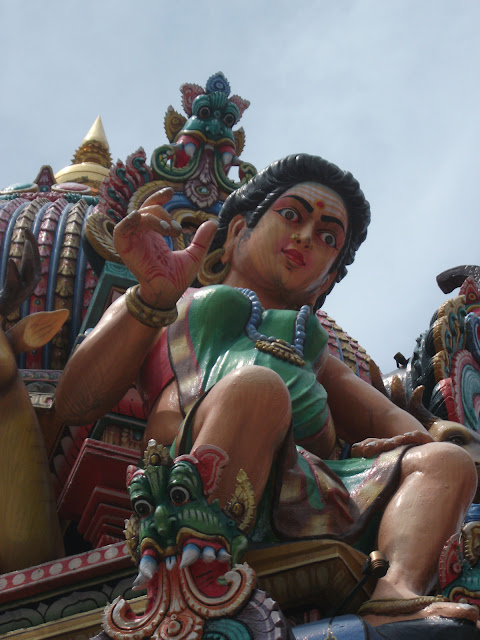 We were the only ones in the temple when we visited and once inside the compound it is beautifully serene and peaceful.  There are wonderfully painted ceilings (as you can see in the photo below) with numerous deities portrayed.  Before you even enter the temple you can't miss the colourful gopuram (tower of the temple) which is intricately decorated and the cows etc. that adorn the tops of the walls skirting the grounds.  Once you are inside there are several shrines all equally beautifully decorated and highly coloured.  It, like all the Hindu temples I've seen since arriving here, is a real treat for the eyes. 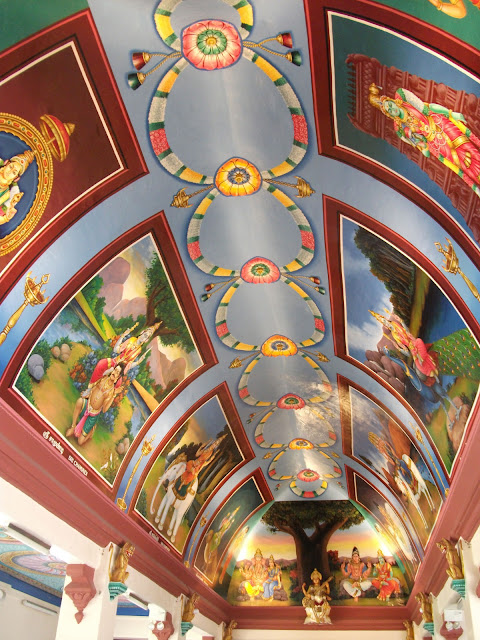 We then ventured a little further up the road to the Buddha Tooth Relic Buddhist temple which is again on South Bridge Road.  This temple was only opened in 2008 and is a huge five storey building built in the southern Chinese Buddhist style.  The temple houses what is believed to be the sacred tooth of the Buddha, hence the name.

As soon as we arrived I was welcomed by the exotic smell of incense sticks being lit and burnt by the worshippers.  Once we got inside we were immediately in the area where the services take place.  There were a lot of people offering up prayers and as we walked around the edge we noticed that quite a few Buddhist monks had also appeared.  It was only then that we realised a service was about to begin.  At first we were not sure if we would need to leave but this proved not to be the case and it was fine for us to remain and observe.  Even down to us being able to take photos of what was happening. 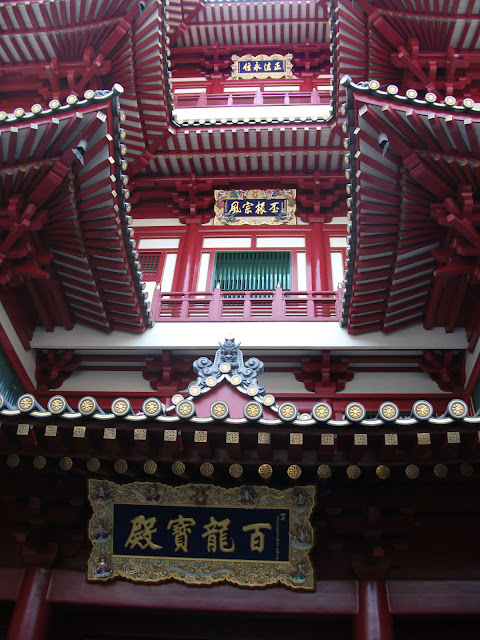 The temple is beautiful with a large golden Buddha at the front flanked by numerous smaller statues.  There are hundreds of tiny Buddha's set in to the sumptuously designed walls, together with good luck deities around the sides of the temple.  These deities are all different and are for each of the Chinese new year's depending on the one you were born in. 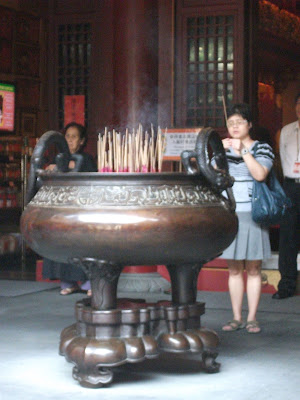 The chanting of the monks must take many years of practice, it is quick and continuous and they appear to barely stop for breath.  The congregation also join in and as I listened to them it seemed to me very soothing and slightly hypnotic.  As we wandered around the lower level we also found a smaller group of monks again chanting to the accompaniment of music at the same time as the service continued in the main part of the temple.

The next level up is a mezzanine level and serves as an observation deck to the lower level.  Here you can watch the proceedings (between the blinds) below without feeling that you are intruding too much.  It also gives an idea from above of the sheer scale of the Buddha in the temple and the size of the building as well. 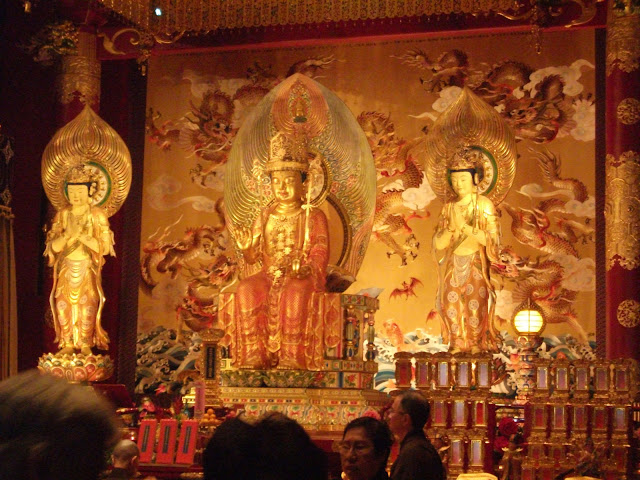 The levels above that house a museum about Buddhism, which is well worth a visit if you are interested in finding out more.  A gallery of prominent monks both from the temple and Singapore and their achievements, some information about the building of the temple and a gift and book shop.

On the highest level is the Buddha tooth relic.  This room was just as beautifully decorated as the lowest level had been.  The stupa (or place where the relics are housed) is made of gold that has been donated by worshippers and the floor is covered in tiles of gold as well.  The relic and this part of the floor was not accessible and had to be viewed through a window but it was stunning to look at.

Finally, as if all that was not enough, the temple has a roof garden.  The garden was lush with plants, shrubs and flowers everywhere.  It really would not have looked out of place in the Botanic Gardens.  Right in the centre of the garden is a huge Vairocana Buddha prayer wheel.  I was amazed by how big it was and together with the peacefulness of the garden this must be the perfect place to pray and gather your thoughts.

All the temples in Singapore (and not just the couple I've focused on here) are definitely worth a visit.  I've always found you are made to feel incredibly welcome when you do take the time to explore.  Ultimately visiting them gives you the opportunity to learn about another aspect of the day to day life of many living here first hand. 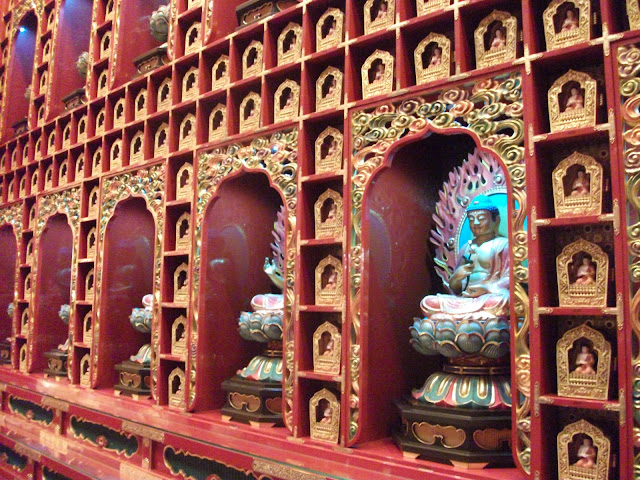