Thai Train to Bangkok - Noodles, Rice and the Inevitable Delays!

So our Thai train journey from Hua Hin to Bangkok certainly didn't appear complicated before we started.  The trains ran directly to Bangkok and we figured it would be a nice way to see some of the Thai countryside and towns along the way, especially as when we arrived on Thursday it had been dark so we hadn't seen much from the taxi.

We arrived at the station in plenty of time to catch the 4pm train which was due to arrive in Bangkok at about 7.45pm.  When we arrived though the ticket office was closed and there was no visible means of buying a ticket from a self service booth or something else.  Fortunately we had plenty of time and a short while after the office reopened and the tickets were brought.

The train station was lovely and very old fashioned in appearance, no electronic displays here just a large board in the ticket office area with the destinations and times of the trains painted on it.  Across from the platform that we were on was an old steam engine which I assume used to pull the trains before they became diesel engines. Another thing I noticed was that there was no overhead or underground crossing to the other platforms as you'd usually get in the UK, no you could just simple walk across the tracks at designated spots. The locals happily just stood in the middle of the tracks moving out the way as a train approached. 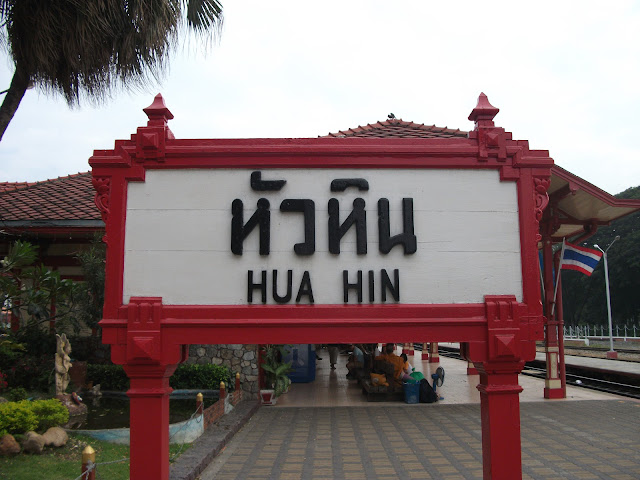 The trains are now all diesel (or at least all the ones I saw were) and if you want a cigarette you just go and stand at the end of the carriage on the steps that lead up into the train.  The doors didn't appear to be closed so as trains were approaching and people were getting off they'd more or less jumped off before the train even stopped.  Shortly before one of the trains arrived a woman appeared with a large tray stacked high with bowls of noodles.  Then as the train pulled in her and some others walked up and down the platform selling the bowls of noodles through the open windows to passengers on the train.

Anyway back to our train journey ..... 4pm came and no train appeared we eventually found out it had been delayed but there didn't seem to be any indication as to when it was due so we waited and we waited and eventually the train appeared over two hours late!!!  Of course by this point it was almost dark so our plan to see some of the Thai scenery on the way up to Bangkok went out of the window but at least the train had arrived. 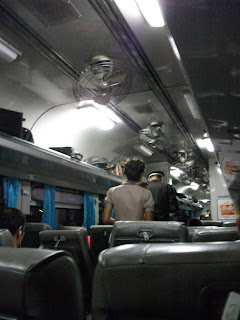 This picture shows the inside of our carriage fortunately we did have air conditioning!  Shortly after leaving one of the members of train staff came to take food orders for noodles.  We didn't have any but this turned out to be similar to my experience at Hua Hin only I assume in this case they phoned ahead with the order and then when we arrived at that station the noodles were dispatched to those who had ordered them by the train staff.  At another station the people selling actually got on the train and walked up and down the carriages selling all sorts of food none of which I could identify from a quick glance as they passed.

Sitting adjacent to us for the whole journey was an elderly Thai lady who kept me more than entertained throughout.  She declined the noodles that were being sold and it quickly became apparent why as she had come prepared for the journey.  First to appear from her bag were some noodles in a banana leaf which she proceeded to polish off.  Later in the journey she got out a hard boiled egg, a bag of plain rice and a bag with a sauce of some kind in it.  She then broke the egg up into the rice, poured the sauce on and mixed it in with the rice to eat.  In between eating she had her shoes off for much of the journey and was constantly picking at and playing with her feet and when not doing that was sitting cross legged on the seat playing with her mobile and taking calls.  I was grateful for her as all I could see from the window was the odd built up area, small bonfires on the sides of roads besides small dwellings and numerous stray dogs wandering around these areas.

When we finally arrived in Bangkok, although the train had only been two hours late when it reached us by the end of the journey it was three hours late!  So after stepping over the many homeless people who use the station as a shelter at night we got a taxi straight to our hotel.

My time in Bangkok was fairly relaxed and at least this time I did manage to go out on my own without getting lost which I was pretty pleased about.  At one point I took myself to a park nearby and armed with a good book sat there for a while reading and despite sitting in the shade it didn't take long for me to get very warm.

I've since discovered that this song by Noel Coward was written about Bangkok and thinking back to me sitting in the park at midday this seems very apt .....

'In Bangkok at twelve o'clock they foam at the mouth and run, but mad dogs and Englishmen go out in the midday sun.'