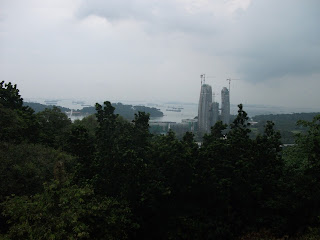 So this weekend we took an afternoon trip to Mount Faber.  That makes it sound like a big mountain which I guess for Singapore it is as they don't have mountains here but in reality it is only really a hillock.  Still it's surprising how you notice any vertical climbs after living here for a while!

Mount Faber was originally named Telok Blangah and was once the seat of Singapore's temenggong or chieftain.  I gather it got its present name in 1845 and was renamed after government engineer, Captain Charles Edward Faber.

We took a taxi up to the top, perhaps we should have walked but the taxi driver just kept going and having not been there before we weren't exactly sure what to expect or where the best place to get out at was.  Besides as I mentioned before walks up steep inclines particularly in this heat and humidity are not what they are cracked up to be! 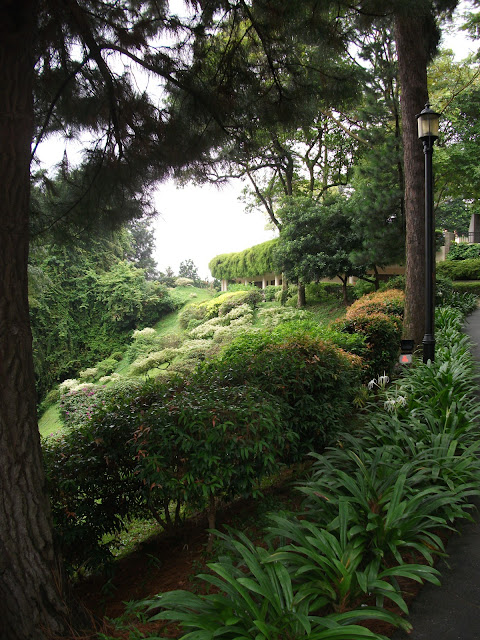 Once we reached the top we were dropped off near a cafe and what seemed to be a conference and dining centre called the Jewel Box and from here it was a short walk to the viewing point at the top.  Unfortunately it was a typically wet and therefore slightly hazy / cloudy day so the views weren't brilliant and you couldn't see that far.  Perhaps also this is something that should be done sooner as a lot of the views did seem to me at least to be the same views as at other vantage points in the area just from a different angle.  For example the view towards the city of the CBD skyline﻿.

On the plus side though there were lots of helpful boards pointing out the main points of interest you were looking too and markers on the ground pointing towards key points on the island and the direction of places beyond such as Bangkok, the Indian Ocean, Indonesia, Malaysia, Brunei and so forth.  There was also a fascinating set of murals illustrating key points in Singapore's history from the point of discovery when legend has it that a Sumatran prince visiting the island of Temasek saw what he thought was a lion which prompted him to name the spot Singapura or Lion City, Sir Stamford Raffles colonisation of Singapore for the British, the Japanese invasion in the Second World War right through to a mural depicting modern day multi-cultural Singapore. 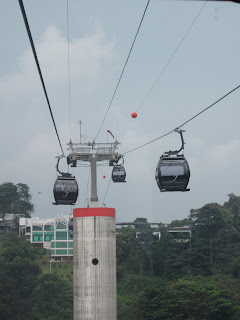 From here we decided to catch a cable car to Sentosa. I've only been on the monorail to Sentosa so I thought it would be fun to get there via another means and would hopefully provide some lovely views.

I was surprised by high up the cable car was but how smooth a ride it was and we were lucky to have a whole car just to the two of us.  So plenty of opportunity to take photos without getting in other people's way.  Again the views were restricted due to the weather but we got some nice views back towards Singapore, across Sentosa, across the port of Singapore and out to sea.  There was also a cruise ship moored in port and we went right over the top of it so had a bird's eye view of all the people on the ship lounging by the pool (which wasn't very big though they did have two pools).

You could easily pick out the merlion at Sentosa but again some of the views were a bit disappointing as where there is building work going on on Sentosa at times you were just riding over what looked like a building site.  Nonetheless though it was a nice alternate way to arrive at Sentosa.

After a wander around Sentosa, which is always a pleasant though always busy spot to while away an afternoon we ended up at the Hard Rock cafe on Sentosa and had a couple of drinks in the bar. This was made all the more fun by the unexpected entertainment provided by the bar staff. They suddenly started dousing this one girl in water, spray cream, and the fruit juice mixers they use for cocktails etc. and she ended up absolutely drenched. Though she did get her revenge on a few of her colleagues as well by giving them a good soaking too. It turned out it was her birthday and this is a little ritual they have for anyone on duty on their birthday! If it were me I think I might try and keep my birthday quiet .....﻿ 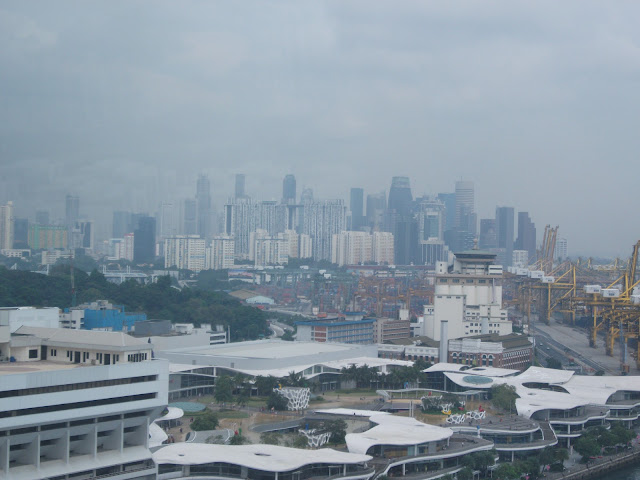