On the Saturday we decided to do another of the walking tours we have in one of the guidebooks we own, this time in Chinatown.  I've been there before a few times but using the guidebook to see some points of interest seemed like a nice idea.  Though we do look every inch the tourist doing it!  I was also on a mission to get a waving lucky cat (tacky I know but that was part of the appeal) and I figured Chinatown might be the place to get lucky so to speak.

Just briefly away from Chinatown and our walk when we go to the MRT station where the walk starts I noticed for the first time a shop in the station selling swords!!!  The mind boggles at why anyone wanting a sword would consider going to the local MRT station and I can't imagine ever finding the same shop in the UK at a tube or a train station.  I think it would be a recipe for disaster but clearly not here!

Anyway back to the walk, we started on the edge of the Central Business District (CBD) as Chinatown is adjacent to that part of the city.  Chinatown was the area where originally the new immigrants, in the majority from China, slept and ate.  At that time they worked primarily on the shores of the Singapore river where commerce occurred and the area became known as Chinatown.

Along the way we took in several temples each with the lovely smell of incense wafting out to us as we approached.  The one in the picture above is the Thian Hock Keng Temple which was built between 1839 and 1842.  Its name translates as Temple of Heavenly Bliss and it is the oldest and most important Hokkien temple in Singapore.  It was built on the site of a shrine to the goddess of the sea, Ma-Chu-Po which was once the favourite landing site of Chinese sailors when the road the temple is on (Telok Ayer Street) ran along the shoreline.  The road no longer does and is some distance from the water and is another example of where land reclamation has been used to expand Singapore.  Raffles Hotel is on Beach Road which once had a view of the sea, if you've ever been to Singapore you'll know that the sea is no where near the Raffles Hotel now!

Whilst on the walk we found a tiny free museum called the Fuk Tak Ch'i museum which has more information about the area and its past and saw many beautiful shophouses as we followed the route.  We were also taken to Club Street which once housed the Chinese guilds and clubs though now is a good place for restaurants and bars.  One of my previous visits to this street was to go to one of the bars, and as I can only lay claim to that I think that is a good example of why I needed to get a bit of the culture too and learn a bit about the history of the street!

We finished our walk right in the heart of Chinatown which is a mass of stalls selling all manner of things, tacky souvenirs included and yes I got my cat!  It truly is tack but I love it and it is now happily waving at me as I write! 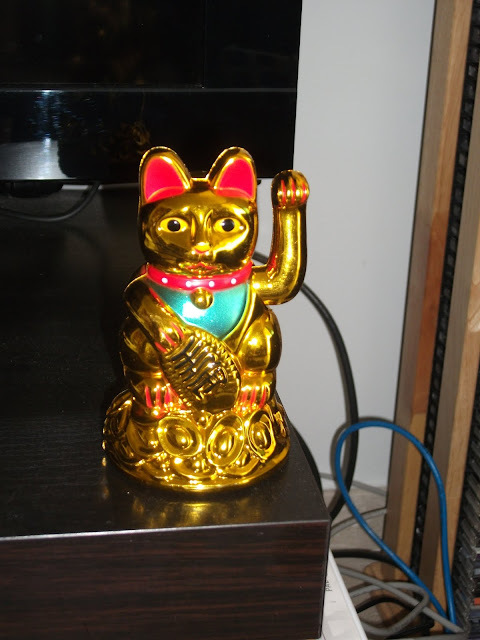