Last week I had the good fortune to witness a day that will stay with me for a very long time.  I was able to watch the Thaipusam festival here in Singapore.  I really am not in a position to be able to convey exactly how important Thaipusam is to those who take part or fully explain what is involved for those devotees.  I will, however, describe what I saw happen on that day and hope this conveys some of the experience to those who have not seen it for themselves.

Thaipusam is a Hindu festival, celebrated mainly by the Tamil community, which is held annually in honour of the Hindu God Subramaniam (Lord Murugan).  The day is observed as one of prayers and thanksgiving for wishes that have been granted.  The ceremony involves the devotees who are giving thanks carrying either milkpots, wooden kavadis or the spiked kavadis (as in some of the photos here).  The spiked ones are attached to the devotees skin by way of hooks and skewers.  The first picture below also shows a devotee who had hooks attached to him with limes hooked on to them.  The procession begins early in the morning and continues throughout the day into the evening.

I really did not know what to expect from the day but I arrived early and ended up staying until late afternoon.  As the day progressed I had a definite feeling of wanting to witness as much as I could of the events.  The procession in Singapore began at Sri Srinivasa Perumal temple on Serangoon Road in Little India and ended at the Chettiar Hindu temple on Tank Road.  The devotees carrying their kavadis for 4.5 km which is a long way in this heat when you consider what they were carrying, which I do not imagine being light.

As I said not knowing what to expect or indeed exactly how the day panned out I started watching them at the point that they left the temple on Serangoon Road and began their walk.  It soon became apparent though that we, despite not being involved in the festival, were free to walk the length of the route with the devotees if we wanted to.  So I did just that.  Those who are carrying the kavadis are joined by many others taking part who are simply walking the route, or singing, chanting, offering up prayers and I guess encouraging and supporting those carrying the kavadis to keep going.  It did feel initially like I was intruding but as the morning progressed it seemed that those that were taking part welcomed the attention and interest from locals and tourists alike and were happy for photos to be taken and for you to join them. 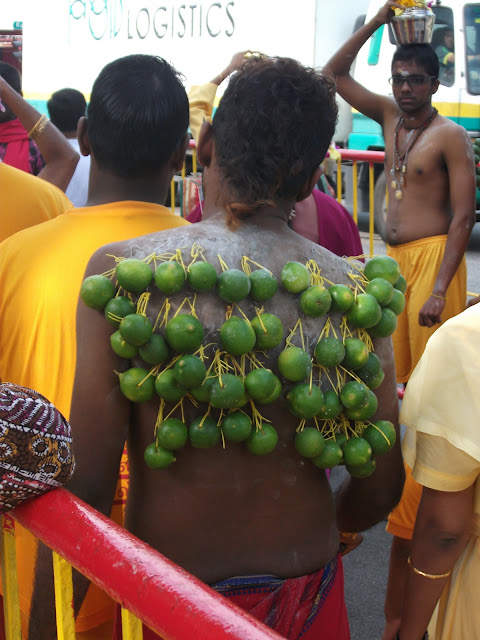 Along the route there were numerous food and drink points which again I assumed were just for those taking part.  I'm still not sure if they actually were or not but I was kindly given a bowl of delicious rice and something to drink.  It was a very hot day and I was glad of it so I really admire those taking part in the festival.

We eventually arrived at the end of the walk and at the other temple, again I assumed that we would be unable to go any further.  I was wrong though as we were all welcomed into the temple to see the final part of the ceremony and the removal of the kavadis.  Again there were no restrictions on the taking of photos or on where we could go within the temple.  As those who had walked the route arrived to give thanks and offer prayers we, as onlookers, were welcomed in and given the opportunity to witness this wonderful finale.

It truly was a memorable day.  I never could have imagined I'd spend most of the day there, that we'd be made so welcome and that I'd leave feeling that I had been witness to something very special that day in Singapore. 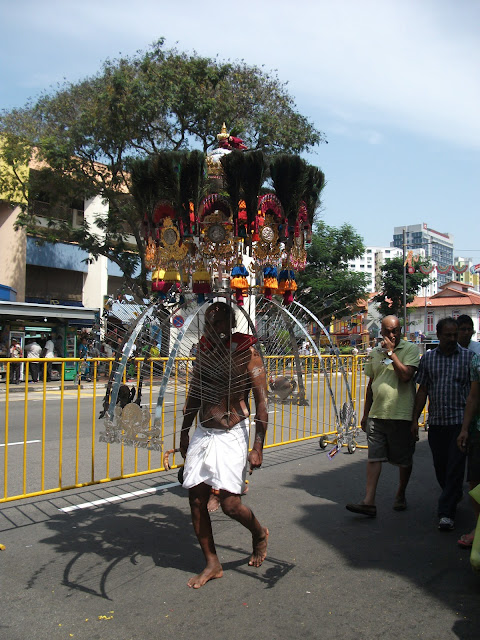 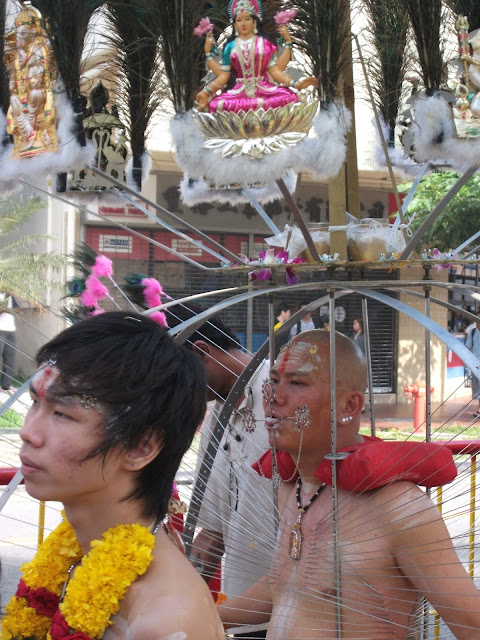