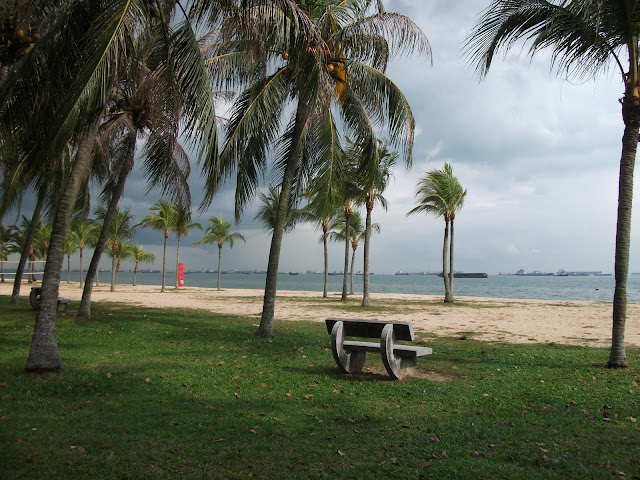 Last week I had one of those days where I just needed to get out for a while.  I feel bad saying that as ﻿I don't have much to complain about but I just needed a change of scenery.  We live just a very short walk from the East Coast park, somewhere I've written about previously but my last visit was at the weekend.  A time when it is full of people enjoying the open space, the BBQ pits and the opportunity to cycle, roller skate or walk.  Whilst there is plenty of space for all I'd never been on a week day so decided to take a stroll up there for some fresh air and to see what the park was like then.

The East Coast park was built on land reclaimed from the sea and is just one of the numerous green spaces in Singapore.  To get there I have to walk through an underpass underneath a motorway and although it's well lit and there are security cameras around I'm not sure I'd want to walk it late at night on my own.  It also feels as if you are literally walking on to the motorway!  However it is well worth it because as soon as you come up the other side and pass the few cafes and restaurants you are in the park and would hardly know you were so close to a major road.

What a difference going on a weekday makes too, there was hardly anybody about, the BBQ pits were empty just a couple of runners, cyclists, dog walkers and a hand full of others enjoying the walk.  I had the place to myself almost and I realised how much I've been missing out on by not going back and exploring on a weekday sooner.  The weather was not completely on my side but that did not matter, with hardly anyone around there were plenty of shelter points to pop into as and when I needed to.  In fact this only made it better as there was a wonderfully fresh breeze from the sea as I walked, a very welcome relief in Singapore!

I have no excuse for not going back sooner as it is on my doorstep (in fact you can see the sea and ships from our condo) and is totally free so is a great way to spend an afternoon if I have the time.  Now I've seen it in a new light I'll definitely be returning when I need to escape for a while.
Email Post
Labels: day to day life East Coast Park food Katong me parks and gardens photos places to visit restaurant Singapore walking weather