Apologies firstly to anyone who doesn't like seeing feet - you may want to look away now!  For those still reading though ﻿I ended up having a fish spa by accident but it is something I've wanted to do so although not planned I'm glad I've now done it.  We were meant to be going on the Singapore Flyer but a thunderstorm put pay to that as they had to temporarily close it until the storm had passed.  Not knowing how long this would take we decided to find something else to fill the time and that was when we came across the spa in the same venue as the Flyer.  Yes my fiance did it too, not sure he ever imagined he'd be having a fish spa but he was more than game!

Until I moved here I don't think I was even really aware of this, or lets say it isn't as common in the UK but as soon as I arrived I realised fish spas were everywhere in Singapore and I knew I wanted to experience it at some point.  This was only further enhanced by speaking with people who had done it as it just sounded more and more like a fun thing to do. 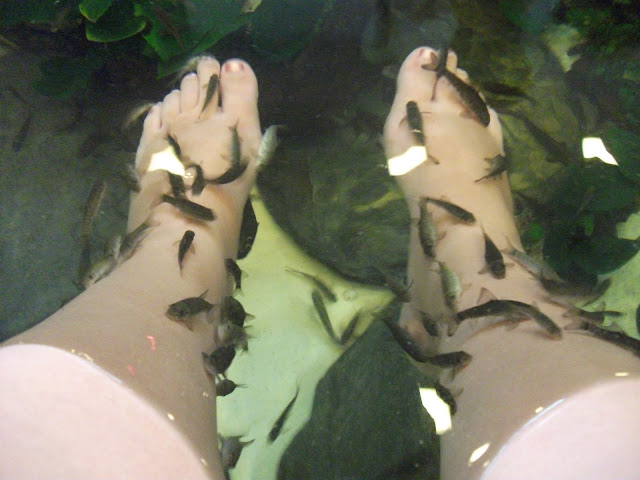 When we arrived we had to hose down our feet and legs with I assume a mild sanitiser that doesn't affect the fish before taking the plunge so to speak.  We paid for a thirty minute session and firstly put our feet in a pool with fairly small fish.  At this point I could barely feel anything apart from a slightly ticklish feeling particularly around my toes and underneath my feet.  The fish they use are Garra Rufa or Doctor Fish and the procedure removes dead skin (the fish nibble it off) and is regarded as being good for the circulation and very relaxing amongst other things.

I was almost a tiny bit disappointed that I couldn't feel more at that stage.  However we were then moved to a second pool with bigger fish in and yes you could really notice the difference.  I could feel the fish nibbling at my feet and it was even more ticklish than the first pool had been.

I can assure anyone thinking of doing it that it doesn't hurt it just feels a bit strange and very ticklish.  I'd definitely do it again though as I felt very relaxed afterwards and my feet felt really smooth too.  I've just got to maintain the good work of the fish now!
Email Post
Labels: photos places to visit Singapore Singapore Flyer treatments weather