Over the Chinese New Year holiday weekend I got the opportunity to do something I've never done before, the Yusheng!  Along with some good friends we had decided it would be fun to have a Chinese meal during the festivities and opted for the Royal China restaurant at Raffles hotel.  I've actually eaten there before but it was a long time ago and on that occasion we were dining on dim sum and if I'm honest I don't remember a great deal about it.  So I was looking forward to returning again.

This time instead of dim sum we opted for the a la carte menu and decided to also take the opportunity to celebrate the Chinese New Year with the Yusheng.  The yusheng is a part of the Chinese New Year celebrations associated predominantly with Singapore, Malaysia and Indonesia.  The contemporary version of this dish was actually created in the 1960s in Singapore as a symbol of prosperity and good health.  It is usually served as a fish salad mixed with shredded vegetables and various sauces but we opted for mango slices to replace the fish.  The end result was beautifully refreshing and very delicious. 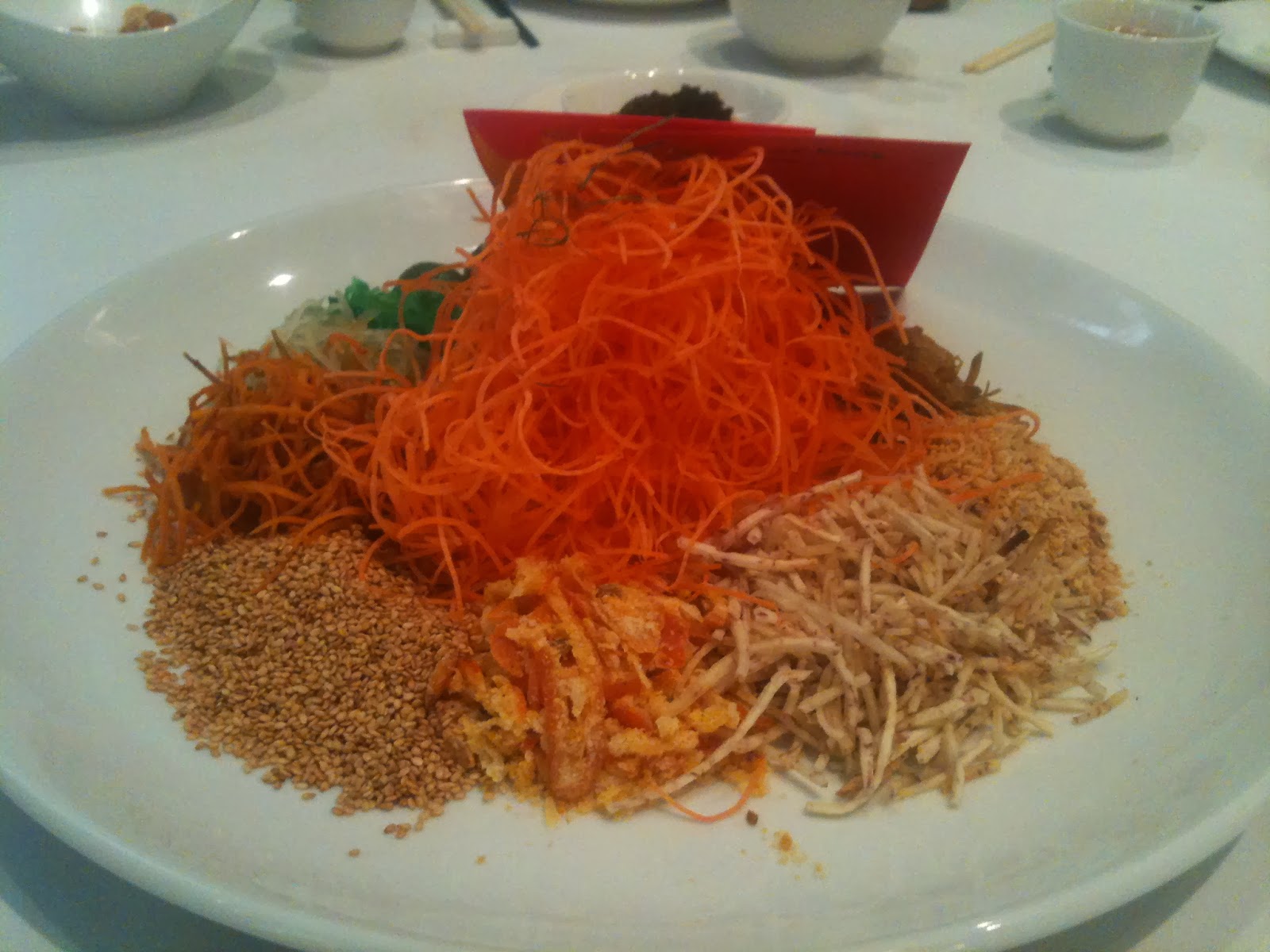 It is normally served as part of a multi-dish dinner, generally as the appetiser.  True to tradition our yusheng was brought out first and we had a waitress add the additional ingredients whilst reciting auspicious wishes.  The extra ingredients are, oil for prosperity of four seasons, plum sauce for the sweet circle of happy reunion, fish (in our case mango slices) for a year of everlasting surplus, lime for a golden harvest with good fortune, five spice and pepper for double happiness and health and crackers for blooming wealth and abundance.

Once everything has been added to the salad it's time for the fun part, the Lo Hei.  This is the bit where you stand up and get to join with your friends in tossing the salad as high as you can with your chopsticks.  Basically you are tossing it for good fortune in the coming year.  It's believed that the higher you toss the salad the greater your fortunes will be.  We all had great fun doing that and made quite a mess (see my photo below), lets just say I was glad I didn't have to clean it up after we'd finished.  After we had finished we then ate the salad, I was told that you are supposed to ensure it is all eaten to avoid losing any good fortune.  There was no chance of us leaving any though as it really was incredibly good.

As I mentioned we didn't just dine on the yusheng though and afterwards we shared several other dishes from the a la carte menu.  A few of which are in my photos below.  They were all very good and none of them lasted long.  A couple were so good that we ended up ordering more of them.  It really was a fun meal.

Having the chance to joy in with a Lo Hei was not something I imagined I'd have the opportunity to do.  It was a great day and Royal China was an excellent place to have this experience.  Here's hoping for a great Year of the Horse!