I went on my second Red Dot Roaming adventure recently this time starting at Ang Mo Kio MRT.  My day job has taken me to the Ang Mo Kio area in the past but other than that I've never really ventured there.  I wasn't sure what was there but from a little investigation it seemed there were several parks in the area and that the Lower Peirce Reservoir was also close (ish).  The day I chose to go was a perfect day for walking and exploring.  It had rained a little earlier in the day and was dull, overcast and not too hot when I got off the MRT.

Anyone who has lived in or knows a little about Singapore may be familiar with the term, ang moh, it is often used to describe westerners and is a Hokkien phrase meaning 'red hair'.  It's easy to assume therefore that this part of Singapore took its name from the same phrase.  There are several theories as to how the area got its name but it is believed that the name was derived from the combining of two Hokkien phrases.  Ang Mo Dan which means rambutan, (a red fruit covered in hair) and the suffix 'kio', which means bridge or bridges, which was added as an extra description to distinguish exactly where the area was as there were many bridges built around this area. 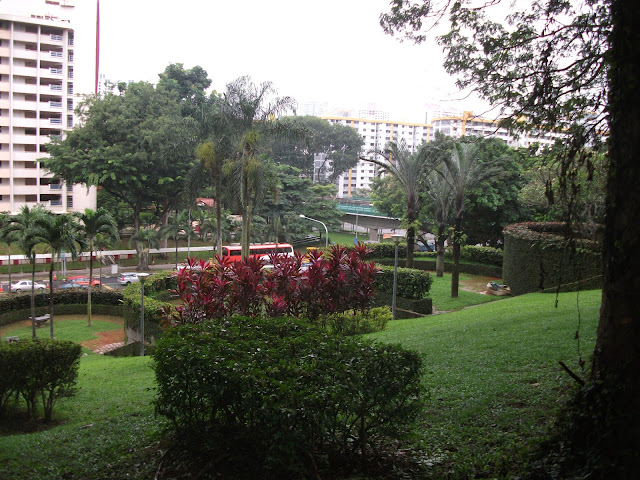 From my preparation for my trip I'd established there was a park right by the MRT so this seemed the perfect place to begin.  I was surprised when I came out of the MRT, mainly because hills seem so infrequent in Singapore, to discover that the Ang Mo Kio Town Garden East (as I discovered it was called) was actually on a hill with stairs built in to climb to the park at the top.

When I reached the top, I discovered a lovely, well maintained park to enjoy a stroll around.  There were information boards about the history of the area and suggested walking routes to discover some of the history and area of Ang Mo Kio for yourself. 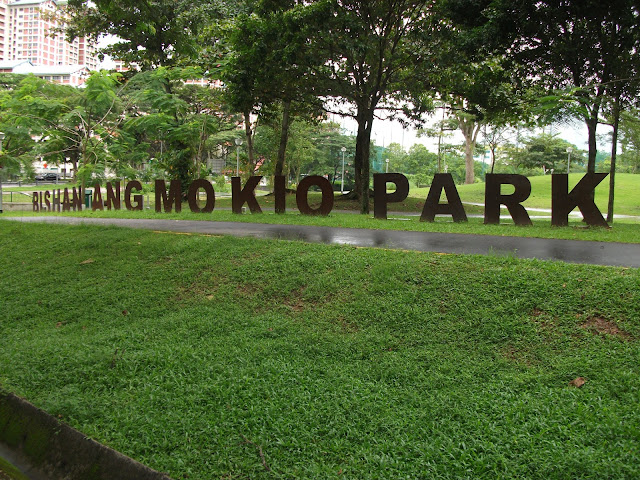 After exploring here I walked towards the Bishan Ang Mo Kio park which was also on my planned route for the day.  My walk there took me mainly past HDB's and after a shortish walk I reached the edge of what, from maps I'd looked at previously, seemed to be a fairly large park.  The maps did not lie and this park is a pretty impressive size with lakes and lots of space to sit and relax.  I also saw signs advising what you should do if you get a monkey in your house.  I've not seen those signs anywhere else before but as the park is not too far from the Lower Peirce Reservoir area I guess it's far more feasible that it could happen.  I was really struck by how lovely a park it seemed and how it was utterly deserted.  Admittedly it was a week day afternoon and it had been raining but there was no one there, maybe it's very different at weekends though. 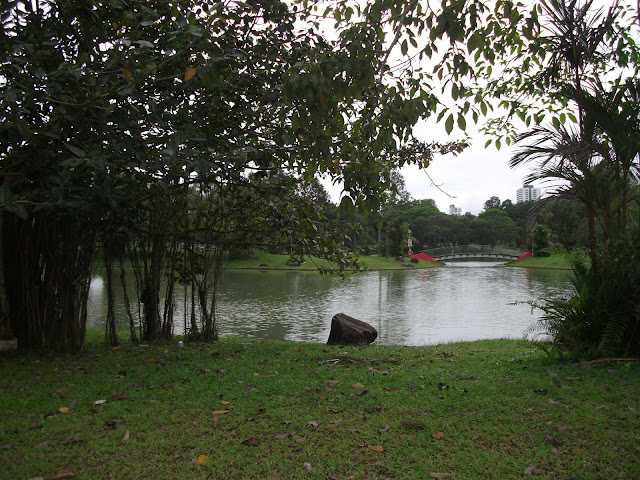 Before I went on my roam I'd read  one of many stories about how the area got its name.  This one being about a red haired British lady, Lady Jennifer Windsor who was married to a Lord Windsor who had an estate in the Upper Thomson area and had lived there from the 1920s until after World War II.  It was a terrible accident that linked her to one of the bridges in the area crossing a stream running from the Lower Peirce Reservoir.  Tragically Lady Windsor's three children were lost one day whilst on their way to visit a family friend staying nearby.  It was subsequently established that her two sons had been playing near a bridge when a sudden gush of water had swept them away, their bodies were later found but the body of her little girl never was.

Soon after this happened locals reported hearing the cries of a child and this prompted Lady Windsor to stay by the bridge for the rest of her life.  It is said that her constant presence caused locals to name the area 'Red Haired bridge'.  Apparently it was only after her death in 1963 that locals stopped hearing the cries.  I also read that the bridge, though now disused, was still visible near the meeting point of Ang Mo Kio Avenue 1 and Upper Thomson Road.  I was interested to try and find this old bridge and as the Bishan Ang Mo Kio park ran along Ang Mo Kio Avenue 1 I thought it would be a pleasant walk to do on the way.

Sadly I couldn't find the bridge, I don't know whether I just missed it, if perhaps it's now gone or if it has been swallowed up in parts of the reservoir no longer accessible to the general public.  I'd love to hear from anyone familiar with this story and bridge who perhaps knows though. 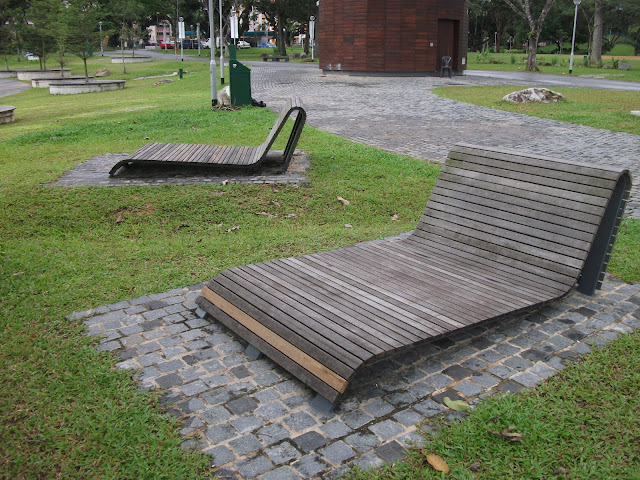 After walking all that way, which though it doesn't look far on a map filled most of the afternoon I'd reached Lower Peirce Reservoir.  I had originally thought I might then take a walk around some of that as I'd previously walked around some of MacRitchie reservoir.  However by the time I arrived I was tired and really ready just to finish my exploring there and come home.  I think Lower Peirce Reservoir is one to visit another day. 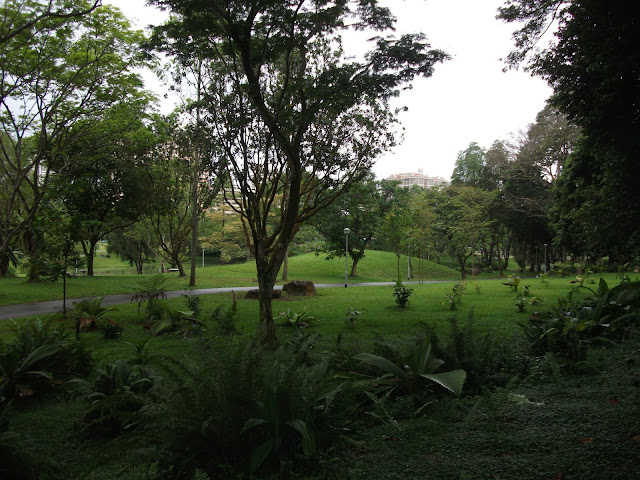 If you missed my first Red Dot Roaming post you can check it out here.  Stay tuned for the next adventure soon.