As I've mentioned before I live off Tanjong Katong Road and love exploring the local area and its eating options. On a free afternoon I decided to check out somewhere new and I began with Pies & Coffee which opened up towards the end of last year (I think) on Tanjong Katong Road.  They already have other branches around the island though their website only mentions their branch in Rochester Drive.  I assume therefore that one was the first to open. I visited on a week day afternoon and there were only two other people in there (not including staff).  As the name suggests they serve pies and coffee though they do also serve tea and cakes.  Going in the middle of the afternoon I decided to sample a dessert and a coffee, and chose a blueberry crumble and a latte. 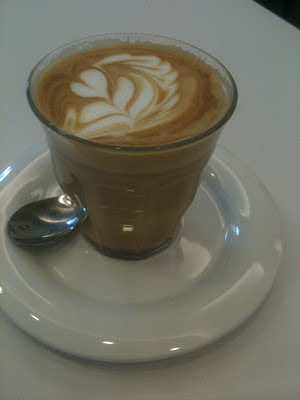 I am by no means a coffee aficionado, despite enjoying it a lot, but I thought the latte was very good.  It was only as I was leaving that I noticed a water dispenser where you could help yourself to water.  I wish I'd noticed that sooner or the person serving me had pointed it out.  I know for next time!

The crumble was OK but obviously (and I guess as you'd expect) shop made so was nothing special.  I actually think it could have done with some ice cream or custard as it was a little bit dry and in the end a bit too much for me to finish.  I didn't try any of the savoury pies or, of course, any of the other cakes or desserts.  I think next time though I might stick to just a coffee.  Regardless though it was a nice little place to stop and while away some time, just a short walk from my home and I'm sure somewhere I'll be going to again.
Email Post
Labels: food Katong photos places to visit Singapore
Location: Tanjong Katong Road, Singapore