Continuing in the series of posts about the business travels that my husband undertakes, he shares his trip to Sri Lanka and the good time he had there.

As a consultant covering South East Asia I often get to travel to some interesting and unusual places, including Vietnam, Philippines and Indonesia in the last few months. However recently a regional client asked us to help them in another market, just outside our usual sphere of influence, therefore at the end of March I travelled to Colombo.  This trip had previously been postponed twice, in fact the second time I was supposed to be travelling Laura was also going to join me, with us extending the trip by a couple of days.  Unfortunately she couldn't accompany me when the trip did actually happen as she was in the UK.

As I mentioned I travel a fair bit for work, but travelling to Sri Lanka somehow seemed to be a little more exotic, exciting and edgy than usual.  I am not sure why, perhaps it is the country’s recent history or the fact that it is not on everyone’s must travel to list, it should be, but more of that later.  So the time for the trip arrived with an overnight flight from Singapore to Colombo (on the Emirates flight that I usually try very hard to avoid on trips back to Blighty) and started really well with a champagne in the Emirates lounge and an upgrade to the posh seats (courtesy of my frequent flyer status), therefore the flight was comfy and sleepy.

Upon arrival (at about 1:30am local time, two and a half hours behind Singapore) immigration was painless, one needs to arrange your entry visa prior to travel, this can be done and paid for ($20 US) online, money was changed (Forex shops at Changi do not carry Sri Lanka Rupees) and a transfer to the hotel was procured from the hotel desk in the arrivals hall.  The journey to the hotel was interesting as shapes of dilapidated crumbling buildings, stray straggly dogs and the odd late night local loomed out of the darkness and took about forty-five minutes.  I stayed in the Hilton Colombo (on the advice of my client) which was located within the Fort area of the city, the city is really small, so staying anywhere is really convenient.  The hotel, itself, is a standard business hotel with all the usual facilities.  After a sleep, it was time for breakfast, which included fruits, cold cuts, western style items (bacon, eggs, hash browns etc), as well as Indian and Sri Lankan options.  Then it was off to a series of meetings with some local retail banks.

After my last meeting I returned to the hotel and decided to have a well-earned beer in the hotel bar.  This was themed as a British style pub and was called Echelon.  I was able to catch the last fifteen minutes of play from the 1st Test Match (England were playing the Sri Lankans in Galle, in the south of the island) over a Lion beer.  Along with the beer they served a bowl of something similar to Bombay Mix, a spicy mix of odds and sods, which was excellent and a great accompaniment to the great cold lager.  It was bloody hot outside, although not as humid as Singapore. 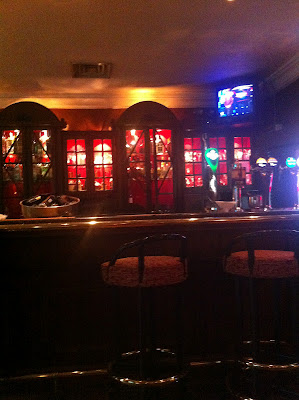 Prior to my trip I had bought the Lonely Planet guide for Sri Lanka and read up on the eating options and with luck one of the recommended places was right here in the hotel.  A Sri Lankan restaurant called Curry Leaf, which essentially serves seafood cooked in the local spicy style using the buffet approach.  The main feature of the restaurant was an amazing fish counter where the customer selects what he wants to eat.  All I can say is that the choice was overwhelming but fortunately the chap before me asked for a selection cooked Ceylon-style and I opted for the same.

Whilst the fish was cooking there was a meat and veggie buffet with all sorts of curries, rice and cooling salad. 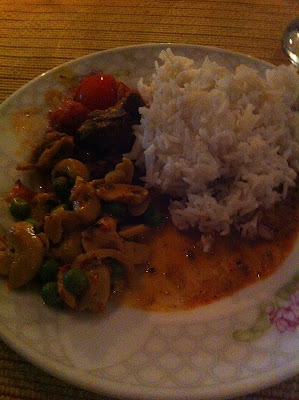 Additionally there was a station serving a local speciality, Kotthu Roti, which is a chopped up roti with meat and many vegetables.  I was keen to try this as I had seen this on travel programmes, where it was portrayed as Sri Lankan drinking food (similar to the late night kebabs that us Brits consume at 2am after a night on the ale) and I can report that the Hilton’s version was delicious. 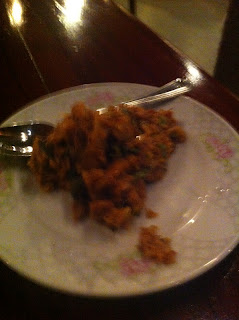 Then the fish started to arrive at the table, dish after dish.  There were prawns, squid and grilled fish, all cooked in wonderful spicy curried rubs and sauces. 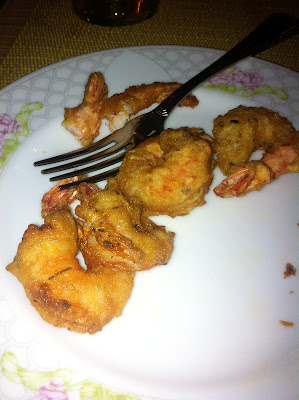 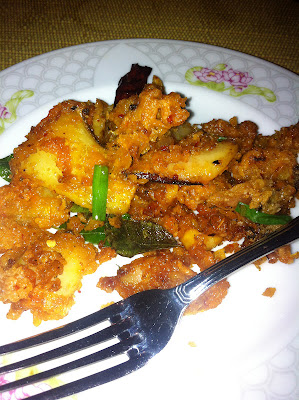 The final course of the meal was Sri Lankan chili crab, this was a thousand times better than the Singaporean equivalent (in my opinion), in that the spice is cooked onto the crab, as opposed to being poured on as a sauce, therefore it is less messy to eat (always a plus for me).

The second day and final morning of my trip was devoted to business meetings.  However upon leaving the last meeting there was a great deal of commotion and noise (including drums, trumpets and firecrackers) on the street outside the office building with many teenage boys shouting and cheering in a possession.  One of the participants was rather larger than his fellow revellers - a fully grown elephant in ceremonial dress, was also walking down the road. 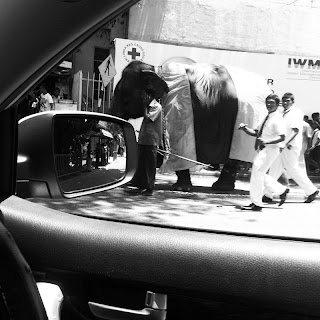 Wondering what was going on I asked my driver (hired from the hotel for about 35 SG dollars for the half day) and was informed that there was a schools cricket final that afternoon.

Having finished my meeting and my flight back to Singapore not being until the following afternoon I had some time to explore the city a little, so I decided to have a walk along the beach.  Initially this was a little stressful, given the constant hassle from tuk-tuk drivers looking for customers (offering to show you the sights etc. all offers that I declined).  I walked along an area called the Galle Face, which is essentially a park for walking, meeting friends, flying a kite, playing cricket or going for a dip in the clear blue water of the Indian Ocean.  Along the promenade there were also a number of stalls selling snacks and drinks, most of which smelled wonderful. 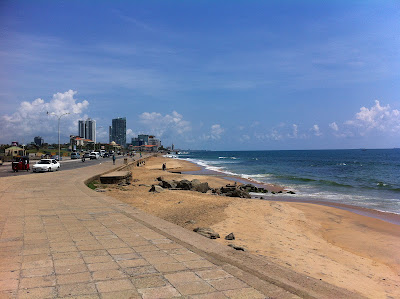 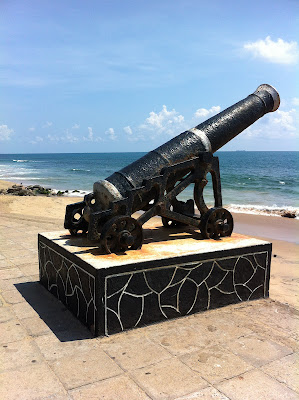 Whilst on my walk I ended up having a beer in The Veranda Bar, at the Galle Face Hotel, a sort of Colombo equivalent of Raffles Hotel, i.e. a colonial relic of yesteryear, which I have to say, was truly wonderful.

The atmosphere was relaxed and not at all stuffy (as you may have expected) with the bar overlooking lush tropical gardens (including a boy that was climbing palm trees) and the aforementioned ocean in the background.  I had two large bottles of the local beer (I always try to sample the local drop on my travels, Sri Lanka’s is called Lion), that cost an eye-poppingly cheap nine SG dollars. 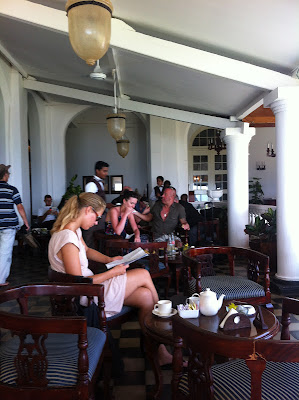 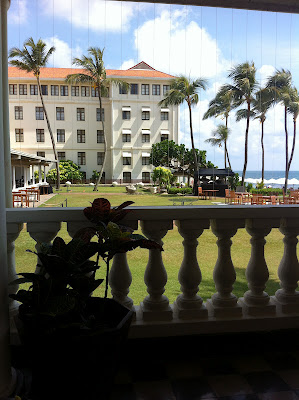 In the evening I visited the Cricket Club Cafe, a bar dedicated to the sport I love, with memorabilia from various international cricket teams on the walls.  All the menu items are named after cricketers, I had a Ganguly Grill (a chicken parma with chips), named after the Prince of Calcutta, Sourav Ganguly, the former Indian captain.  As good as the cafe was, the journey to and from the meal was the most interesting or should I say, exciting (read scary, nail-biting, flume choked ten minutes of fun) ride I have had in my life, as I foolishly decided to utilise the services of a tuk-tuk driver. 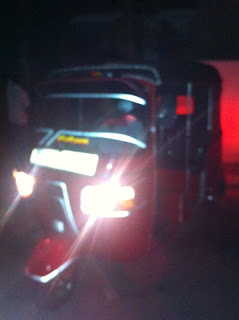