UPDATE: This restaurant is now closed.

Like most people living in another country there are times when I crave a taste of home.  Luckily, for all the delicious local food on offer there are also plenty of Western alternatives to satisfy me and even a few Waitrose (a UK supermarket chain) products in some of the supermarkets and small food courts in some of the Marks and Spencers stores.  Though these do generally have to be occasional treats as they are not usually the cheapest options available.  I've also recently learnt that UK Cadbury's chocolate is available at Mustafa's thanks to Singapore Actually, so I'll have to pay them a visit soon I think.  More often than not though anything we are really craving (which we can't get here or else something close to it) can be brought back with us after a trip back to the UK.

One thing though that we've really missed and not been able to find anywhere were pork pies.  For anyone reading this who is not familiar with pork pies and wants to know a little bit more check out Wikipedia here.  It has therefore become a regular thing to try and make sure at least one pie is consumed on a trip home to make up, in some way, for not been able to find them here.  However all that changed last Friday when we struck gold right here in Singapore. 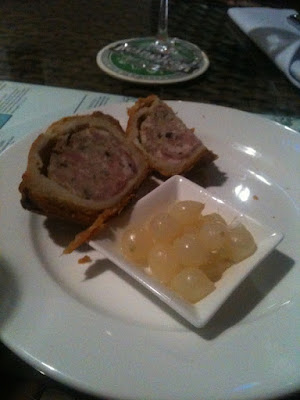 Our Friday night had taken us to the Club Street area of Chinatown.  The restaurant we'd hoped to go to was full and, of course, we had not made a reservation so we were left wandering around looking for an alternative.  We then stumbled across a place called Emporium (just opposite The Screening Room), a bar/restaurant we must have walked past many times but never taken much notice of before.  Initially we were more drawn to the fact there were tables free there, but the food menu advertised itself as being British pub food and looked appealing so we sat down.  Only then on closer inspection of the menu did we make our pork pie discovery which of course meant we had to order one to try.

I was a little concerned that it might be a version on the theme of a pork pie rather than what we were hoping it would be (this has happened with other food at times) but my concern was groundless.  The pork pie (a Melton Mowbray according to the menu) looked exactly as I expected, arrived with a side of pickled onions and tasted divine.  I could have happily eaten another but feared it would ruin my main course.  We had it as a starter to our meal (it was listed there) something I don't think I've done before if I'm honest, usually having it as a snack or with a ploughman's type lunch.  It certainly wasn't the cheapest pie I've ever had either at $10 a go but somethings just have to be ignored now and again for the chance to enjoy a treat from home.

On looking at their website since I've also discovered they even serve black pudding in their breakfasts.  I'm not a huge fan but my husband loves it and I also know a few other expats here who enjoy it too.  I've no idea how authentic it is but this seems like good enough reason to return there again before long so my husband can sample it for himself.
Email Post
Labels: Chinatown expat food me nightlife photos places to visit restaurant Singapore UK
Location: 5 Ann Siang Rd, Singapore 069688