Living in Singapore has given me (amongst many things) the opportunity to learn and discover a lot about cultures that I largely (and could be argued still do) knew very limited details about before moving here.  I particularly enjoy exploring and learning about the history and heritage of this island from its earliest inhabitants.  Last year the Indian Muslim Heritage Centre opened and I decided then that I would like to visit it at some stage.  For various reasons though it just remained somewhere to go but I finally managed to get there recently. 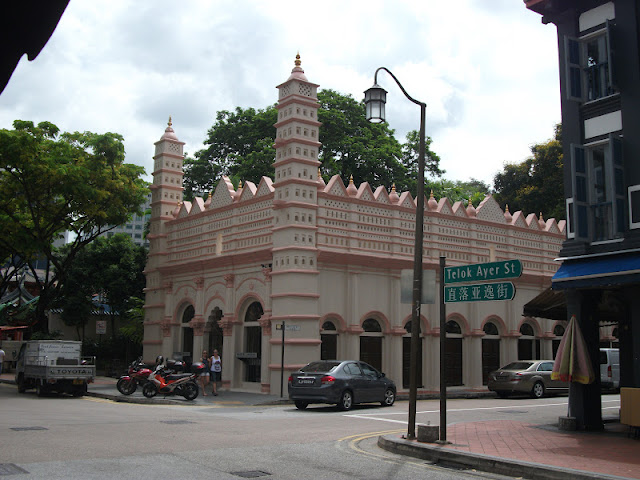 The centre is located in Telok Ayer Street in Chinatown.  The street was named after the Telok Ayer Bay and originally (prior to land reclamation) was a coastal road by the bay.  Telok Ayer Street subsequently became one of the main commercial and residential roads which continued up to the nineteenth century.  As a consequence many temples and mosques were built on the road as grateful Chinese and Muslim immigrants to Singapore showed their gratitude for a safe passage and arrival.

The heritage centre is housed in a beautiful building called the Nagore Dargah.  The building was built between 1828 and 1830 and was designated as a national monument in 1974, one of several buildings on this road to fall into this category.  It was originally known as the Shahul Hamid Durgha and the shrine was dedicated to Shahul Hamid a south Indian holy man.  The building had been shut for several years prior to the heritage centre opening in it last year.

It now houses an interesting exhibition looking at the history of Singapore's Indian Muslim community including their culture, heritage, beliefs and their contribution to Singapore.  The displays include information about the Telok Ayer Street area, how the Indian Muslims arrived in Singapore, the trades they engaged in and information about their lives here through the use of photographs and artifacts.  The centre also has a small cafe where visitors can buy and learn about traditional Indian Muslim food and drink, though on the day I visited only drinks were available.  Lastly you can find out more about the Nagore Dargah and the holy man Shahul Hamid.

You really don't need more than part of a morning or afternoon to visit but it is worth taking a look if you are in the area with some time to spare.  Admission is free and the staff were incredibly warm, welcoming and keen to share their heritage with me.
Email Post
Labels: Chinatown exhibitions food history local food and drink museums photos places to visit Singapore
Location: 140 Telok Ayer St, Singapore 068604