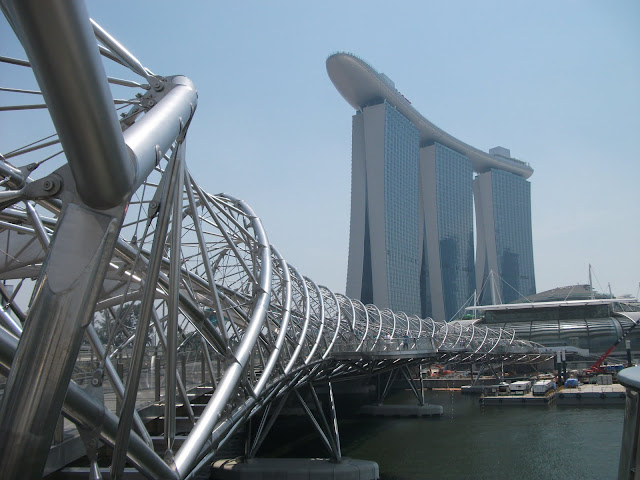 Going on tour buses that take in all the main sights of a city is something I'll often do if I'm only in a place for a brief stay.  Singapore has these buses too and whilst our visitors were here I thought it might be a nice way for them to see the main sites and get their bearings a bit.﻿

There are a few bus companies that run tours, as well as a duck tour option (the ones that go both on land and in water).  I picked the hop on and off bus tour which lets you ride as far as you want, get off if you want to and then rejoin the tour once you've explored an area.  The tours pick up and sell tickets at the Suntec shopping mall and there are a couple of tours you can chose from.  We decided on the Heritage tour as this looked to go to all the main areas and take in all the main sights.  In the end we also decided to stay on the bus and do the whole tour ending up back at Suntec again which takes about an hour.

The tour takes in Chinatown, Little India, Kampong Glam, the Central Business District, the Marina Bay Sands area and Singapore Flyer, Raffles Hotel and lots of other touristy areas of Singapore.  The buses are double deckers and we chose to sit on the open top upper deck.  There are sections towards the back of the bus that have a roof so you can avoid the sun but still benefit from the breeze.  The only problem I found with sitting here was that it was a struggle to hear the commentary above the sound of the traffic etc. so maybe sitting downstairs is the better option.

I did not learn anything I did not already know but given I've been in Singapore just over a year now I'm guessing that is not surprising.  Despite that though it was a fun trip and much kinder on us all, to be on the bus touring around, given the temperature and humidity outside.
Email Post
Labels: Central Business District CBD Chinatown history Kampong Glam Little India Marina Bay Marina Bay Sands photos places to visit Raffles Hotel Singapore Singapore Flyer