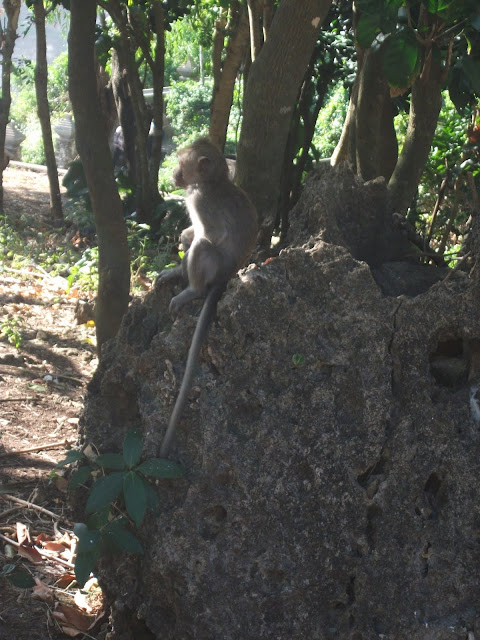 As I mentioned in my last post our base for the week we were in Bali was Kuta but we did venture away from there to see other parts of the island during our stay.  Bali is bigger than Singapore and public transport is not as good so we did what was recommended and hired, through our hotel, a driver to take us to the places we wanted to go to.  Driving (and being a passenger) in Bali is certainly an experience and having someone do it for you who knows the roads seems a much more sensible option.  Even with somebody else driving though my heart skipped several beats as dogs ran across the road within feet of our car and the driver barely seemed to break or slow down.  Thankfully though the dogs all made it safely across the roads.  It was also only from our trips away from Kuta that I appreciated the size of Bali in comparison to Singapore.  We may, in reality, have only visited a small part of the island but the journey times combined with the traffic jams we encountered certainly made me appreciate the difference. 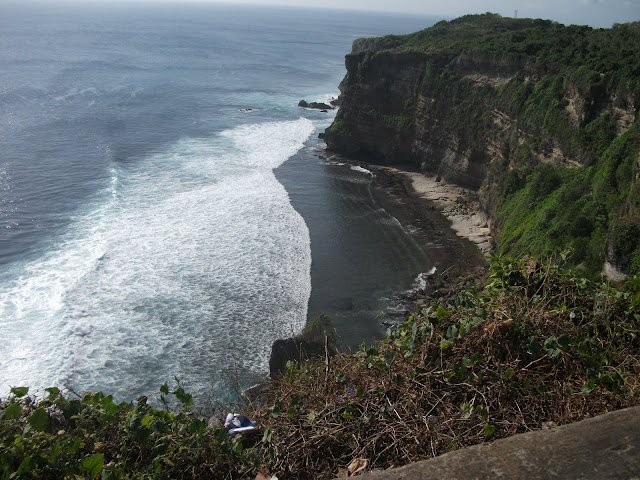 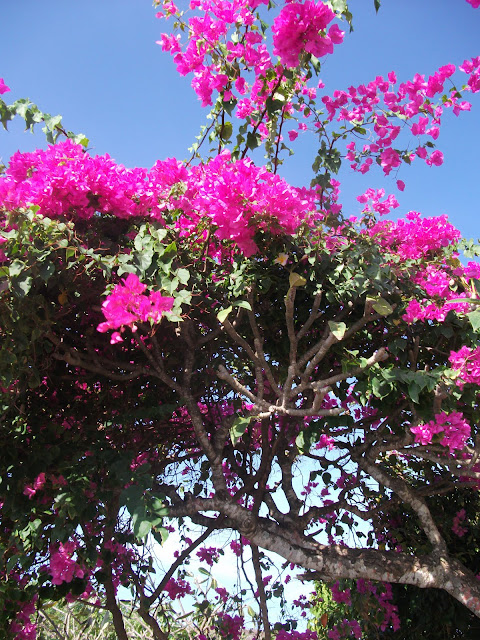 Our first trip away from Kuta took us to Uluwatu.  Uluwatu is a temple right on the edge of a cliff at the Southern most point of Bali.  This part of the island is only joined to the rest of Bali by a thin strip of land and is known as the Bukit Peninsula, it really did seem a world away from the commercialism of Kuta.  It must have been a real feat to build the temple right on the edge of the cliff but it is a beautiful spot with fantastic views looking down to the Indian ocean below.  It was wonderful to be able to stand on the cliff admiring the views and to have driven through vast expanses of countryside to reach our destination, both in total contrast to the built up landscape of Singapore. 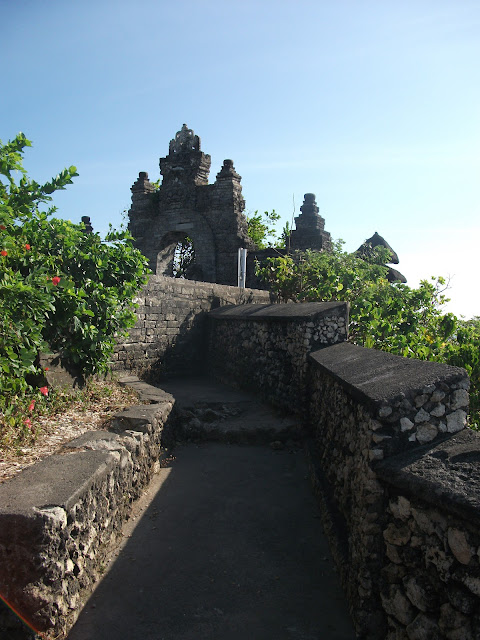 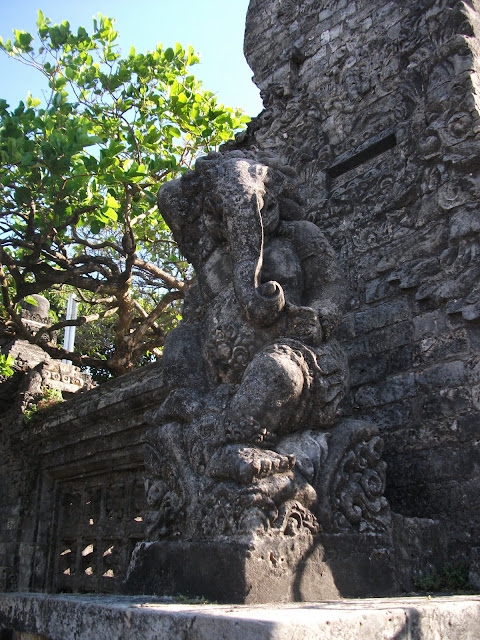 A temple has been known to exist in that spot since the 11th century when it was significantly expanded by a Javanese sage, Empu Kuturan.  Though it is claimed there was a small temple there before then.  As with many temples you need to be appropriately dressed to enter and there are sarongs which you can borrow, if needed, in order to do so.  There is a charge to go in and although you can wander freely around the temple grounds the inner courtyards are only accessible during certain rituals.

You cannot fail to notice the monkeys that live in the temple grounds and surrounding areas as well.  Be warned though the monkeys are very used to people and very adept at helping themselves to anything they can including food, hats, sunglasses, cameras and so on.  It is best to ensure anything loose is tucked well out of their reach.  As with many places you can buy fruit to feed the monkeys though, no wonder they are so tame and cheeky! 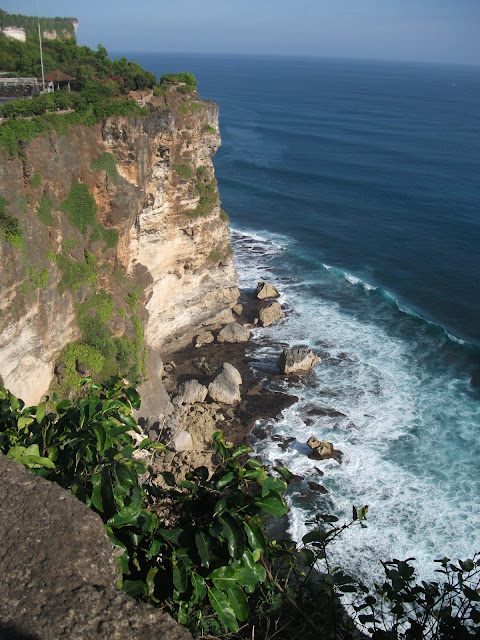 After our visit to the temple our driver suggested we might like to visit one of the nearby beaches before returning back to the hotel.  He suggested taking us to a beach called 'Dreamland'.  This actually made me think of the theme park that used to exist in Kent (where I come from) and seemed a very un-Balinese name to give the place.  However this Dreamland was nothing like that and the beach, in my opinion, was a much more sandy and nicer one than Kuta's.  To actually get to the beach we had to drive through what has obviously become a very commercialised area with golf courses and new developments emerging.  We also had to pay to get on to the complex and therefore to get to the beach.

As you'd expect there were several shops selling a variety of tacky souvenirs and snacks but it was a nice place to finish our day by watching the world go by and the sun begin to set.  Whilst there we stopped at a cafe for a drink and I tried Balinese coffee.  It reminded me a little of kopi in that it was very sweet but it was served black.  I'd have it again though. 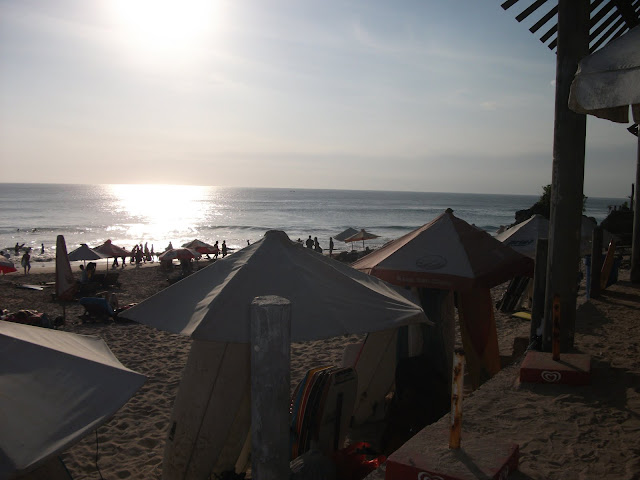 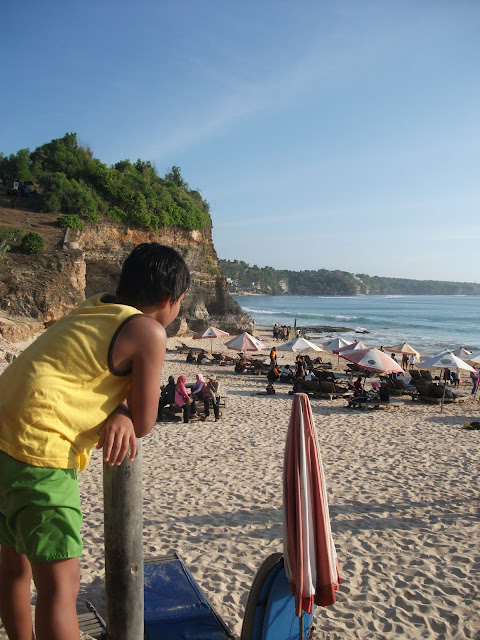 To reach the beach we had to walk down a fairly steep hill and narrow path past a lot of the little tourist shops.  Once we got there though the sandy beach stretching out before us surrounded by cliffs making the beach seem somewhat of a secret find was very inviting.  The beach was full of families and friends enjoying the late afternoon sunshine by the sea and the last surf of the day, there was even a man practicing his cocktail skills with some empty bottles.  Although there were plenty of people around it felt very relaxed and a totally different experience to the beach at Kuta.  To me it felt as if this place was as popular with locals as with the tourists.

It was a delightful day with the beauty of the temple combined with a couple of hours by the beach.  I felt like I was seeing a little bit more of the real beauty of Bali. 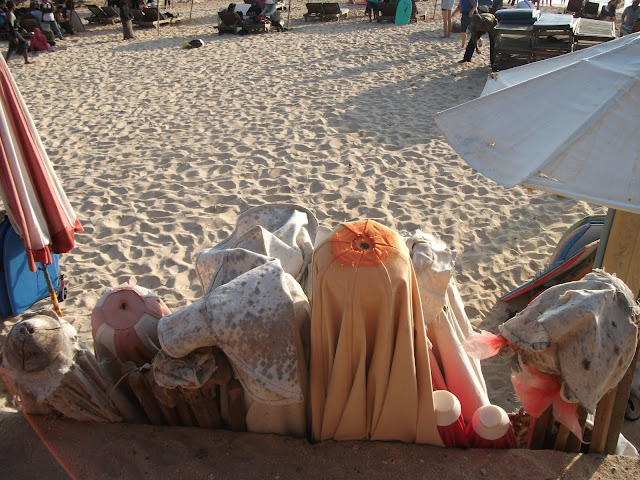 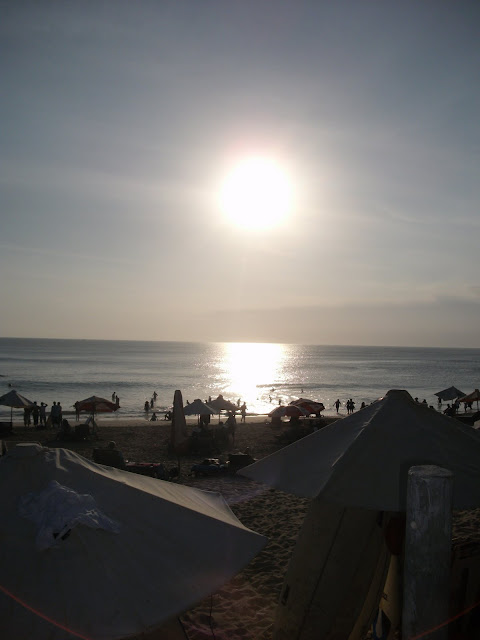 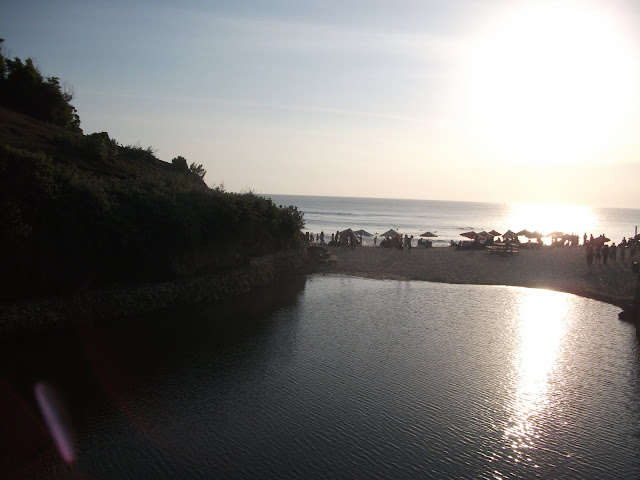