Shockingly I have just realised another food first that I've so far failed to mention!!  I mentioned in a previous post about the Mid-Autumn Festival that took place a couple of weeks ago and that it is a tradition to eat moon cakes at this time.  I therefore insisted that we should buy some to try too.  So we did.

We bought some white lotus seed paste cakes on a recommendation from a lady we bumped into in the supermarket that we went too as she told us they were very good.  There seemed to be lots of different types so I don't know whether we had the best of flavours but a local friend told us not to have the chocolate ones or brightly coloured ones that can be bought as they are not traditionally what a moon cake is.

There were only four cakes in the tin which doesn't sound much but my first impression was surprise as to how heavy they were and how I couldn't imagine being able to eat a whole one due to their size and weight.  So perhaps only four was not so bad after all.  The moon cakes we bought came from Hong Kong but unfortunately I can't tell you much else about the information provided with them as none of the information was in English.  They came in a beautiful decorated tin though which I decided I would keep, the cakes themselves were individually wrapped with 2010 printed on the wrapper with further patterns on and yet further patterns and writing on top of the cake itself. 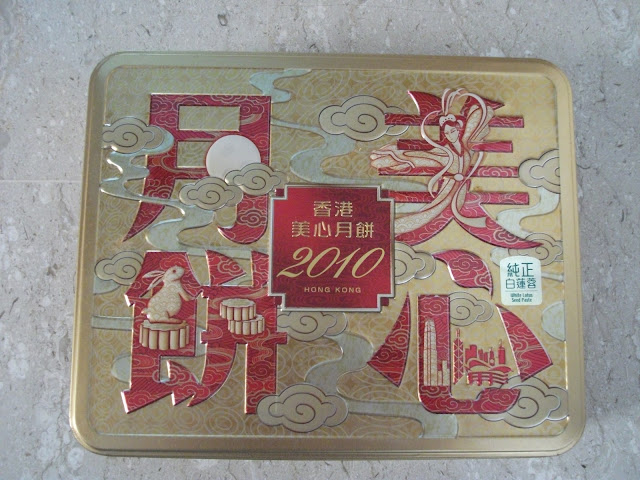 So to the crucial part what were they like ..... well they weren't bad but again I think it comes down to taste and the taste of these is something that Westerners just aren't used to.  The taste reminded me of peanut butter which although not unpleasant seemed a bit strange in a cake.  The closest I can describe what the inside of the cake looked like in terms of consistency was similar to marzipan I guess.

Would I have them again?  Probably not to be honest, but as with everything else new I've had since I've been here I'm glad we bought some to say we tried them whilst we had the chance to do so.
Email Post
Labels: festivals and events food local food and drink Mid-Autumn Festival photos Singapore