Gardens, Turtles, Tortoises and a Stingray

After a busy week of job applications and chores I decided to give myself a day off yesterday and take myself off somewhere and explore.

Earlier in the week my fiance had to go to the Singapore Botanic Gardens for a course with his work and was very impressed with what he saw.  So we talked about going there together at some point but this set me thinking about other similar places that may be worth a look.  One of our guidebooks mentioned another garden called the Chinese and Japanese gardens which I decided might be worth an explore.  It is a bit of a trek (if you can describe anywhere in Singapore a trek given it is a relatively small place) and the book didn't rate it as worth the effort but I figured it was still worth a look.  Especially as within it there was also a Live Turtle and Tortoise Museum which I thought sounded intriguing to say the least!

We live near an MRT line called the East West line, on the MRT maps this is coloured green and the distance I travelled was similar to going from one end of the District line (also coloured green) on the tube in London to the other.  As is the norm on that line I didn't get a seat and by the time some became available I only had a couple of stops to go so it hardly seemed worth it by then.  Funnily enough the MRT are currently running a graciousness campaign to encourage people to give up their seats to those with more need, let people off the train before you get on and so on.  They are therefore playing the most cheesy annoying jingle at all the MRT stations to encourage this.  I really could not see it catching on on the tube, you can view it on You Tube so see if you can track it down.

Anyway back to the gardens, they are over in the West of the island (the furthest West I've been in fact).  The gardens are on two islands on Jurong lake and really are so peaceful.  The only thing spoiling it slightly was that when you first arrive in the gardens you are still so close to the MRT station that you can hear that annoying jingle as the trains come in! 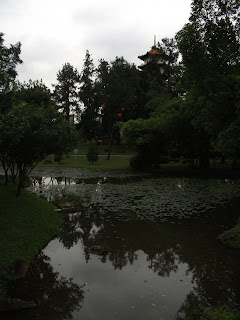 There are several Chinese-style pavilions and a pagoda in the gardens all of which you can go in and get some lovely views over the gardens.  There is also a section with lots of bonsai trees (or penjing) all of which are set in lovely surroundings.  I saw a lot of wildlife too, some lizards but much bigger than what you get in the city and some beautiful brightly coloured birds.

As I mentioned within the gardens is also the Live Turtle and Tortoise Museum, an interesting and intriguing thing to me and I felt worthy of an explore.  I'll be honest that if I'd only be going for this I'd have felt it was a bit of a trek for little reward now I've been but that combined with the gardens made it a worthwhile MRT ride.

When you first go into the museum there is a huge display of all sorts of turtle and tortoise ornaments etc. rather like someone might collect if they were their favourite animals - not great.  You then walk through a number of tanks with different turtles and tortoises in.  I never realised there were so many breeds and some were very ugly but others kind of cute too!

The best bit though was the last part, a mini garden within the museum where they let some of the turtles and tortoises out and you can walk round the pool and gardens in and amongst them in some lovely peaceful surroundings.  The guidebook didn't rate the gardens much at all but I personally think they were well worth the visit with the turtles and tortoises a quirky little extra.

Yet again in the evening we then went out for something to eat (this is starting to get a bit of a habit now not that I'm complaining) going to a seafood restaurant, fortunately with other non-fish options but yes for anyone who knows me still a bit of a shocker!  Tonight's new try being stingray ..... never did I imagine I'd being trying that but I gather it is something of a local delicacy here.  Yes it was OK too, a bit more fishy tasting than some of the other dishes I've tried recently but it reminded me, taste wise, of the fish you get when you have fish and chips in the UK (obviously without the batter).  All I can say is watch this space for my next fish tasting experience!
Email Post
Labels: Botanic Gardens Chinese and Japanese Gardens flowers food job hunting museums parks and gardens photos places to visit restaurant Singapore walking wildlife
Location: Chinese Garden, Singapore