Fairies and Proper Fish and Chips

The start of the weekend meant more exploring to be done.  Friday evening brought with it our customary plans of a few drinks after work with friends, before meeting them though my fiance and I went to a bar called Divine in the Parkview Square.  The building really stands out and you can't help but notice it as it was built in an art deco style and is amazing to look at.  I understand it was originally going to be a hotel but that was not to be and it is now an office block.  What I didn't realise until recently though was that there is also a bar on the Ground floor of the building. 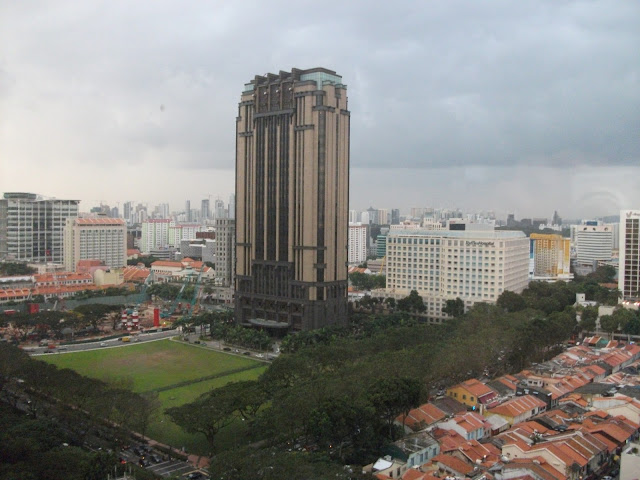 The bar is equally as impressive as the building is from the outside with its high ceilings, low lighting and amazing art deco design and features.  It really feels like you've stepped back to the 1920s.  However the really good part about the bar is the wine collection or rather the rather unique way in which the bar staff collect your chosen bottle of wine once you've selected it. 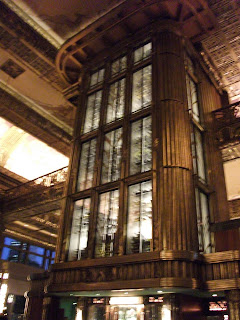 This picture shows the wine selection which as you can hopefully appreciate is fairly large and you certainly couldn't reach the wines at the top (at the bottom of this picture is the start of the regular bar).  So what do the waitresses do.....?  They attach a wire to their back and are hoisted up in the air by this to the appropriate part of the cabinet.  To make it even more quirkier the waitress, whose job it is to do that, has a pair of fairy wings attached to her back.  Unfortunately I was not able to get a picture of the waitress in action but we've already said we need to go back so hopefully I'll manage to get a picture then.

Saturday saw a trip to the Marina Bay Sands hotel a very new hotel and as you'll see from the picture below a very striking and distinctive building on the Singapore skyline.  As you can the building has three towers and then what looks like a boat straddling the top.  Up at the top there is an infinity pool (you wouldn't catch me in there) and a viewing platform looking out over Singapore. 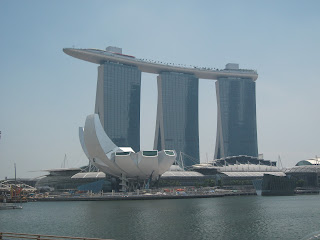 You have to pay $20 which is approximately £10 to go up to this viewing platform and although the views were good I don't think it was worth that kind of money.  You could not feasibly spend hardly anytime up there as asides from the views and getting close to the infinity pool there isn't much else to do.  All there was a snack bar type place selling hot dogs, cold drinks and a few souvenirs.  I'm not sure if we got there too early as there did appear to be a restaurant or something but this was shut and didn't look to be opening any time soon.  I think they certainly could have a bar at least up there so you could enjoy the views over a drink.  We were able to get close to the infinity pool (picture below) but only hotel guests are allowed in it so you end up feeling like you are gawping at all these people staying in the hotel as they go for their swim.  Not that relaxing for them I'm sure!  After that it was back down to the exit. 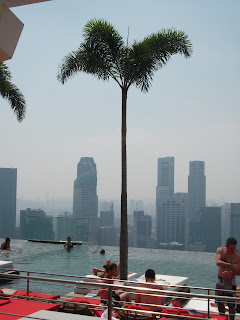 I do have to say the views over Singapore were lovely but as often is the case here it was very hazy so unfortunately we could not see that far.  However it is one to cross of the list as they say.

On the way home we noticed that a shop near us describing itself as a traditional British fish and chip shop looked to be open. (UPDATE - January 2016 Smiths Fish and Chips on Tanjong Katong Road is now closed. If you are craving your Brit style fish and chip fix they still have a branch at Balmoral Plaza, Bukit Timah Road)  It appeared a few weeks ago and we've been patiently waiting for it to open and today the shutters were up.  So that evening we took a wander down to see what they had to offer.

It turned out they weren't officially open as they still didn't have their license though they are all ready to go and hope to be open this week.  However they invited us in for a drink and we ended up spending the whole evening there.  I think we were the only people there who didn't know anyone else but that didn't matter as the shutters were up, the tables out in the front and anyone was welcome.  We got chatting to some other local expats, exchanged numbers and as a result I'm off to the cinema tomorrow with one of them.  More on that when I've been as I gather I'm going to a rather flash cinema, certainly compared to anything I've experienced before!

The business is being run by British expats, with a British chef and they plan to import cod, haddock and plaice to make it fully authentic and then another fish more geared up for the locals.  Of course we also got to sample some fish and chips that night and boy were they good!!!  I can't actually remember when I last went to a chippie but it would have been sometime before I moved out here in July and so they really hit the spot.  Needless to say we'll be heading back there again very soon I am sure.

As this is one of my most popular posts despite having been written just over a year ago now I thought I'd better update one piece of information on here.  I understand that visitors can no longer access the infinity pool area on the top of the Marina Bay Sands.  When we visited this part was still accessible to non-residents, though you could not actually use the pool.  I guess the feeling I had at the time that I was slightly intruding on the guests has made them decide to close off this area and respect guests privacy.  Regardless it is probably time that I paid another visit here to see what has changed in the interim period.
Email Post
Labels: drinking food Katong Marina Bay Marina Bay Sands photos places to visit Singapore