Before our trip I struggled to find this place in any of the guidebooks we have and having now been there I suspect it would not be on the casual tourist's itinerary whilst in Singapore. 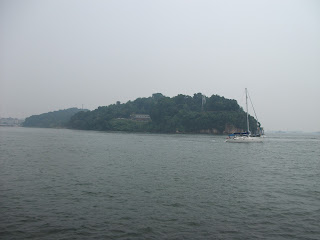 When we visited the reserve it was surprisingly quiet, peaceful and relatively empty, we seemed to be virtually the only people there.  As there isn't much there I can't imagine it ever being full of tourists and locals but that made it pleasant for a relaxing afternoon.

The reserve has several relics left from the Second World War as it is right by the coast and was used as part of the coastal defences of Singapore both during that  specific period of history (though Singapore was not invaded via the sea as it turned out) and before that.  As it had been identified as an ideal defence site to protect the entrance to the harbours of Singapore. 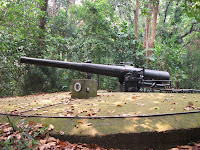 It is no longer used for that purpose and has subsequently become a designated nature reserve to protect the plants, wildlife and the rocky shore line there.  Although we were able to see the remains of the fort that was on the site I understand there are also some tunnels which can be explored.  Unfortunately though they are currently closed for renovation so we could not go into them.  The picture below taken through a gap in a metal gate is the closest I got.

It seemed that as well as the tunnels being closed a lot of the restaurants etc. were also shut but we eventually found a nice restaurant appropriately called The Labrador for a late lunch. Whilst there I accomplished another first ..... trying cuttle fish. As with many of the other fish dishes I've tried recently the cuttle fish was nice enough but I doubt I'll be ordering it again out of choice.

I can't say the nature reserve would necessarily be somewhere I'd be looking to return to any time soon but for a pleasant afternoon away from the hustle and bustle it certainly was worth a visit. If nothing else perhaps when they re-open the tunnels it will be worth another trip. 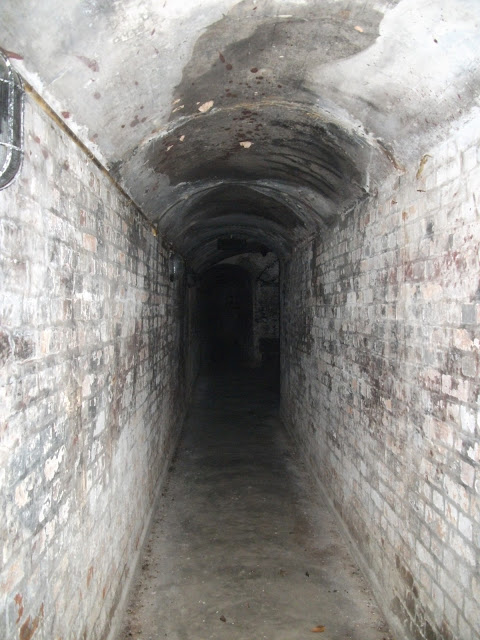