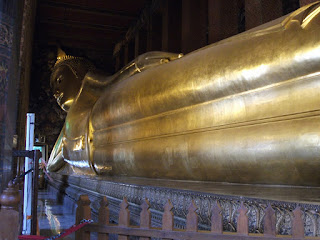 I was fortunate last week to be able to go to Bangkok for the week with my boyfriend who was going there to attend meetings and kindly let me tag along too (obviously not to the meetings)! I'd never been to Bangkok or Thailand before so had no idea what to expect but what a lovely and welcoming people the Thais truly are!

As soon as I arrived at the airport there were the obvious similarities, the heat and humidity add to that the spectacular downpours of rain and thunder and lightning and I could have been back in Singapore, but a lot more was very different. One thing I noticed was how westernised Singapore is in comparison, something that as I had nothing to compare it to I had never considered before. Singapore has a mix of cultures but there is a difference in comparison to the hustle and bustle of Bangkok and the feeling of complete bewilderment that it left me with at times. That said I had the most amazing time and hopefully will get to go back again some day.

One of the other things that struck me early on was how highly they regard the Thai royal family and their king. He is the longest reigning monarch in the world having been on the throne since 1946 and his picture and that of his wife are everywhere, on the sides of buildings, in shops even in the taxi cabs. The Thais seem very proud of the length of his reign and very very fond of him.

So what did I do and what did I see in Bangkok? I didn't do that much in the early part of the week though we went to an amazing restaurant which was up a residential street rather than a road you would expect to find a restaurant. We'd found it in a guidebook and I was on the brink of thinking we must have taken a wrong turning and should perhaps head back but it was there and it was well worth the walk with some gorgeous Thai food.

We also explored many of the temples including what would probably be classed as the main one in Bangkok the Wat Phra Kaew, the Grand Palace and the temple of the Emerald Buddha. The buildings were just amazing and conjured up all the images you have of temples in the Orient. The decoration on the temples must have taken so much patience to undertake when they were being built and the temples were the most amazing colours brilliant gold and a whole variety of colours. This was before you even got inside the temples to see the Buddha's and the amazing decorations that were inside. They truly are absolutely beautiful buildings.

When we left these temples our plan was to go to see some of the others close by but outside, as across the whole of Bangkok at the tourist points, were a number of tuk tuks with their drivers eager to take us to one of the other places for a tiny amount of money. In the end we caved in and got one, and it was so much fun. I've been on the equivalent in London but actually felt safer on the one I rode in Bangkok. It was noisy and at times as we sped past buses etc. chucking out all their exhaust fumes I did wonder how healthy an option it was but what an experience to have!

The driver had offered to take us to two places and indicated he would wait for us whilst we looked around and true to his word he did just that. We ended up at Wat Pho to see the monumental Reclining Buddha, it was huge and my photo doesn't really do it justice!

By now we decided we were a bit templed out and fancied doing something a bit different so decided on a boat trip on the numerous canals that run through Bangkok. Our hotel had told us which piers to go to to pick up one of the tourist boats but we took a wrong turning arriving at the wrong pier. However we did find some men with a boat known as a longtail boat keen to take us on a boat ride of an hour or so around the canals. I was a bit hesitant as we were the only two on the boat and there wasn't really anyone around and soon after we left we passed the pier that we should have gone to. However I need not have worried as we soon saw plenty of others doing exactly the same as us and I think we had a much better trip seeing what life for the people living by the canals is like even if we probably paid too much for it! On the trip around we passed some of the boats who go to the floating markets to sell their wares including one lady selling cold drinks, we bought some much needed drinks from her and she insisted we also buy a beer for our driver as well which we did. He later gave it back to us though so whether he didn't drink but was too polite to decline it I don't know.

The houses themselves in some cases looked pretty dilapidated and it was hard to imagine that people really lived there and that they no doubt used the canals as their main way of getting around that part of Bangkok. Generally it seemed a city of great differences between the well off areas and the less so.

Another first for me was seeing the biggest lizards I've ever seen in the wild in a public park in the middle of the city! Singapore has lizards and I know some big ones but as yet I've only seen the very small ones like you might see in Spain and other hot countries. These lizards made those ones look like ants in comparison, some of them must have been getting on for 6 feet or more and they didn't seem that bothered about being in close proximity of people in the park either. 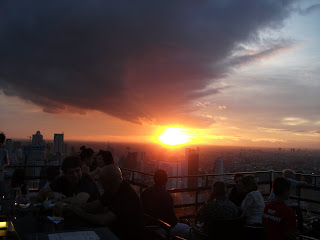 One final word has to go to the hotel we stayed in over the weekend, I fell in love with it! We got an amazing deal on the Internet and were able to stay in the lap of luxury for a pittance (I have been seriously spoilt now)! The mini bar was the best I've ever seen, we got fresh exotic fruit in our hotel room each day, our bed cover was turned down each evening and a little gift left on our pillows, it was just lovely! The hotel also had a rooftop bar on the 59th floor which gave the most amazing views of the city and the sunset and was a great way to round off each day.

All in all a fabulous trip!