Firstly big apologies for my lack of blogs but I was away in Bangkok last week without Internet access so I'm still catching up on myself. Anyway I shall come to Bangkok in due course but first I must rewind back to the weekend before I went away.

On the Saturday we ventured to an area called Holland Village on the west side of the island. This area is very popular with expats and is a very expensive area to live in. It is immediately clear that this part of the island is used to having a large number of expats living there as the Cold Storage (supermarket) had a much greater variety of foods from other parts of the world and there was a huge newsagents (the only one I've come across so far) selling a wide variety of newspapers and magazines from across the globe. On the subject of newsagents I've not noticed the equivalent here in Singapore and I really want to know where Singaporeans buy their newspapers from. Do they just get delivered or can you go out in the morning to buy your daily read of choice and if so where? However I've also had problems trying to find a bog standard card shop with a good selection in it and I can't believe there aren't any here so it is probably me not looking in the right places!

We went for a wander around and had a lunch in a Thai equivalent of a fast food restaurant and, I'm ashamed to admit it, I used chopsticks for the first time in my life! I know that's terrible but I've always managed to avoid them or get a fork instead. I'm sure I could have done the same here and got my fork but I decided I should attempt the chopsticks and I didn't do too badly for a first go. Admittedly I had noodles with chicken so the noodles could be scooped up and the chicken was in fairly large pieces but I managed to eat it without it going cold and us sitting there all afternoon whilst I played with my food......

We then went for a couple of Saturday afternoon drinks and although lovely it was very clear just how popular this area is with expats. The bar we were in was full of them and barely a local was in there. That said though it was a very pleasant afternoon but I think I prefer to live where we do right in the mix of both expats and locals.

On the Sunday we went for a walk to East Coast Park just a stone's throw from our flat. East Coast Park is, as the name suggests, on the east coast of the island and is a massive park right on the seafront. It's a popular place to visit as there is usually a breeze so you can find some welcome relief from the heat and you feel a million miles away from the hustle and bustle of the more built up parts of the island. The park is actually on completely reclaimed land (of which there is a lot in Singapore) and it is a place where you can have a BBQ, hire a bike or Rollerblades or simply just go for a walk.

Before we got to the park though we went for a walk around the area near where we live called Joo Chiat. This area gets its name from a famous Peranakan (who I have mentioned and explained what this means before) family. The walk took us past many shophouses decorated in the traditional Peranakan style as the picture below shows and conveniently ended at the East Coast Park where we were able to take a much needed refreshment break! 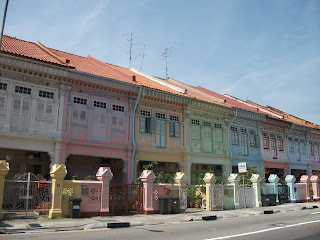 Whilst enjoying our refreshments at one of the restaurants I made a discovery that in my limited time here in Singapore and Asia was completely new to me! In the ladies toilets in one of the cubicles there was nothing more than a hole in the ground, there was a flush but just this hole. On consulting my boyfriend, who has not only been here longer than me but also other parts of Asia as well I gather this is common and is a toilet as well but just well more basic! Not that I want to dwell on such things but I did find it bizarrely fascinating and, as is the purpose of my blog, something else to share with all of you.