Despite being here over a month until Saturday I'd not been to Orchard Road for what I could term the main reason everyone goes there, i.e shopping!  I'd been to a couple of bars in the area and walked down the road a couple of times but never truly ventured into any of the malls.

For anyone who doesn't know Orchard Road is the main shopping road in Singapore.  Singapore is full of shopping malls but this is the place to go and shop!  The area in the 19th century was (as the name suggests) an orchard lined with nutmeg and pepper plantations.  Having since bought a fascinating book about Singapore's history with lots of very old photos including ones of this area it is very hard to imagine that now!

Before I delve further into the delights of Orchard Road I must share with you an interesting incident from a couple of nights beforehand.  My boyfriend and I went out for a few drinks and a meal with a couple of friends.  For drinks we went to a bar in one of the main hotels in the city centre (Swissotel, The Stamford) which is on one of the top floors and has amazing view across the city and out towards the sea.  We went just before sunset so got to see the city both in the day light (and fortunately it was a wonderfully clear day) and after dark.  From the bar and as it was so clear we could see the hills in Malaysia as well as a number of familiar Singapore landmarks.  This hotel is very close to Raffles Hotel and you can see right down in to the centre of that hotel complex and see the swimming pool etc.  It was also amazing that although it seems as if Singapore is a huge metropolis just how close you actually are to parkland in the built up areas, the huge expanses of wilderness and the parts of the island that have been left to the swamps and jungles from a time long ago.

This picture is from the bar looking down on the Raffles hotel (the red roofed building) with the swimming pool in the middle of the complex. 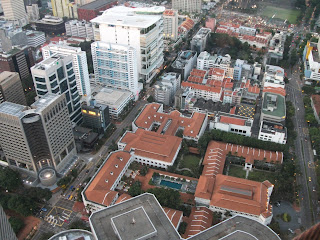 We then went to an Australian restaurant (now closed) for dinner and on the menu was a pie section and included within it a Shepherd's pie.  Having not had much in the way of what I would deem good old English food lately I got a real taste for that so ordered it.  When it came it was lovely but wasn't quite what I was expecting.  The shepherd's pie was as it should be though the mashed potato did seem rather pureed but it came in a hard pie crust.  There was no top to the pie crust but the shepherd's pie was served in this hard crust.  As I said it was very nice but it did make me smile.  I guess the concept of something being called a pie without it having to be served in a pastry base hasn't travelled!!

Back to Orchard Road though, the malls truly are amazing and a shopping addicts idea of paradise.  Now I have had an initial explore I'm keen to go back and look further and yes I did buy some clothes......  I'd like to buy something (I'm not sure what) to remind me of my time here and that is typically Asian that I can keep. There are a number of antique shops specialising in these types of goods which I might discover are way out of my price league but it would be good to go and look to see if I can find anything I like which doesn't break the bank!  In addition the first Youth Olympic Games is being hosted by Singapore (the opening ceremony was on Saturday evening).  At the moment there are some temporary shops on Orchard Road selling all sorts of official merchandise so we bought a couple of mugs to celebrate the Olympics coming to the city.

For lunch we went to an Irish pub just off Orchard Road (yes there are many Irish pubs over the city) called Dubliners.  Although it is so close to the hustle and bustle of Orchard Road you do feel like you have stepped away from that frenzy and the food is excellent.  I had an Irish fry up and compared to the one I had last Sunday in another restaurant this wins so far as the most authentic fry up I've found and I'd definitely eat it again!  This pub is actually housed in an old colonial building which conjures up images of another time here.  We sat on the front veranda and it was a lovely way to spend a Saturday lunch time.

Another sight on Orchard Road is the Istana Negara Singapura.  This is the residence of the president of Singapore and is housed in vast grounds in a prime spot in the centre of Orchard Road.  It was built in 1869 and was originally the official residence of Singapore's British governors and on Singapore's independence became the president's residence.  The building is only open to the public a few days each year (the day we went not being one of them) and is heavily guarded to prevent anyone entering at other times.

As I've already mentioned the first ever Youth Olympic Games are being hosted by Singapore and the opening ceremony was held on Saturday evening.  We watched it on TV and it really was a great occasion culminating in fireworks and the lighting of the Olympic flame (which I've since seen).  It will be interesting to see if team GB win any medals - fingers crossed for them!
Email Post
Labels: festivals and events food Istana Orchard Road photos places to visit Raffles City Raffles Hotel restaurant shopping Singapore sport Youth Olympic Games