Sunday saw a trip to Little India a place I visited when I came here in January but which my boyfriend had only experienced through eating in one of the many Indian restaurants and watching football at a couple of the pubs there.  So we decided a trip and walk around the area so he could see more of it what would be a nice way to spend the day.

The roots of this area date back to the first half of the 19th century when brick kilns and cattle farms were established there.  The area drew lots of Indian immigrants in search of work and by the 1880s the area was a thriving Indian community.

It is full of shops and stalls selling all manner of goods including fruit and vegetables, gold, electric goods, CD's and combines with the smell of various herbs, spices and flowers and is fascinating to visit and wander around. 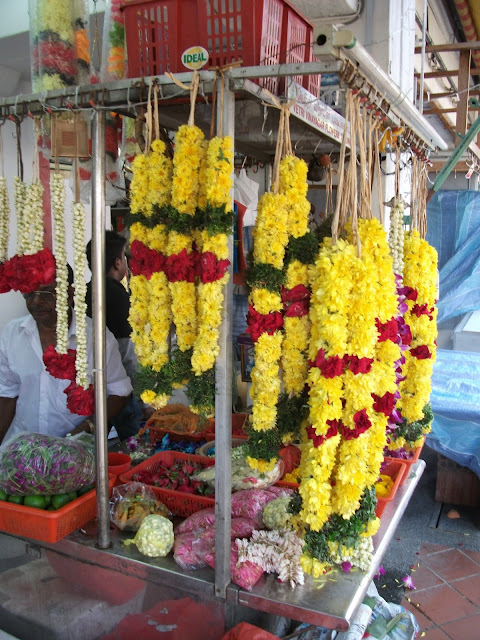 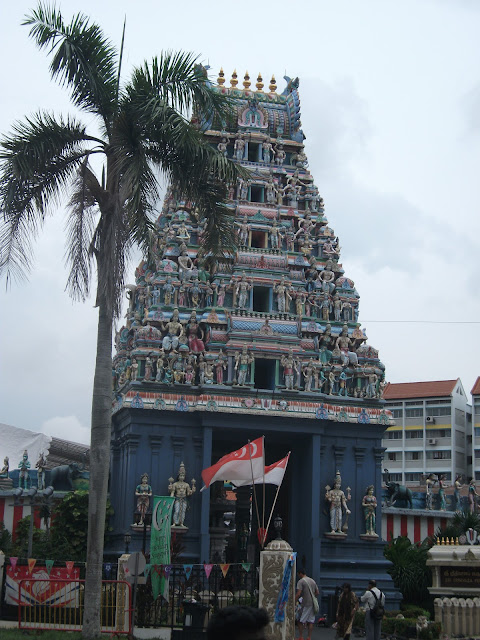 One of the guidebooks we bought when my boyfriend first moved out here includes a number of walks around different areas of the island.  There is one covering Little India so we decided to follow that and see the main sights.  The walk took us past some amazing looking temples including the Thai influenced Sakaya Muni Buddha Gaya temple known as the temple of 1000 Lights and the Leong San See temple. 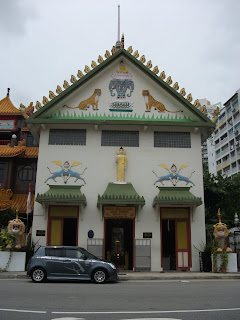 The Sakaya Muni Buddha Gaya temple (left) was founded by a Thai monk in 1927.  It houses a 15m high, 300 tonne Buddha.  The yellow tigers flanking the entrance symbolise protection and vitality.

The Leong San See temple (below) is a Taoist place of worship dating from 1917.  The name translates as Dragon Mountain temple.

The walk also took us past some of the traditional shophouses, one of the last of the island's spice-grinding shops, fortune tellers and a shopping mall called the Mustafa centre where you can buy electrical goods and so on.  We were also taken around a number of roads with names inspiring thoughts of imperial India such as Clive, Hastings and Campbell but the shops on these roads are fascinating.

The walk took us round one very fascinating market called the Sungei Road Thieves market.  The items on sale here are a bizarre jumble of things that I assume the people selling have acquired and want to sell to make some money.  Amongst the things on offer were countless chargers for mobiles and other things, old remote controls, mugs, clothing and so on.  I did notice one man selling stamps so maybe in amongst all the goods on offer if you are prepared to look you can find some real gems. 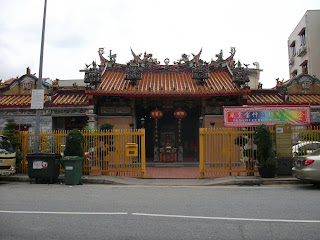 We rounded off the walk with a stop in a bar / cafe for a drink.  A good place to stop and I'd definitely go again though the Country and Western music being played seemed a bit out of place.

Before heading home we decided a couple more drinks were in order and firstly went to Raffles hotel and the Long Bar.  I've been before and so decided this time to have a glass of wine rather than a Singapore Sling (maybe another time).  I managed to have a glass of rose which is something you don't seem to find that often here so that made a pleasant change.  The bar was full of people who had obviously all decided this was the place to go for a drink on a Sunday afternoon and I suspect very few of them were actually staying at the hotel.  However it is a must do on a visit to Singapore.

Finally our last drink was in a bar in a place called Chijmes which has a number of bars and restaurants in it.  The building was originally a convent (the Convent of the Holy Infant Jesus) and it is now a really lovely place to go for a drink or something to eat or to browse around some of the shops there.  The complex dates from 1854 and was founded by four French nuns who had arrived in Singapore from Penang.  After a drink and something to eat we headed home, I was exhausted after our walk and couldn't wait to go to bed!!
Email Post
Labels: Chijmes food Little India photos places to visit Raffles Hotel shophouses shopping Singapore Singapore Sling temples walking
Location: Little India, Singapore