The final stop on our whirlwind tour of Vietnam was in Ho Chi Minh City in the south of Vietnam. Ho Chi Minh, formerly know as Saigon, is the largest city in Vietnam and is just crazily busy! When known as Saigon it was firstly the capital of the French colony of Cochinchina and later of the independent republic of Vietnam. On the 2 July 1976 the city was officially renamed Ho Chi Minh City but Saigon is still widely used unofficially.

After taking a delayed flight from Hanoi we finally arrived there in the early hours of the morning, checked into our hotel and collapsed straight into bed. Next morning, and despite the late night, we were up early, had breakfast and were ready to explore the city. First place, the incredibly grand looking Ho Chi Minh Central Post Office. As you may guess from my photo below the building was built when Vietnam was part of French Indochina and is heavily influenced by Gothic, Renaissance and French as a result. It was built between 1886 and 1891 and can count Gustave Eiffel (yes him of Eiffel Tower fame) as one of its architects. The inside of the Post Office is ornately decorated with a high arched ceiling, old maps of the area painted on the walls, wood paneling and clocks showing the times of various cities around the world.


From the Post Office we moved on to the nearby Notre Dame cathedral otherwise known as the Saigon Notre-Dame Basilica. It too was established whilst Vietnam was a French colony and was constructed between 1863 and 1880. All the original building materials were imported from France. It's a quite stunning building and, just like the cathedral in Hanoi, is not surprisingly very reminiscent of European church architecture. Despite the crowds outside inside was calm and peaceful and quite lovely to wander around.

We only had one full day in Ho Chi Minh but certainly packed a lot in! Next stop was the Saigon Skydeck in the Bitexco Financial Tower to get an aerial view over the city. Whilst perhaps not an iconic view or skyline it was nonetheless great to get an idea of the scale of the city stretching out before us. The viewing level is on the 49th floor and offers completely panoramic views, letting you see the busy streets and junctions below and right along the busy river too. Inside the skydeck there is also a restaurant and cafe which we popped into for a drink, although the service was slow the views were again good.

After lunch (more on that soon) and a bit of a rest back in our hotel we headed out in the evening for a few drinks with a sunset view. For our view we headed to a bar called Saigon Saigon in the Caravelle hotel. My husband had actually been here on previous work visits to Ho Chi Minh and suggested this would be a good spot to hopefully see a good sunset on our final night in Vietnam. According to the hotel's website the bar has been open since 1959 and was a popular spot for journalists in the 1960s when it was the highest spot in the city. We got there early and managed to grab ourselves a good place outside. Unfortunately the sunset was not as impressive as some my husband has seen previously but the cloudy sky still looked beautiful as the sun went down. As the city lights came on the city took on a different vibe with the streets thronging below us as we sipped on our drinks and looked back over our holiday. 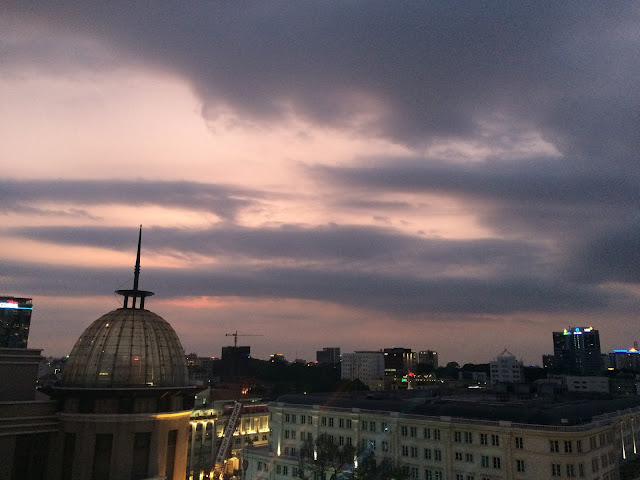 On our way back to the hotel the last sight of the night was the fabulous looking Ho Chi Minh city hall lit up. The building was built between 1902 and 1908 in the French colonial style. It really did look wonderful and is certainly one of the night time spots to photograph from the number of people milling around doing exactly the same as us.

The next morning, our final in Vietnam, we had some time to fill and decided to visit Ho Chi Minh's botanic gardens. These gardens are clearly a very popular weekend spot for locals as the place was heaving even though we were there pretty early! Like Hanoi's botanic gardens you have to pay to get in but what we hadn't fully realised was that there was also a zoo of sorts there, I was actually surprised by how many animals there were there. Our travel guide suggested it was being closed and the animals relocated but this didn't look to be the case from our visit. Having dug around a bit more there seems to be a clear divide between those who think it's a great zoo and those who feel the animals need new homes. Personally I didn't rate it and felt the animals generally looked pretty sorry for themselves and looked to be living in less than ideal conditions. When the crocodiles are swimming in water that has rubbish floating in it that people have clearly thrown in rather than find a rubbish bin and it hasn't been removed I think you can get the general idea.

The rest of the gardens were pleasant enough but not spectacular though everywhere was crazy busy in them. There were a few greenhouse type buildings but all seemed to be padlocked, my photo below being just one of those we could look through the gates into. It seemed a bit of a shame that you couldn't go in them to view the plants growing inside. 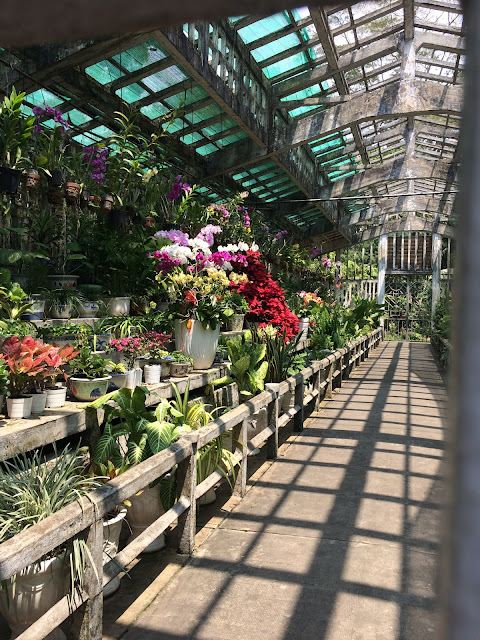 After leaving the gardens we headed for a very good lunch and then it was time to head to the airport and return to Singapore. We had a great week in Vietnam packing a crazy amount of things in. I think personally I preferred Hanoi to Ho Chi Minh but maybe that was because we spent longer there and I had more chance to see the city. Halong Bay was altogether different and just simply beautiful. Overall definitely a country to return to some day if I can.

If you want to read about what we did in Hanoi and Halong Bay check out mine (and my husband's) posts here,

Hanoi - a Mausoleum, a Palace an a Museum