Having written about all the marvellous food we ate whilst in Hanoi here's another post from my husband about the food we ate in Ho Chi Minh City on our whistle stop visit. You can follow him on Twitter at @asksirstamford


After our very late arrival on Friday night (much later than planned) and a morning of exploring, for Saturday lunch we visited Nha Hang Ngon. This is another branch of the chain we visited on our first night in Hanoi. It was again a series of hawker type stalls serving a variety of local dishes, different from Hanoi though 1000 miles to the north, with the dishes typically being spicier than their northern cousins. We chose fresh spring rolls (called salad rolls here in the south), differing from the northern version in that the peanut sauce had chili in it. We also had a dried beef and green papaya salad which was fresh and a little spiced. The owner of this blog chose chicken skewers, whilst I ordered the chili squid, served with a little tomato salad. The restaurant is in District One, near the Reunification Palace, the Ho Chi Minh Museum and the War Museum (I'm afraid I'm not in the slightest bit interested in the war so visited none of that). We had made our way to lunch after visiting the rooftop bar of the Rex Hotel, with its kitsch dancing elephants. This was the site of the Americans Five O’clock Follies, where war time propaganda was disseminated in the 1960s and 1970s and from where the last defeated American helicopter left from. Before that we'd been to the observation Saigon skydeck of the Bitexco Financial Tower that gave us a bird’s eye view of the city from on high. 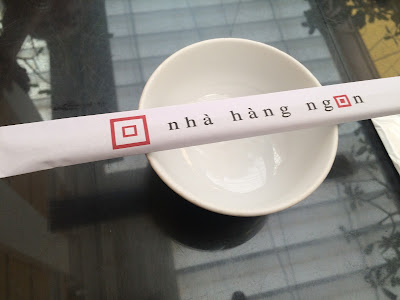 For dinner we decided to try a restaurant that was recommended / mentioned in the Lonely Planet guide and also had reasonable Trip Advisor reviews, although the one saying it was full of ‘merchant bankers’ also did put us off slightly. The place was called the Temple Club (so named as it was opposite a Hindu temple), down a side road in District One and was again located in a former colonial villa. The upstairs dining room was exquisitely decorated with spiritual artefact's, such as fresco's, wooden plaques and statues of the Buddha etc., which complimented the extensive menu, all menus in Vietnam seemed to be enormous with far too much choice. We order a tasting platter to start and a couple of main dishes and a bottle of Chilean wine. The Temple Platter contained four key elements, including fresh and fried spring rolls (again), rolled beef and a salad roll. The highlight of the meal was the caramel pork hotpot, which was pork covered in sickly sweet sauce which was accompanied with special fried rice (with small prawns) and a chili chicken dish. All the food was great and the atmosphere lovely. The night was rounded off with a Saigon Beer in our hotel bar.

The next day, after a rather warm morning wander around the Botanical and Zoological Gardens (it was hot and the animals were caged in appalling conditions) we decided over coffee to take up another recommendation (from our friend who writes the great blog, A British Girl Abroad) and go to Cuc Gach Quan restaurant. This is also allegedly in District One by taxi but it was in the back of beyond and would never be found without local help. The restaurant is down a backstreet, again in what was termed as a French villa and again had an overly extensive menu (described as what a local family would typically eat). With help from the excellent waiter we chose a number of dishes and had to assure him that I was very very hungry as we ordered many dishes (he probably thought that I was a big fat pig).

As usual we had fresh and fried spring rolls, and again these were very good. I love the contrast one gets from the fresh ones against the crunch of the fried example. Alongside this we had a bacon and lemongrass small dish, which was deep fried lardons of pork in a spicy chili and lemongrass dressing, a chicken, chili salt dish with boiled chicken bones with associated flesh to be dipped in a salt, chili and lime mixture with a portion of fried rice and Vietnamese sauteed vegetables. Being a greedy glutton I also ordered a fish hotpot, which was deliciously spicy but a little fiddly with the bones, it did however compliment the rice perfectly. The restaurant was excellent and up there with the best we went to all week, I’d certainly recommend it and may return next time I travel to Saigon for work. 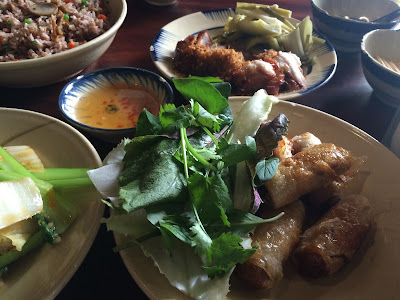 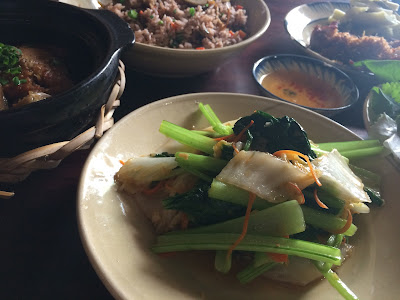 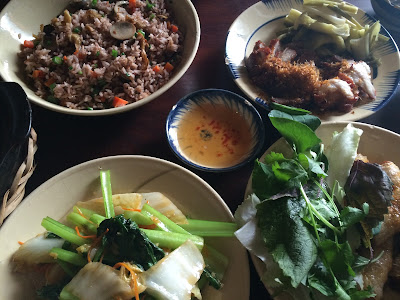 The week was rounded off with a pint or two in a branch of Brotzeit, above the Hard Rock Cafe, and next to the Intercontinental Hotel, this is a great hotel to stay at having stayed there previously for work. As is the one we selected for our brief stay, the Sofitel Saigon Plaza.

Both Hanoi and Ho Chi Minh City offered a huge variety of different and delicious dishes. We did not have anything disappointing, but then I never really expected us to either. I can't wait to return!