So after a fabulous few days in Hanoi we left bright and early on an approximately three hour minibus ride for our next stop, Halong Bay. The beauty of this journey being that we got to see a little of the Vietnamese countryside and some small towns on our way. I was told beforehand that Vietnam has the most amazing different shades of green throughout its countryside and I wasn't disappointed. The colours were stunning, so vivid and yes so many different shades, just beautiful.

As we left Hanoi behind us our journey took us past paddy field after paddy field many being lovingly tended by workers and all of them a beautiful, lush green. It was interesting to observe that many of them had a corner with graves in complete with, in some cases, simply huge grave stones. It is a tradition in the north of Vietnam for people to be buried in the piece of land where they lived so therefore not uncommon to see the graves in the paddy fields. I had already noticed in Hanoi too and, this continued on our journey to Halong Bay, that most of the buildings we passed were built in a tall, narrow way, often with large balconies at the front and on many occasion looked just a little precarious. This style also seemed quite common when we got to Ho Chi Minh as well, quite different from what I'm used to seeing. If you want to see what I mean check out this link for a photo of a very typical tall, narrow Vietnamese building.

As we got closer to our destination the weather gradually began to change and whilst it wasn't cold the air became damper and on a few occasions just a little drizzly. The weather stayed like this for much of our two day stay and whilst it would have been fantastic to get a spectacular sunrise or sunset it was nice to get this cooler, fresher weather just for a while to give us a small break from Singapore's pretty consistent hot and humid weather. The journey there took us through several different provinces and past the Pha Lai power station, the largest coal fired power plant in Vietnam. Finally, though we arrived at Halong city and it was time to board our boat at the pier and begin our mini cruise. 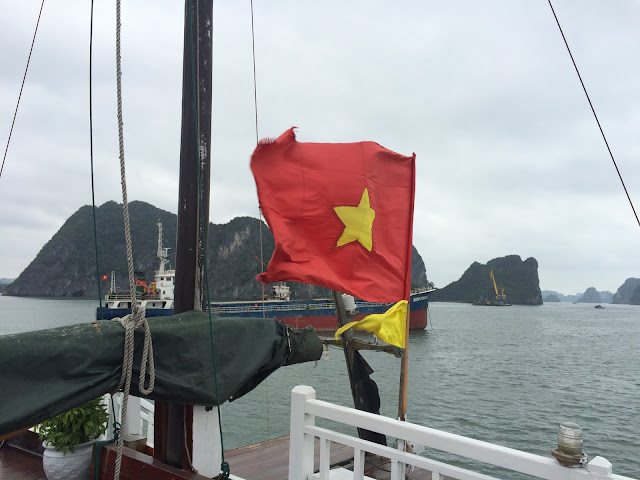 Halong Bay which literally means 'where the dragon descends into the sea' is a UNESCO World Heritage Site made up of over 3000 islands in various sizes and shapes. Legend says that the islands of Halong Bay were created by a dragon that lived in the mountains. As the dragon ran towards the coast his tail gouged out valleys and crevasses and as he plunged into the sea the areas dug up by his tail became filled with water leaving just the very highest land visible.

Upon setting sail we were able to enjoy a delicious lunch of various local dishes whilst enjoying the views as we sailed further out into Halong Bay. There were about twenty of us on the boat so, whilst we could chat to our fellow passengers if we wanted we also had plenty of opportunity to enjoy our own space as well. In fact on many occasions we were practically the only ones up on board the outside deck. Though this may have been partly due to the drizzly weather which, as I said before, we thoroughly enjoyed! 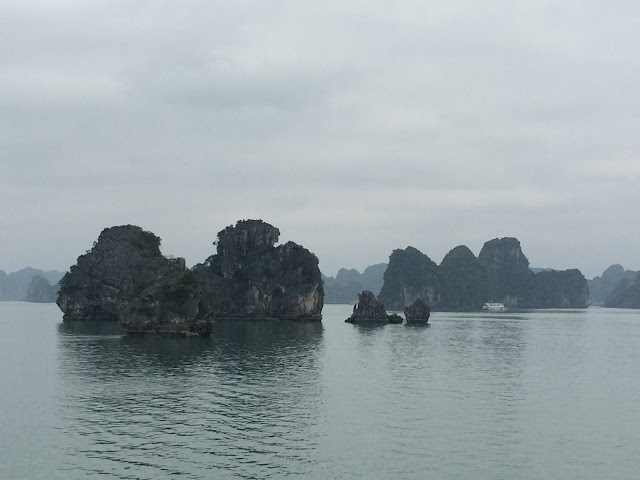 Views sailing out into Halong Bay 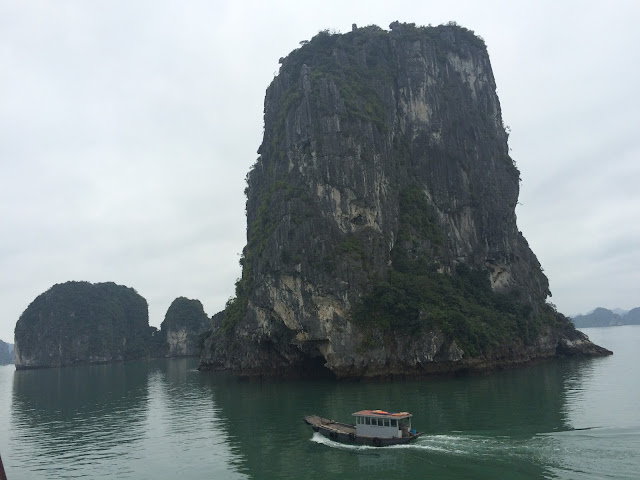 After lunch first on our itinerary was a visit to the Cua Van floating fishing village. Cua Van is the largest of a number of floating villages in the area with about 130 floating houses and a population of around 600. Leaving our boat we got taken in a small bamboo boat by one of the village residents around the village for a closer view of their homes and way of life. The village is located beneath a number of tall mountainous islands which gives them some protection during typhoon season. This village is quite unique as it is the only one with a primary school and a clinic which are also floating in case you were wondering.

It was a quite fascinating place to visit and to see all the normality of life with washing hanging out to dry etc. but all done on the water rather than on dry land. It was incredibly peaceful too. At the end of our visit we got taken to the place where all their fishing catches come which also includes a small visitor centre telling you a little more about these unique communities and the work being done to ensure the environment is protected and the villagers can remain living here as they wish to. 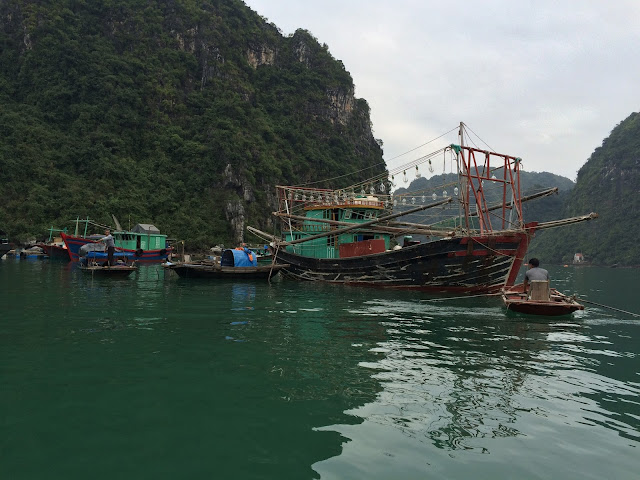 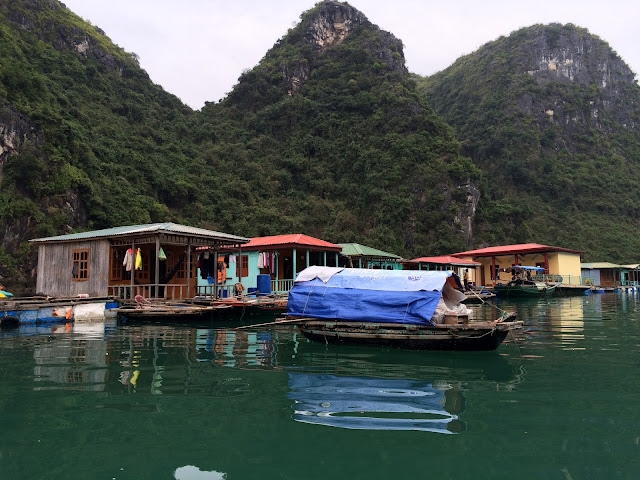 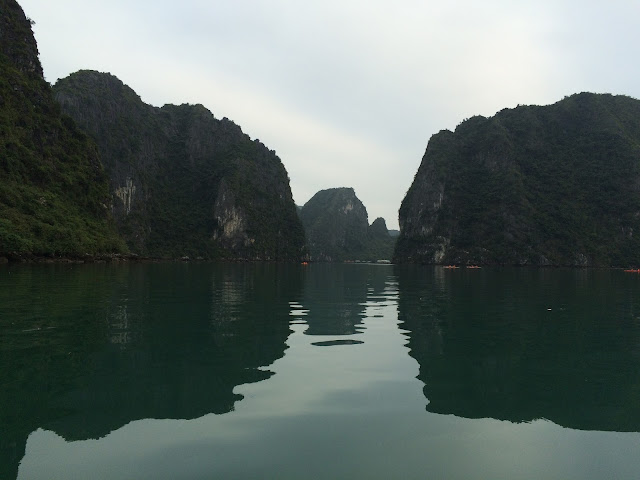 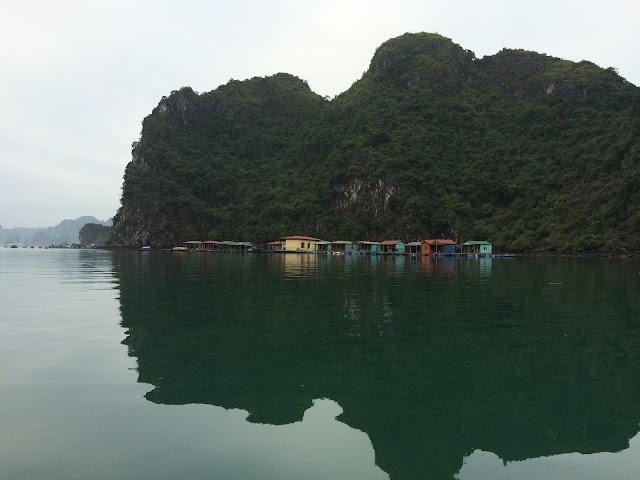 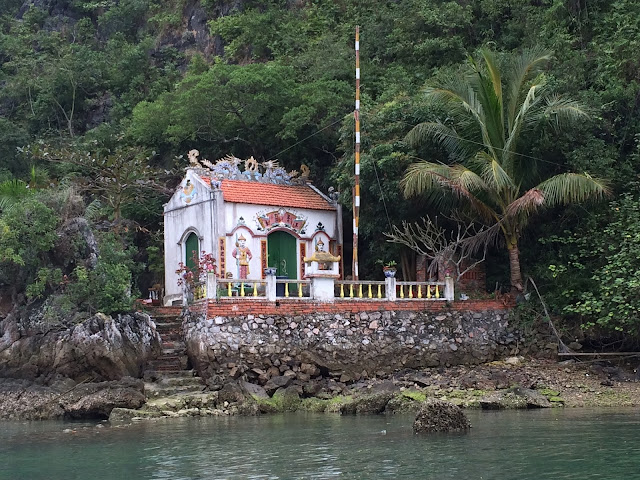 From the village we returned to our boat to spend the evening on board, enjoying more food, some drinks (including two happy hours) and just simply enjoying a peaceful evening away from the connected world. Our boat did offer wifi but, as you'd expect, it was a bit sketchy so it really was all about just enjoying the moment. We also got to try our hand at some late night squid fishing off the side of our boat. Which included a beginners luck moment for me as I actually managed to catch one! After posing for photos the squid was promptly returned to the sea and proceeded to show his disgust by squirting ink out in the water.

As I mentioned we unfortunately didn't get any spectacular sunsets, but watching darkness fall over us and the other boats moored nearby in amongst the beautiful rocks of Halong Bay was simply stunning. 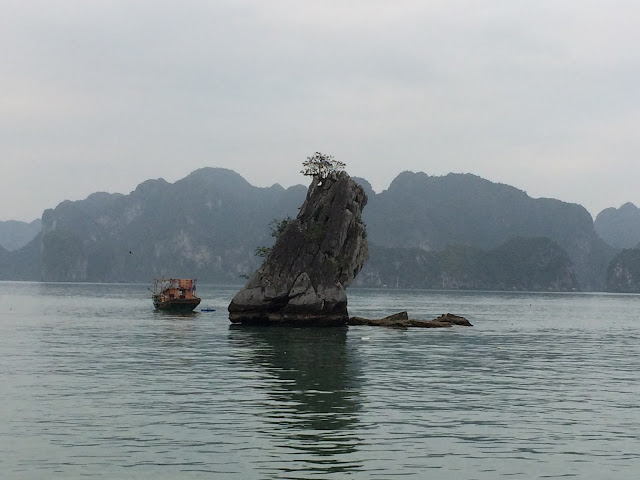 The next morning and after a very good night's sleep we were up bright and early, I'm talking well before 7am for coffee and delicious pastries. We then had the opportunity to take part in a Tai Chi class up on the outside deck. Of course we joined in, it was fun and kept nice and simple as I suspect none of us joining in were hugely proficient. The morning began as the day before with mists covering the tops of the rocks and just a light drizzle. It really was a spectacular backdrop to our class.

After that we were off on another visit to the nearby Titop island. Titop island was named after Gherman Titov, a Russian cosmonaut. If you look at my photo of the island below you can see a structure right at the very top. The main thing to do here is climb the many steps to the top and this viewing platform. Something we did and despite the relatively cool weather we still managed to get incredibly warm! The views from the top are quite beautiful, even with the misty conditions that day. It is well worth doing the climb and is relatively easy, thanks to the steps going all the way to the top.

After coming back down again there was a chance to go swimming, we opted just to go paddling as the water was very cold. Though we did see a few brave or crazy (you decide) people going out into the water. After dipping our toes into the water we just enjoyed sitting on the beach despite it raining just a little more heavily by that point.

Heading back to our boat once more we enjoyed a delicious breakfast, something I think we were all ready for after our early morning of Tai Chi and climbing rocks. Then it was time to head back to Halong city and back to dry land once more.

Halong Bay truly was beautiful and definitely up there as one of the best places I've had the opportunity to visit since living in Singapore. We visited in February and whilst the weather may not have been amazing for us it was a delightful change. It also wasn't cold at all, in my opinion. It was fairly busy but I think visiting then it was quieter then it would be at peak season so for us it was definitely the best time to go. Certainly somewhere to return to one day if I have the chance.
Email Post
Labels: beach Halong Bay photos places to visit things to see travel unusual ways to travel Vietnam weather
Location: Ha Long Bay, Hạ Long, tp. Hạ Long, Quảng Ninh Province, Vietnam