Lion Dances in the Lion City

I had to wait just over two and a half years for it, but finally this Lunar New Year period I've managed to actually see some of the lion dances, rather than just hearing the drumming.  In fact at the latest count I've gone from seeing none to seeing five, two on the same day!

Anyone living in Singapore and reading this is probably wondering how I've never seen one as they really are everywhere over the new year period.  I'm not sure how either but even when I've heard the drumming I've never been able to track down the dance or it's simply been a truck driving by en route to another performance.  This year it all kicked off for me on Chinese New Year Eve with two on the same road (Joo Chiat Road), just around the corner from where we live and since then I've seen them on Orchard Road (I was hoping now I work there I might be lucky), near Chinatown and in Little India.


The lion dance is a form of traditional dance in Chinese culture with performers mimicking a lion's movements whilst dressed in a lion's costume.  The lion dance is accompanied by music played on drums, cymbals and gongs.  During the Lunar New Year period the lion dancers visit the businesses of the Chinese community to perform their dance.  The lion will also usually eat lettuce or mandarins as part of the dance, in Chinese these have names which sound similar to words that have an auspicious meaning and that will bring good fortune for the new year.

I can't pretend that I haven't been very excited by all the lion dances I've managed to see this year particularly as I had to wait so long to actually see one.  When I've heard that characteristic drumming that accompanies a dance I've had to go and try and find it just in case it meant I got to see another one.  I'm not sure I'll ever tire of watching these performers and dances and hope I get to see plenty more! 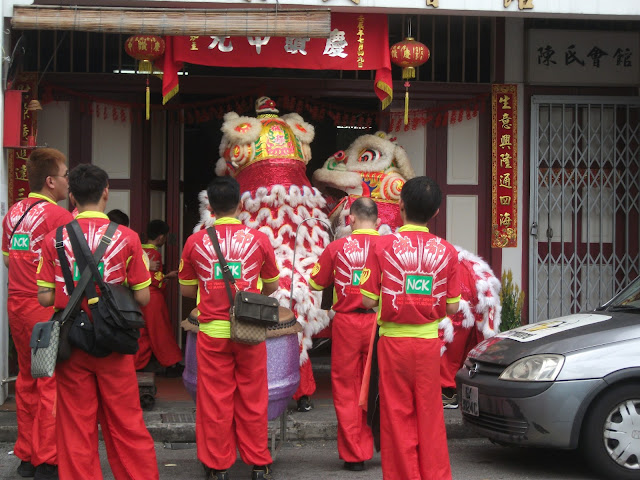