With our base being in the Costa del Sol and with access to a hire car it meant we could explore some of the region beyond just our immediate location.  For one of our trips we paid a visit to the beautiful historical city of Ronda.

Ronda is one of the oldest cities in Spain dating back to prehistoric times and is stunning, as the old part of the city is situated on a rocky ledge.  The current Ronda's origins date from Roman times when it was an important commercial area.  Ronda also has a lot of Islamic architectural heritage thanks to the Moorish influence on much of this part of Spain.

As well as being well known for its historical beauty Ronda is particularly famous for its bullring which dates from the 18th century and for the New Bridge.  The latest bridge being built in 1793, is not really that new any more, but is a remarkable piece of architecture spanning the valley below Ronda.


Before heading to the old part of the city we visited the famous Bullring.  I'm not a fan of bull fighting and would never want to go and see one but the ring and the history of it is very much a part of what this city is famous for and is a big tourist draw.

The Bullring was built at the end of the 18th century, with the first fight taking place in 1785.  As you can see from the photo below the views over the surrounding mountains and countryside from the Bullring really were very impressive.  I have to admit to appreciating the open spaces all the more for the complete contrast it provided to Singapore.

Until I visited I had no real idea (or given any thought to) how big a Bullring is but this one, at least, seemed huge and just a little intimidating as you walked out into it.  As well as being able to walk in the Bullring there was also a bull fighting museum and a collection of harnesses and livery from the Royal House of Orleans.  These were used on the carriages of the Duke of Montpensier, one of the sons of King Louis Phillippe of France who lived in Andalucia from 1846.  The museum gives an insight into the history of bullfighting and is also home to some beautiful matador costumes, paintings, engravings and a collection of original posters announcing bullfights.


We also saw the antique fire-arms collection which included pieces from various Royal armouries in Europe, as well as hunting and duelling pistols.  Finally our tour took us to something which, for me at least, was a bit more interesting then the armouries, the School of Equestrianism.  When we visited there was sadly no riding taking place but the school teaches and trains riders in classic horse riding and if you visit at the right time you can watch the daily schooling of horse and rider. 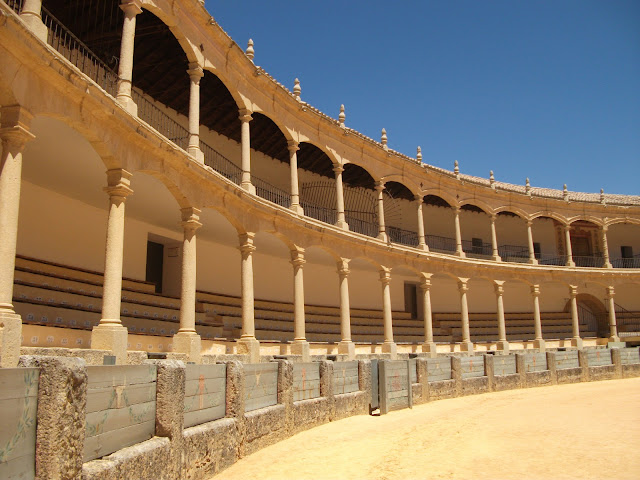 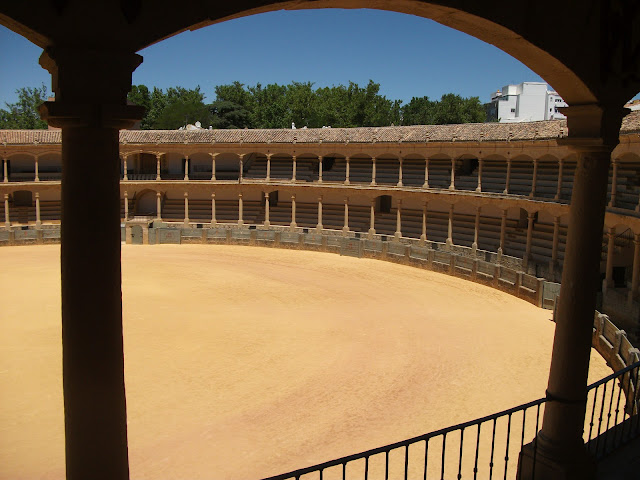 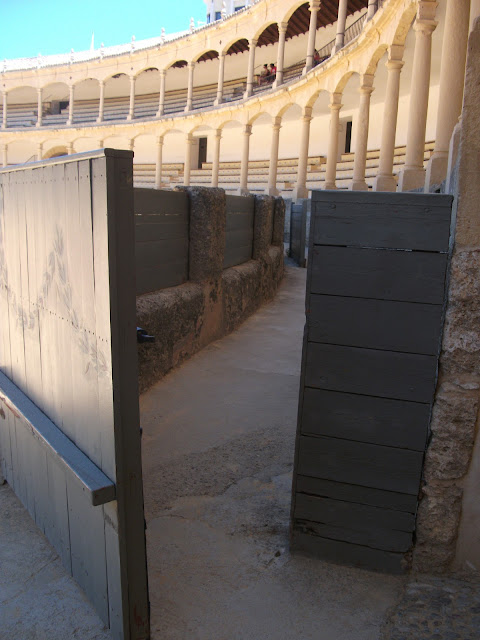 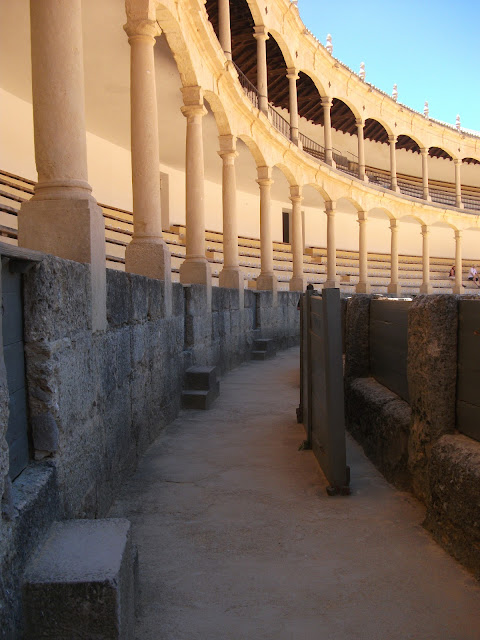 By the time we left the Bullring and museum I think we were all pretty exhausted as it was a blisteringly hot day and there was not a lot of shelter in the outside parts of the complex.  However as I mentioned Ronda is also known for its beautiful old city and fortunately the Bullring is located just a short walk from that.

I have to say I'm glad we made the effort to visit that too and if I ever return, having now visited the Bullring, I'd like to concentrate on exploring more of the old city that we did not see.  To enter the old part of the city we walked across the New Bridge which spans the deepest part of the gorge of Ronda over the River Guadalevin.  There has been a bridge there since the 16th century though this one dates from 1793.  The room that you can see on the bridge in the photo below (where the window is) was once used as a prison.

As I said we were tired by this point and consequently only saw a small part of the old city but what we did was full of beautiful buildings, narrow streets and quiet courtyards with peaceful cafes to dream away a hot summer's day.  It's a really lovely place and somewhere I hope to return to again someday.