The ArtScience museum is currently playing host to 'Harry Potter: The Exhibition' and if you are a fan and haven't yet been I think you'll definitely want to go along and see it.  The exhibition has travelled to various locations around the world including New York and Sydney and will continue on its world tour once it leaves Singapore at the end of this month. 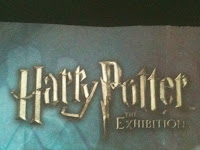 We were a bit late in going if I'm honest (it's been here since June) and I'd already heard lots about it from others.  The consensus though seemed to be that it was worth it if you were a fan of the books.  I've read the books, seen the films and enjoyed them all so figured I'd enjoy this too.

As you'd probably expect the exhibition gives you the chance to see all sorts of Harry Potter items from all the films.  Of course a lot of it is the actual costumes worn by various characters, but not just all the obvious ones.  There are many costumes of characters who only featured in one of the films, luckily the displays tell you which one it was rather than you having to remember.  Seeing some of Hermione's costumes from the more recent films though certainly confirmed how tiny Emma Watson must be!  There is a strict no photography policy in the exhibition itself though, so even more reason to go and see it yourself.

As well as costumes there are various props and models from the films, displayed in recreations of many of the key locations in the films.  There are also the models created and used in the films for characters such as Buckbeak and Kreacher the house elf amongst others.  They even have models of the food used in some of the sumptuous feasts held in the Great Hall on display (it looked good enough to eat).

There are some hands on parts to the exhibition too, including the opportunity to pull a mandrake and sit in one of Hagrid's huge chairs.  Of course, there is the obligatory gift shop too with some rather cool things to buy.  This includes mugs, t-shirts and my favourite, Bertie Bott's Every Flavour Beans (in case you don't know there are some pretty yucky ones along with the more traditional flavours) as well as lots of other fun things for the die hard fans.

The exhibition's run in Singapore has almost finished, it closes on the 30 September 2012.  It's lots of fun so if you haven't been and you are a Potter fan make sure you go soon!
Email Post
Labels: ArtScience museum celebrity exhibitions Marina Bay museums photos places to visit shopping Singapore things to see
Location: Bayfront Ave, Singapore 018956