Haw Par Villa feels like a time warp and a glimpse, perhaps, at what Singapore used to be like.  Indeed even the piped music as we entered the park came from the 1950s and 1960s.  I visited in the middle of the week and apart from me and my friend Claire the only other people we saw there were a couple of ladies visiting like us and a man, who obviously worked there, sweeping around the exhibits.

Before visiting I'd heard a lot about this place, that it was a little odd, that a lot of the stories the sculptures are telling won't mean a lot unless you know the stories, as there is little in the way of signage explaining what is happening.  I agree that those comments are all valid but despite that the place is charming and captivating and somewhere I'd go back to again.

I'm not really sure how even to describe what the place is if I were asked to do so.  I've heard it described as a theme park but then it does not really fit with my notion of what that is as there are no rides to go on.  Were there ever?  I guess it is really a gardens with sculptures in to wander around and enjoy. 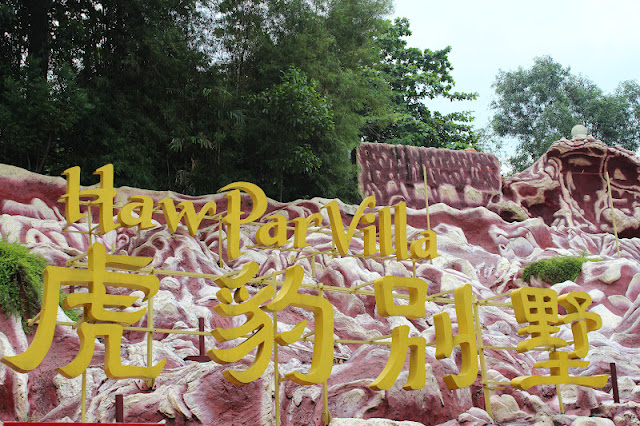 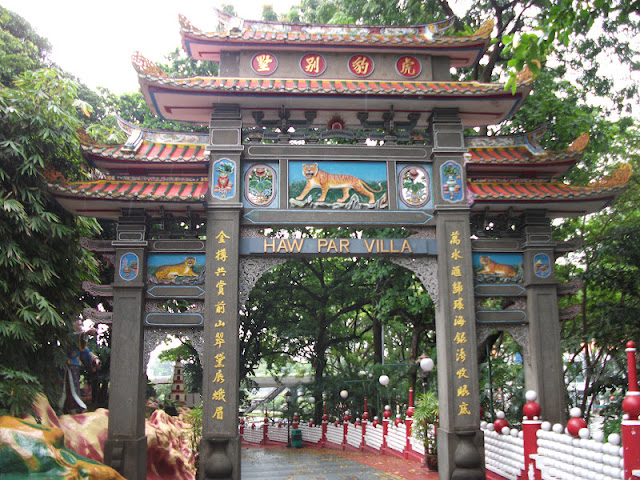 It was opened in 1937 by two brothers, Aw Boon Haw and Aw Boon Par and originally called the Tiger Balm Gardens and was built as a venue for teaching traditional Chinese values.  These brothers were the same people responsible for the development of Tiger Balm (a lifesaver for mosquito bites).  You can see some cute smiley looking tigers (the only cute smiley animals I saw) holding boxes of the product in the gardens.

I've heard that families used to take their children there to scare them.  Before I went I imagined that these days most children would take a lot more scaring then just looking at a few sculptures etc. but having now been I can imagine some young children could still be a bit freaked out by some of the exhibits.  Particularly in the section known as the Ten Courts of Hell.  This is housed in what looks like a cave and as a result there is not much natural light inside.  Here visitors get to see the punishments that you'll suffer after death for various misdeeds you may have committed in your life.  These vary from pretty serious crimes to things such as disrespecting your parents and cheating at exams.  Regardless of the level of the crime though the punishments are all pretty extreme, including being fried in cauldrons full of oil and the dismemberment of body parts amongst many gruesome things. 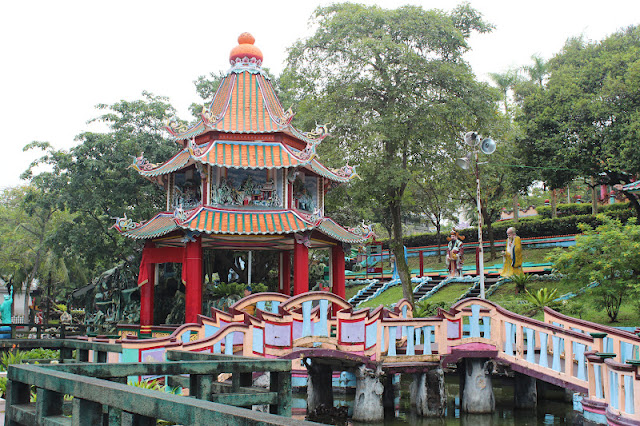 Other than that section though most of the other sculptures in the park have very little in the way of signs to explain what story is being told.  So I'm afraid for me much of it, in terms of understanding the stories was lost, which was a shame.  All I could do was be curious and amused by the scenes being acted out before me and by the expressions on some of the models (particularly the animals) faces. 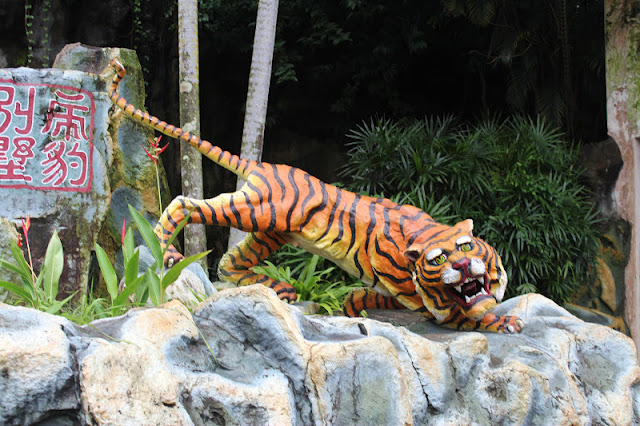 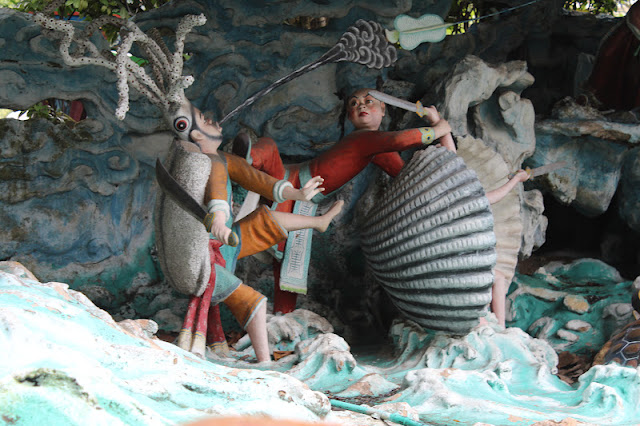 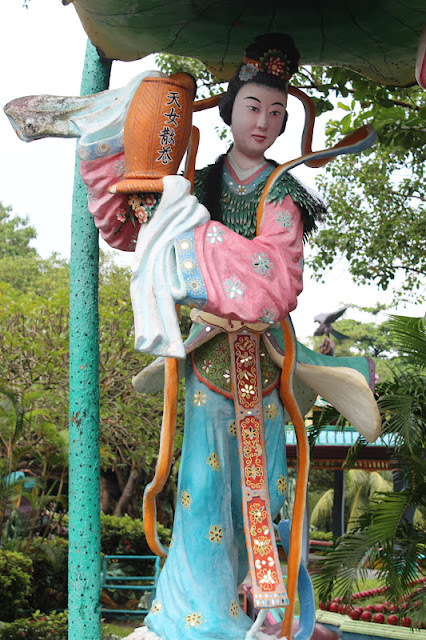 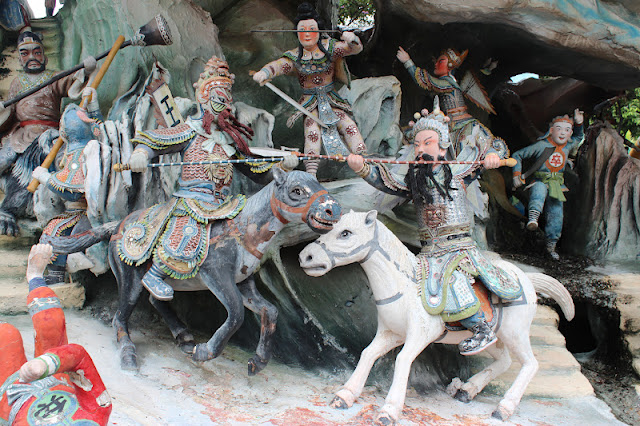 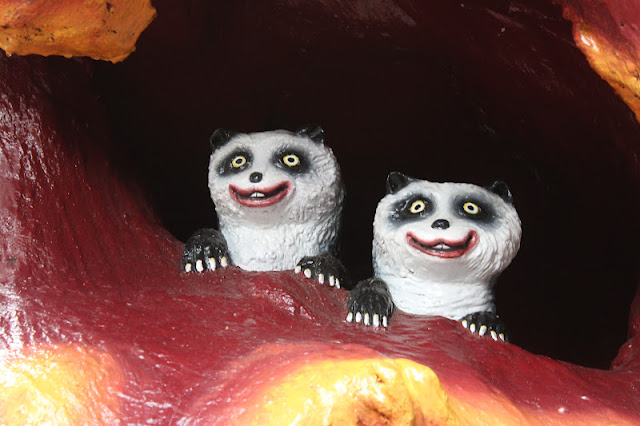 This is one of the more unusual places I've visited in Singapore but I liked it.  If nothing else for the fact it seems like you've stepped into another time in Singapore that has managed to survive almost without being noticed.  It is worth a visit if you are curious particularly as admission is free and it is right next door to the Haw Par Villa MRT.  Who knows how much longer it will last, just before I visited I learnt that the Hua Song museum (within the grounds of Haw Par Villa and somewhere else I would have liked to have visited) has now been closed, but I hope the rest of it can remain as a window into the past.
Email Post
Labels: history photos places to visit random Singapore things to see
Location: 262 Pasir Panjang Rd, Singapore 118628