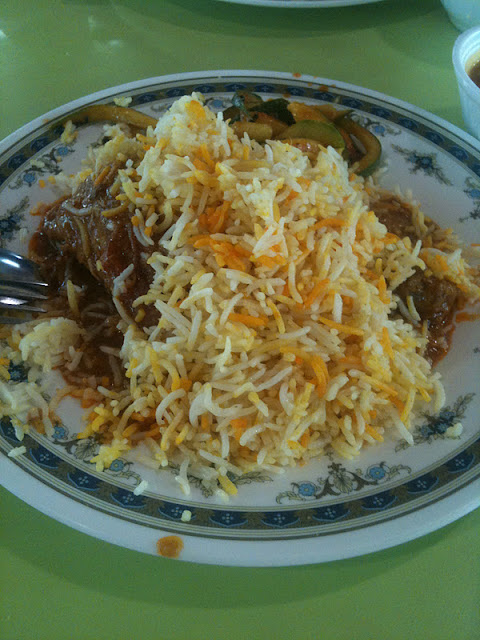 Looks good doesn't it??  Not long after I arrived I became aware of the very popular and famous blog here in Singapore about some of the best hawker food around, I eat, I shoot, I post.  It is well worth a look if you are looking for hints on where to go to try new dishes or find your favourites.  There is now also an app for a certain range of smartphones which my husband recently downloaded and we've been sampling some of the places that have been suggested on and off ever since.  Visiting more hawker centres and food courts was also on a wish list I drew up for myself whilst I was away in the UK last year so even more reason to try it out!

Handily enough for us too there are a few recommended places that are not a million miles from our home so there is absolutely no excuse for not giving them a go!  One such being the Geylang Briyani stall at the Geylang Serai Market.

The first time we thought we'd try it out we did not read the opening times closely enough (it is closed on Mondays) and yes we went on a Monday!  So we ended up eating somewhere else that night.  However on our second attempt we got lucky.  The stall is actually only open until 5pm and given that we figured it was probably very popular we decided we'd better make it a lunch stop rather than an early dinner.

We got there around lunchtime on a Saturday and it already looked like he might be starting to get low.  We got very lucky queue wise and were served very quickly but soon after we'd got ours and started to eat the queue had grown significantly.  Therefore a sure sign in Singapore that it is a good briyani.

Is it worth it?  Yes I think it definitely is.  The stall offers up chicken or mutton briyani, I had chicken which was fantastic but my husband had mutton and if we ever return I think I'll be trying that one as well.  The chicken though was tender and fell off the bone, the rice was wonderful and the dish had just the right amount of spice kick to it for me.  I thoroughly enjoyed it.  My only advice to anyone who thinks they might like to try it too would be, not to leave it too late in the day to go and definitely not to go on a Monday!