Whilst we had the opportunity to enjoy a long weekend, thanks to a public holiday in Singapore, we decided to visit the Titanic Artifact Exhibition at the ArtScience Museum.  We've visited the museum to see previous exhibitions and it is marketed as the, 'premier museum destination in Singapore for major international travelling exhibitions from the most renowned collections in the world.'  From what I've seen there it certainly does get some good things coming to it and this was no exception. 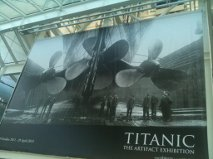 About three years ago I went on a long weekend break to Belfast with some friends and one of the places we visited was the shipyard where Titanic was built.  I've always had an interest in this ship and the tragic events surrounding it so decided I had to pay a visit when I heard about this.  This is a chance to see over 200 recovered artifacts from the site, fourteen of which have not previously been seen before and to learn more about Titanic, from her initial construction, to seeing the impressive reconstructions of what she looked like inside and learning some of the personal stories of those who set sail in that fated maiden voyage. 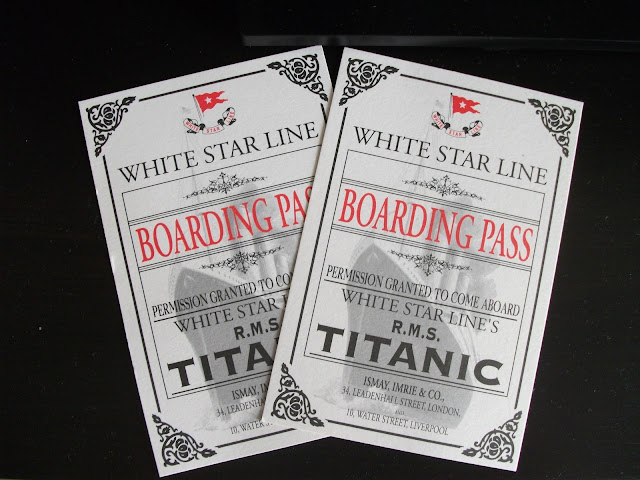 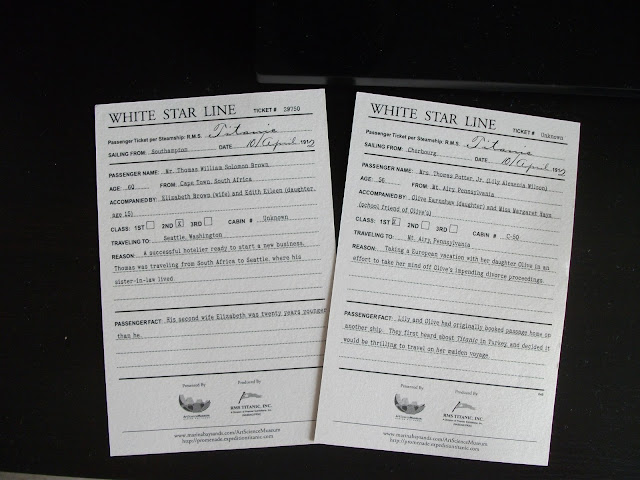 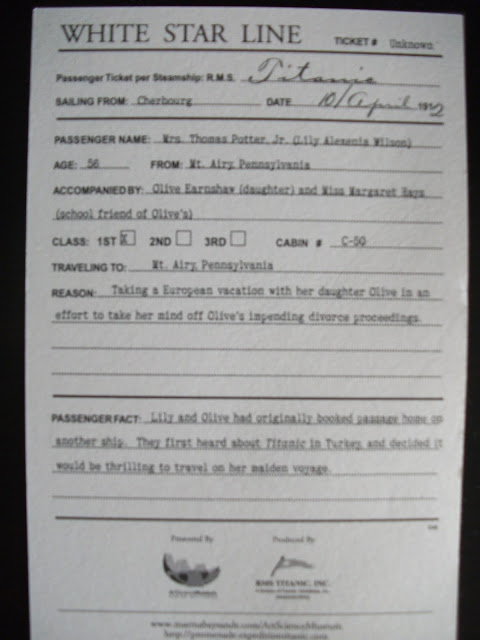 Upon arrival we were all given a White Star Line boarding pass for RMS Titanic, like those in the photos above.  This boarding pass (mine was for the lady in the photo immediately above) was for an actual passenger who was on board when Titanic set sail in April 1912.  As you can see it gave all known details about that passenger, including names, where they came from, where they boarded, where they were going to, the Class they travelled in, who they travelled with, the cabin number (if known), the reason for their trip plus an additional passenger fact.  At the end of the exhibition you then get to find out if 'you' survived or not.  I'm not going to tell you the fate of mine but looking at the full list of survivors and those who did not certainly bought home to me the terrible tragedy of that cold April night in the Atlantic ocean.

On entering the exhibition I was immediately taken back to the Belfast shipyard of Harland and Wolff as the building of Titanic began, here there is information about the conception and planning stages and the desire for her to be the most luxurious ship ever to set sail.  From there we 'boarded' the ship and stepped back in time into the First Class accommodation on Titanic, complete with beautifully laid out replica rooms giving a fascinating insight into what it must have been like on board.  We also got to see some of the public First Class areas including the dining areas and the Grand Staircase.  If you have seen the 1997 film (I cannot believe it was actually made that long ago) you'll be familiar with much of this and this only confirmed for me how painstaking the research for that film must have been.

We also had the opportunity to view the Third Class Quarters and see for ourselves the obvious contrast in the accommodation on offer.  As you proceed through the exhibition dotted throughout are artifacts bought up from the wreck that tie in perfectly with what you are seeing and reading about.  For example, First Class tableware and the fittings and fixtures of this accommodation, personal belongings of passengers and items such as the rivets that were used in the construction.

When we arrived at the Boiler Room display I was reminded again of the film and the efforts made in that to represent the awesome power of the ship as her engines worked to power her forward.  This area also served to remind me of all those unseen people toiling away shovelling coal and the sad fact that the majority of them (if any at all) would not have survived that night.  We then passed through on to the Promenade deck, cleverly designed so that when you looked over the side it really seemed like you were looking into the ocean below and out into the night sky.

We then entered what is probably the most heart wrenching part of the exhibition as we began to see the warnings that had been issued by other ships of icebergs in the area.  Throughout the whole exhibition there are quotes from and reminders, such as the personal effects, of those who set sail on that maiden voyage.  The final part of the display fittingly remembers and respects the human tragedy and the loss of life that night.

Finally we had the chance to learn more about the recovery and conservation of the artifacts from the wreck site.  One thing I did not appreciate was that the wreck of Titanic is gradually disintegrating and that in only a relatively short space of time she will just be a rust spot on the ocean bed and no longer a ship.  The other fascinating thing for more was the discovery of some perfume vials in the personal belongings of a perfume maker who had been on board, which despite having been at the bottom of the ocean since the sinking still emit traces of the fragrance they held!

A fascinating and insightful exhibition which is well worth a visit whilst it is in town.

The museum is open daily from 10am until 10pm (though may occasionally close for private functions so you should refer to their website), with the last admission being at 9pm.