Top 5 Chill Out Bars in the Lion City

For this post I've roped in the assistance of my lovely fiance and he has kindly written this for me based on his experiences.  He doesn't have a blog but he is on Instagram and if you like what you read you can find him @nomadiclancashirelad!  Anyway enjoy as he tells you about the coolest bars in the Lion City.

As my first guest post on this fine blog I thought that I would highlight five cool bars in Singapore that are just swell for a Friday night beer (or one any other time for that matter).

In no particular order of preference, the bars are: -

• 1-Altitude, One Raffles Place (in the old OUB Centre)

This is a cool roof top bar, that has a great Friday night happy hour (up to 8pm), with two for one on jugs of beer, cocktails and wines.  Also they will serve you the second drink of the order later (one could not be expected to drink warm ale, in this climate, just not the done thing, old boy), so the trick is to order and pay for drinks as and when needed up until the end of the cheap period and then cash in the chits to secure your free beers (all happy hour drinks need to be served by 9:30pm).  The snacky food is also excellent, with the lamb chops being a firm favourite.  In terms of ambiance you sit either on comfy sofas or on wooden stools at hip tables and watch the people as they relax into the weekend.  It was here that we met some Singaporean TV star / model, no idea who he was but he had a few hangers on attached to his coattails. 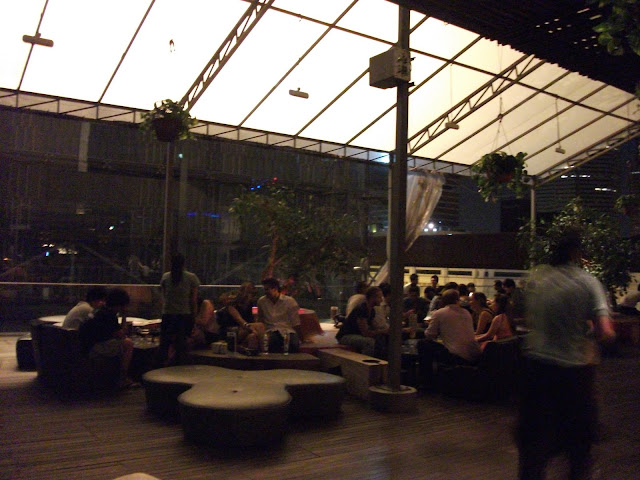 This bar is on the top of one of the tallest buildings in Singapore and therefore has great views across Marina Bay, the Central Business District (CBD) and in fact if you went on a clear night to Malaysia (Truly Asia - as the tourist board advertising campaign states) and Indonesia.  When I attended it started out as a rainy evening (with lightening, whereas I thought that would be cool it was deemed to be a tad unsafe by the management, wusses).  So we were holed up in the downstairs sports bar at first (downstairs is not really accurate as it is on the 59th floor of the building), which has a series of golf simulators available for use.  Once we were let back upstairs we ordered a few drinks, there is a good range of cocktails, beers and wines and a load of comfy sofas and armchairs to lounge around in, but the real reason to be up there is the view.  One quirky thing with our visit was that there were a few spiders, fake body parts and a few zombies dotted around the place, it was Halloween (the waiting staff were also covered in blood and bandages) but I don't think this is a regular thing!

The key feature of KPO, which stands for Killiney Post Office (given that the bar is attached to a Post Office, therefore if the queue in the Post Office is long, one can get a beer while you wait to post your letters back to Blighty), is that there are always flash cars parked outside (the odd Lambo, red or yellow Ferrari, Aston Martin or Porsche). That said one would assume that the drinks prices would be steep, they are not and are in fact amongst the cheapest I have encountered in twelve months in the Lion City (about ten bucks for a pint of draught lager). Additionally the bar sells a wide range of weird and wonderful beers from Belgium and good cocktails (my friends often have a variety of differing martinis, lychee is a favourite). The place to be is outside on the upstairs terrace, lovely on a warm evening (aren’t all Singapore evenings a tad barmy).  Or bliss on a chilled out Saturday afternoon in the sunshine and a perfect escape from the shopping frenzy of Orchard Road, (chaps please note this when your better half is wanting a shopping trip, agree and then slope off for a cool beer).

No. 5 is the reason why I have renamed the Emerald Hill area Downhill, because a trip here on a Friday night is excellent but will lead to a dodgy Saturday and in extreme cases a wiped out weekend. Seriously it is a great place for a cheap martini (two for one on Fridays) or indeed for the nutcases amongst us (I include myself in that assessment) it is not bad for a Jager Bomb or five.  Just stay away from the chili vodka (to be found in a couple of huge vats in the middle of the bar, taunting the unsuspecting victim with its evilness), it is foul, rancid and horrid, never accept one of these from a well meaning adventurous friend.  Bombs aside, the food is good (chicken wings get scoffed very quickly), atmosphere brilliant and boisterous and it is one of only two places in Singapore that allows you to throw the peanut shells on the floor (no prizes for guessing the other one).  Additionally, if it is too busy there is always Ice Cold Beer a little further up the Emerald Hill strip or indeed the aforementioned KPO across the t’other side of Orchard Road.

Blu Jaz
What can I say about Blu Jaz?  It is great.  Food is good (I would recommend the chicken curry or the bar snacks, including fish fingers shaped like fish), service is good (a rarity in Singapore, I mean how difficult is it to get the right drink to the right person in a timely fashion, seems it is a struggle in many bars in the city) and the atmosphere is always chilled out.  A chance find given that it is not in the city (I stayed around the corner when I first arrived in Singapore twelve short months ago) but a good one.  In summary KOOL! 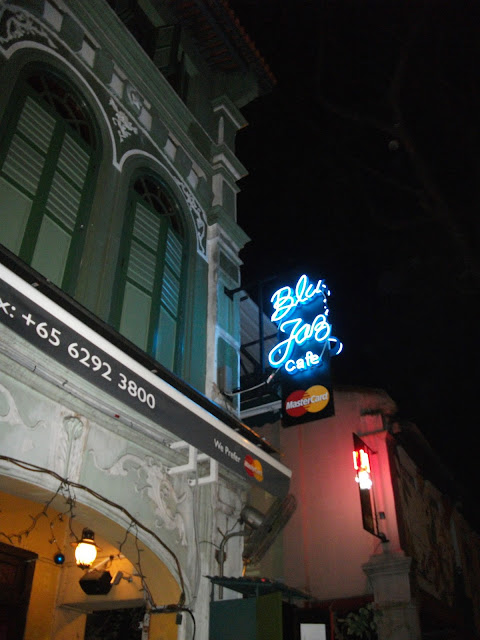 Other notable additions to the list could also be Red Dot (either at Dempsey or Boat Quay), BQ Bar (also on Boat Quay), Harry’s at Chijmes (especially to watch Liverpool play and sadly lose more often than not, UPDATE - April 2015 with the revamping of Chijmes it looks as if the Liverpool supporters club no longer meet at the Harry's, can anybody confirm where they now go to watch matches?), the Indochine on Club Street or Ying Yang (also on Club Street) or perhaps Muddy Murphy’s (off Orchard Road) for a Sunday roast.  Smith’s Chippy on Tanjong Katong Road (UPDATE - January 2016 this branch is now closed. If you want your fish and chip fix you can head to Balmoral Plaza, Bukit Timah Road)  also serves beer and GREAT fish and chips (only missing being wrapped in yesterday’s edition of The Sun).